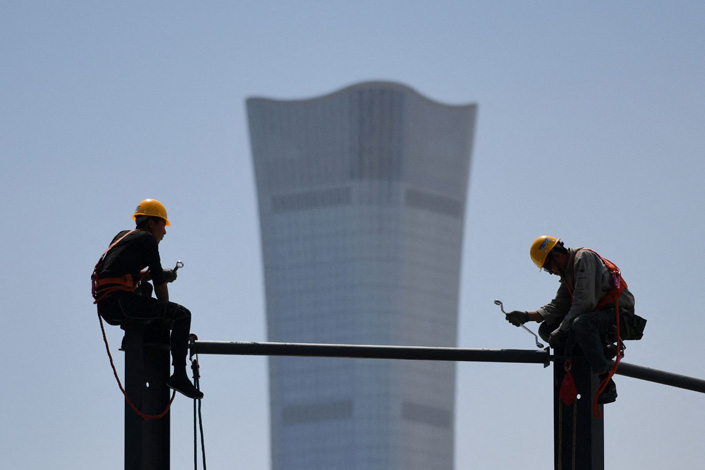 Two workers build a steel structure at a construction site in Beijing in May 2021. Photo: VCG

Over the past three decades, China has implemented and revised its labor regulations in an effort to progress its market economy. Despite the strengthening of labor protection, young migrant workers have fallen through the cracks. Chinese economics professor Li Jingkui believes that the labor reforms have led to the social phenomenon of “Sanhe legends” — youths who are caught in an employment cycle characterized by poor working conditions, low wages and a lack of stability.

Snow fell as China ushered in the year of the Tiger, and it made me think of the “Sanhe legends” (三和大神) who used to huddle outside various labor recruitment agencies in Shenzhen’s Sanhe marketplace. Where were they now? How was life treating them this winter?

Sanhe, the biggest human resources company in Shenzhen’s Longhua district, has given its name to a generation of young migrant workers who hovered in the nearby Haixinxin Talent Market looking for something to do, the “Sanhe legends.” With no fixed address, these temporary laborers were paid by the day and mainly took jobs as couriers, security guards and construction workers, living by the simple mantra: “work for a day, party for three.”

They may have each had their own reasons for becoming a Sanhe legend, but they shared some common traits. Firstly, they had low academic qualifications. Most of them did not go to university, and some did not even attend high school. Even among those who graduated from university, niche specialization made it impossible for them to find their desired jobs.

Secondly, they were unskilled and had no plans to upgrade themselves. Most importantly, they are unable to bear tough working conditions, which is a key difference between them and their parents’ generation. Thus, they choose to be paid by the day, and live from day to day in the small community of the Sanhe marketplace.

They are a marginalized group in society. Some have even long sold their identity cards, are saddled with debt and seldom keep in touch with their families. It is difficult for these Sanhe legends to reintegrate back into mainstream society after living a hard and lackadaisical lifestyle for an extended period of time. In 2020, Professor Tian Feng from the Chinese Society of Social Sciences and his student Lin Kaixuan published a book (岂不怀归:三和青年调查lit. Don't They Want to Go Home: A Survey of Sanhe Youths) detailing the life of Sanhe youths based on first-hand data.

In reality, the Sanhe legends’ survival in today’s era is closely related to a multi-tiered labor demand that has developed in the process of urbanization.

In neoclassical economics, the labor market is thought to be uniform and competitive. But in fact, such theoretical assumptions prevent us from doing deeper analysis of the labor market.

Upon closer assessment, China’s labor market is multitiered, with workers divided into three categories according to how they are employed:

- Employees with formal employment contracts signed between the employer and the employee, with both parties protected by law;

- Employees hired on a “dispatch” or an “outsourced” basis, without a formal labor relationship with their employer;

- Workers such as the Sanhe youth who choose to be paid by the day and do not have a so-called labor relationship with those who hire them.

These three types of workers seem to represent three different social classes. The extent to which they are protected by labor laws not only determines their identity but also their social status. Belonging to the third category of workers, Sanhe youth live in harsh conditions and receive the least legal protection.

As a commodity, labor itself is subordinate to a country’s history and system of governance. And it is also inseparable from the law. The evolution of China’s labor laws not only reflects changes in labor relationships over time, but also promotes the evolution of employment relations.

China’s labor law was reformed in response to a series of social and economic problems that emerged as the country progressed toward a market economy. In 1986, state-owned enterprises implemented the labor contract system (in accordance with the Provisional Regulations on Institution Of Labor Contract System In State-Owned Enterprises) across the board in an attempt to eliminate the ills of lifetime employment and guaranteed job security.

While the Labor Law and its supporting regulations played an active role in regulating and coordinating labor relations, they were also overly rigid and abstract in practice, and could be haphazardly implemented and ineffective at the local and departmental levels. Gradually, they failed to meet the developmental needs of the market economy.

Following a complex legislative process, the Labor Contract Law (劳动合同法) was enacted by the Standing Committee of the National People’s Congress on June 29, 2007 and took effect on Jan. 1, 2008.

The purpose of the Labor Contract Law is crystal clear: “to improve the labor contract system, define the rights and obligations of both parties to a labor contract, protect the legitimate rights and interests of workers, and establish and develop a harmonious and stable labor relationship.”

Clearly, labor protection is important to China, and this impacts enterprises’ employment costs. Employers will try to avoid the high costs of this law as much as possible while still abiding by the law.

The Labor Contract Law appears to have achieved the desired effect in the short term following its implementation. But at the same time, it also resulted in an unexpected phenomenon — a surge in dispatched and outsourced employees.

To rectify employment irregularities and illegal labor dispatches, changes were made to the provisions of labor contracts and labor dispatching agreements, and the revised law became effective on 1 July 2013.

To further enforce the Labor Contract Law, the Ministry of Human Resources and Social Security drafted the “Interim Provisions on Labor Dispatch” (劳务派遣暂行规定), which took effect on March 1, 2014, enacting strict restrictions on the proportion of dispatched workers in a company’s workforce. But the original intentions of this interim provision remained unfulfilled for various reasons.

Figures 1a and 1b below indicate the trend in the number of registered labor agencies and outsourcing companies respectively over the years. Figure 1a shows that while there has been an annual increase in the number of registered labor dispatch companies before 2008, this increase was a gradual one compared with the sharp rise reported after 2007/2008.

The effects of the “Interim Provisions on Labor Agencies” are also reflected in the graph. In 2013 and 2014, the number of registered labor dispatch companies fell, coinciding with a time in which discussions for interim provisions were underway. After 2015, the number of such companies started to grow again, before skyrocketing more recently.

The Labor Contract Law, which was implemented in 2008, aimed to protect the rights and interests of workers and regulate the signing of labor contracts. However, as the above-mentioned data infers, the implementation of the law concurrently set off the proliferation of labor dispatch and labor outsourcing, forming a new dual-structured labor market characterized by different contract structures.

In the 1960s and 1970s, American economist and sociologist Michael Piore proposed a dual labor market theory that divides the market into primary and secondary sectors. The primary sector is characterized by high wages, good working conditions, stability, a safe working environment, standardized management processes and ample room for promotion. On the other hand, the secondary sector is the complete opposite.

Employers in the primary sector were generally larger companies producing capital-intensive goods, which made it easier for them to form an internal labor market, where workers were hired into entry level jobs and higher levels are filled from within. Workers’ wages were also not determined by marginal productivity but instead by which rung of the corporate ladder they are at. This implied that employees could be paid higher than external market rates.

Employers in the secondary sector consisted of numerous small- and medium-sized enterprises. As product demand in this sector changed frequently, these enterprises were not interested in developing an internal labor market, and wages were determined by supply and demand. Among them, workers that were paid by the day best reflected short-term supply and demand of labor.

Professor Tian Feng’s description of the Sanhe youth in his book is similar to Piore’s description of workers in the secondary sector. They were not interested in upgrading themselves to increase their marginal productivity. At the same time, Piore found them lazy, lacking a notion of time, and difficult to work with — behaviors that were completely incompatible with the requirements of the primary sector.

The new dual-structured labor market created by the Labor Contract Law made the division of workers more obvious in terms of contract structures. Workers who were most valuable to companies would enter their internal labor market, sign a labor contract, establish a labor relationship with their employer and proceed to climb the corporate ladder.

Workers whose value was relatively easier to be replaced by the market would choose to enter the labor agency or outsourcing market and wait for a job offer. As for companies, jobs that could be easily replaced by the market, facing great flexibility and uncertainty, would appear on Shenzhen’s Sanhe and Beijing’s Majuqiao job markets.

Sanhe youth belonged to a new generation of migrant workers who were starkly different from their parent’s generation. They no longer held fast to their roots in the villages but lived instead as “semi-urban dwellers.” But at the same time, the city was unable to accept them in a way they had hoped. To city people, the villages were still where they belong. While Sanhe youth each have their own reasons for choosing this way of life, behind their seemingly carefree attitude was the imprint of a society in transition and the institutional context amid the complex ecology of China’s labor market.