By Bao Zhiming and Wang Xintong 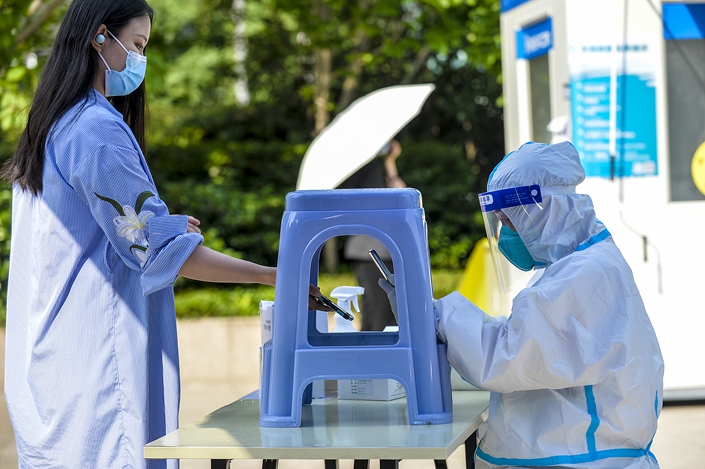 Shanghai is doubling down on strict Covid control measures, including putting some residential neighborhoods back under lockdown, in an effort to prevent another citywide outbreak after a spike in cases followed the city’s reopening last week.

The city has reported 20 cases outside quarantine areas since it lifted a two-month lockdown on June 1. Zhao Dandan, deputy director of the Shanghai Municipal Health Commission, said at a press conference Monday that the city is at risk of an epidemic relapse as businesses reopen and people return to work.

Shanghai will strengthen its capabilities to handle community cases, Zhao said, referring to those spreading outside areas already under quarantine. The city will set up a comprehensive system to monitor the Covid test and health status of residents, as well as fever clinics and pharmacies, he said, adding that authorities will act quickly if any probable cases are found.

The increased wariness by officials highlights the difficulty Shanghai faces in fully controlling an outbreak even after the city imposed its toughest Covid measures, which have taken a heavy toll on the economy and aggravated local residents.

Local authorities have conducted several rounds of Covid testing in some neighborhoods with newly infected patients. They have also upgraded the risk level of 17 areas from low to medium, requiring residents there to stay at home for 14 days.

A disease control official told Caixin that although the number of new infections remains low, they’re scattered in different parts of the city, including Yangpu, Jing’an, Xuhui, Huangpu, Pudong and Baoshan, mostly downtown. The situation poses a great challenge for authorities trying to figure out transmission chains, the official said, while the possibility that the virus will spread further in the community cannot be ruled out.

On Monday, Shanghai tweaked its testing rules, requiring residents who want to ride the subway or bus to provide a negative Covid test result obtained within 72 hours, or proof showing they have been tested within 24 hours, according to local health official Xia Kejia.

The change came after some residents were not allowed to take public transportation because they couldn’t obtain valid negative test results within the required time frame. Since June 1, the city has required local residents to hold such results to enter public venues or official buildings, or to ride subways or buses.