Opinion: Why an External Investigation Will Better Root Out Gang Crime in Tangshan 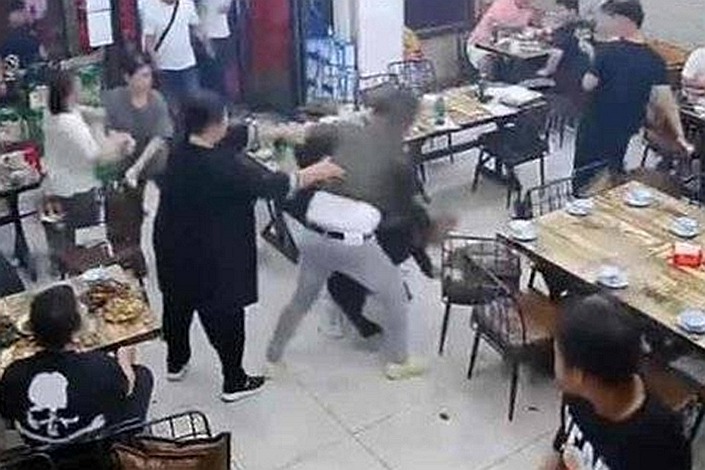 A video image of a brutal beating that occurred Friday at a barbecue restaurant in Tangshan, North China’s Hebei province.

There are new developments in the case of assault on four women at a barbecue restaurant in Tangshan, North China’s Hebei province. On the evening of June 11, the Guangyang Branch of the Langfang Public Security Bureau in Hebei province issued a notice stating that it will handle the Tangshan case investigation, as designated by the Department of Public Security of Hebei Province. Langfang is a neighboring city of Tangshan.

On the morning of June 12, nine suspects were arrested by the Guangyang Branch with the approval of the People’s Procuratorate of Guangyang District, Langfang.

One of the purposes of moving the jurisdiction over a case is to reduce unnecessary distractions, and improve the quality and credibility of how the case is handled. According to the Procedures for Handling Administrative Cases in China, high-level public security bodies may directly handle major and complicated cases, or designate them to other agencies. According to the Procedures for Handling Criminal Cases, criminal cases involving special circumstances may be designated by the public security body at a higher level. In recent years, it has been common to designate jurisdiction over organized crime cases.

There are certain procedural requirements for re-designating jurisdiction of investigations. After the decision to re-designate the case is made, the public security body that originally accepted the case will cease exercising jurisdiction and transfer the criminal suspects, the property involved and relevant case materials to the designated agency.

When it comes to the arrest of criminal suspects, the designated public security agency must apply to the procuratorate at the same level for review and approval. For the case to be publicly prosecuted, the designated public security body must transfer the case to the procuratorate at the same level to investigate. This is why the latest news is that the arrests were approved by Guangyang District People’s Procuratorate of Langfang, instead of its counterpart in Tangshan.

There are some signs worth noting in the cross-regional jurisdiction of the Tangshan case. First, the jurisdiction was designated by the Department of Public Security of Hebei Province, taking the case beyond the city level of Tangshan. This means that the overall planning and empowerment at the provincial level, as well as the follow-up responsibilities, will be shouldered by the province.

Second, the way the case is managed indicates that this is not merely seen as a common street crime. According to Caixin’s investigation, at least five suspects have criminal records. The case has attracted a lot of public attention and there are many questions as things unravel — were local organs hiding information and was there collusion with local gangsters?

Last, the re-designation of jurisdiction helps remove the appearance of any conflicts of interest and allows underlying issues to be uncovered. Cross-regional jurisdiction can, to some extent, prevent suspects and others with interests in the case from interfering with the investigation, giving investigators greater room to handle the case objectively. Judging from previous examples taken from the nationwide crackdown on gang crime in recent years, cross-regional jurisdiction can definitely benefit a case.

However, re-designating investigations does not guarantee a proper outcome, nor does it ensure more openness and transparency. That all depends on whether the investigating agency can eliminate all interference and look into the case based on facts and the law.

How far the investigation can go and whether this web of personal interests can be eliminated will directly determine the results of this high-profile case.

Cross-regional jurisdiction is just the first step to address a vast array of related public concerns. The case has already sparked a chain reaction of criminal leads: people have dug up and shared clues about those involved, and some businesses have reported other local gangsters. And these leads are just the tip of the iceberg of broader issues. Cases of women being harassed and attacked in broad daylight pose a danger to society, while cases of businesses that have reported being blackmailed by gangs shows the risks to the local economy. Whether these vicious powers have been shielded in some way reflects the local political ecology.

It has become obvious that the previous nationwide campaign to crack down on organized crime was far from thorough, thus leaving room for such rampant gangs to operate. It also tells us that there may deeper societal issues. This case, coupled with recent online reports, reveal that common people do not trust the local authorities or feel that they do not respond to complaints of apparent violations. These are signs that things on the ground are very serious.

This case has helped uncover hidden realities and if the investigation can reveal the rest of the iceberg, the credibility of local authorities may be restored. However, if they fail, their credibility will crater.

Zhou Dongxu is a Caixin reporter.