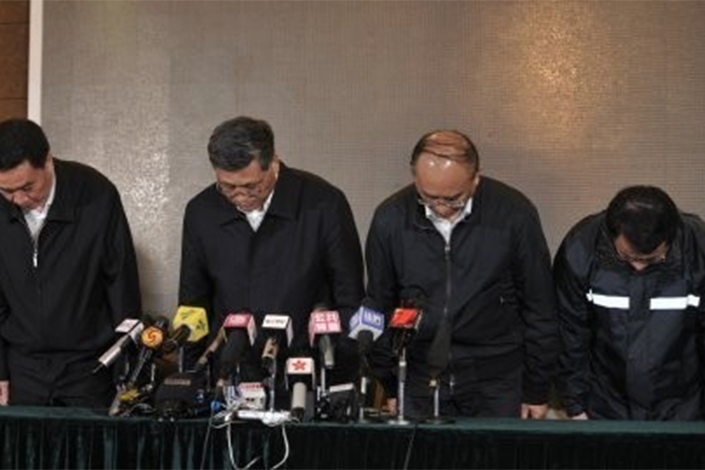 Ma Xingrui, secretary of the Shenzhen Municipal Committee of the Communist Party of China (CPC), made a public apology on behalf of the Shenzhen government for the 2015 Shenzhen landslide in 2015. Photo: CNR

In the spring of 2022, the entire Shanghai was put in strict lockdown, known as “static management,” for more than two months due to Covid-19 outbreaks. When the government released the schedule for lifting the lockdown, professor Qu Weiguo from Fudan University raised a critical voice: “Although the authorities have expressed gratitude to the people of Shanghai, it’s regrettable that there was no apology for the suffering of Shanghai residents over the past two months, which was as a result of the government’s mistakes.”

Public apologies by the government falls within the scope of modern democratic politics and responsible governance; it’s different from the ancient imperial edict of repentance in which the ruler would admit a mistake and reproach himself. In modern politics, an apology from the government is connected to governing legitimacy.

When the government falls short of public trust and expectations due to dereliction of duty, it should apologize to the public. Professor Yu Keping once proposed six elements of good governance — legitimacy, transparency, responsibility, legalization, response and effectiveness. A law-based government is surely a responsible government, but if it refuses to respond to or admit its dereliction of duty, its legitimacy will be questioned.

We often see apologies from governments of Western countries and our neighboring country South Korea. Take South Korea, for instance. In 2005, the then President Roh Moo-hyun issued a “Letter of Apology to the People” for the death of two demonstrating farmers caused by excessive police violence; in 2014, the then President Park Geun-hye apologized to the nation in a televised address for the sinking of the Sewol ferry, a disaster that killed around 300 people, mostly children; in early 2021, the then President Moon Jae-in publicly apologized for illegal land speculation by the staff of the Korea Land and Housing Corporation, and at the end of the same year, he apologized for the government’s decision to once again tighten pandemic prevention measures.

It is said that the act of apologizing is “a process of communication between the past and future.” An apology from the government helps restore personal dignity and the authority of those in power, as well as resolves public-private conflicts. In the Chinese movie “The Story of Qiu Ju,” the protagonist tenaciously deals with bureaucrats just so as to get an apology from an official.

A complete apology should consist of the confirmation of facts, confession of the mistake, expression of regret, shouldering of responsibility and implementation of remedial measures. This should also be the standard for the government. However, some apologies from local governments come in the form of a slap in the face. Chen Yulian is the wife of Huang Shiming, a senior party official. On June 23, 2010, Chen was mistaken as a petitioner by six police officers of the Special Working Group for Petitioners of the Wuchang Branch of Wuhan Public Security Bureau in the CPC Hubei Provincial Committee and beaten for more than 15 minutes. The following month, Zhu Zhengxin, director of the Wuchang Branch of Wuhan Public Security Bureau, summoned two of the police officers before the victim for an apology. The two police officers did not say a word. Instead, they slapped themselves in the face repeatedly.

For the government, apologizing to the public shows its good governance and, in certain cases, the legal obligations to be undertaken. In accordance with Article 35 of the State Compensation Law of the People’s Republic of China, if an administrative organ or its functionaries commit any acts infringing upon the rights of a citizen resulting in severe distress, the organ responsible shall “extend an apology” to the victim. Similarly, there are regulations in Shenzhen that implements a system for government departments to make apologies for dereliction of duty. Those who fail to perform their duties, resulting in serious consequences or severe social impact, shall make an apology to the public.

Drawing from the Anglo-American law system, Hong Kong enacted the Apology Ordinance in 2017, to encourage the issuing apologies as a means of resolving disputes. In addition to civil proceedings, this Ordinance also applies to the Government. Connie Lau, an Ombudsman of Hong Kong, said that the Ordinance “will encourage government departments and public organizations to be more forthcoming in extending apologies where due, as this will certainly help soothe the sentiments of aggrieved citizens and even facilitate speedy settlement of disputes.” She believed that “apologies can lead to effective resolution of disputes, hence restoring social cohesion and mutual trust.”

American scholar Aaron Lazare wrote in his book On Apology that, in an authoritarian society, leaders “never make mistakes” nor do they make apologies. On the contrary, acknowledging violation and expressing remorse is critical to the modern social structure of interdependence. “We tend to view apologies as a sign of weak character. But in fact, they require great strength. It is a behavior that requires of both parties an attitude of honesty, generosity, humility, commitment and courage.”

Peng Yihong is a Shanghai-based lawyer.