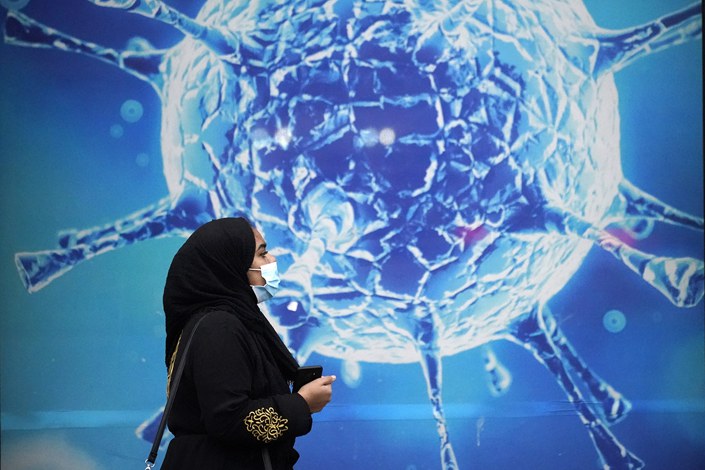 Pedestrians walk past an illustration of a virus outside the Oldham Regional Science Centre in Oldham, the U.K. in November 2020. Photo: VCG

On May 13, the state-owned Science and Technology Daily published an article entitled “Chinese Scientist Discovers a New Drug for the Treatment of SARS-CoV-2 Virus and Obtained Invention Patent Authorization,” which excited readers in the science community and the general public.

According to this report, the applicants are professor Tong Yigang, dean of the School of Life Science and Technology at Beijing University of Chemical Technology, and his team. In Tong’s 2020 paper, he used in vitro cell models to screen 2,406 drugs that have been approved for treating other diseases in an effort to find components that can inhibit virus activity, with the goal of discovering drug candidates that can be used to treat Covid-19. This strategy is called “drug repurposing,” which in layman's terms means “repurposing an old drug.”

Of the 2,406 drugs that were screened, the researchers found three that can effectively inhibit the infection of cells by the virus, with cepharanthine (CEP) showing the best with the result — “10µM (micromole/L) of CEP inhibits coronavirus replication by 15,393 times.”

However, to judge the value of a potential drug, it is more important to look at three other indicators: IC50 (half maximal inhibitory concentration), EC50 (concentration for 50% of the maximum effect, and CC50, lethal concentration 50%. The smaller the IC50 and EC50, the better.

Regarding CEP, it was first isolated by the Japanese scientist Heisaburo Kondo in 1934 and was later used for the treatment of leukopenia, purpura, alopecia areata and cancer-related diseases. It can be found in the plant of the genus Stephania as Chinese herbal medicine and its species of Stephania epigaea Lo and Stephania cepharantha Hayata.

In vitro versus in vivo studies

The news was first published by Chinese academics, followed by multiple international teams. U.S. scientists had also published papers in Science, confirming that the data for CEP is outstanding among the 26 drugs they have studied, and is better than those of remdesivir and paxlovid, which have been approved to be sold on the market.

A review of the literature found that after professor Tong’s discovery, several overseas teams discovered that CEP can inhibit the infection of the virus in vitro. These studies came from South Korea, Japan, Taiwan and the United States.

But it should be noted that the work of these teams was not to verify the efficacy of CEP against the new coronavirus, but to screen different drug libraries, and they have found a number of “existing drugs that can resist the new coronavirus in vitro,” including CEP. From an academic point of view, this is not a verification study. Moreover, the research carried out by these teams is deeper than that of professor Tong's team, especially the two studies carried out by the United States and Taiwan, which involved animal experiments to further verify the efficacy of the candidate drugs.

As known by researchers, drug repurposing has its own advantages. Since the onset of the Covid-19 epidemic, many parts of the world have thought of how to use it to screen drugs for treatment. There isn’t very much innovation in this strategy. It is only because the epidemic was first discovered in China that Chinese researchers took the lead.

Since in vitro and in vivo environments are varied, effective drugs screened by in vitro experiments need to be further verified in vivo. Among the five studies mentioned above, only the ones from the United States and Taiwan have carried out in vivo experiments. The U.S. team chose masitinib and generated positive results while the Taiwan team picked another four candidates with varied outcomes.

The U.S. research team chose masitinib because the drug inhibits the protease of the virus. Since this protease is pro-conservative in evolution, there is no need to worry that the drug would fail to work against a mutated form of the virus. In the mouse model they used, masitinib showed good efficacy.

The research in Taiwan used a hamster model and selected four drugs, mefloquine, nelfinavir, salinomycin and thioguanine. It shows that only the first two have a good effect. This experiment makes mefloquine and nelfinavir candidates for late-stage human clinical trials, and it also shows that antiviral drugs that work in vitro are not necessarily effective in vivo.

It is precisely because these two studies have verified the efficacy of some candidate drugs through animal models, and the clinical trial of masitinib has also been launched, which makes the above studies more valuable, so the research results have been published in the more authoritative journals of Science and the Proceedings of the National Academy of Sciences.

It seems neither team showed enough interest in CEP. Fortunately, in November last year, Cell, a world-renowned science journal, published a study conducted by a team from Tsinghua University and the Chinese Academy of Medical Sciences. The idea of this study is somewhat different from the ones mentioned above. The team first selected host proteins that can interact with the virus and then used clinically approved drugs to test the proteins, and several drugs were tested using mouse models. The study found that CEP can indeed inhibit the infection of the virus in mice.

At this point, we can make a general summary of the research in this field: teams around the world have successively adopted the “drug repurposing” strategy to screen candidate drugs that can treat the new disease, and found dozens of drugs that can inhibit the new virus infection via in vitro study. Four of them — mefloquine, nelfinavir, masitinib and CEP — have shown effectiveness in animal models.

An arduous task ahead

So how far are these four drugs from becoming treatments for Covid-19? It usually takes more than 10 years to go from in vitro study, animal study, and clinical trials to market launch, and the cost can be as high as $1 billion.

Simply put, 5,000 to 10,000 candidates on average are effective in vitro, of which only 250 or so can survive preclinical animal tests. After phase 1, 2 and 3 trials, five might remain, and only one of the five might be approved for launch.

In short, whether a drug can pass clinical trials and government approval requires strict data from large-scale randomized double-blind clinical trials, and it must first be applied to patients with severe symptoms.

However, this does not mean that these four drugs will take that long a time and cost that much money to finally get to market. That’s because these “old drugs” have already been used clinically, and their safety has been verified, so the probability that they can successfully pass clinical trials and approvals is slightly greater.

Compared with shuanghuanglian and lianhua qingwen, CEP seems to have a brighter outlook, because it is about to enter the clinical stage. Still, severe challenges lie ahead. Since the spread of the epidemic has not stopped, it is still worth the try. As for us, we can still hold out hope, but perhaps not that high this time.

Shang Zhou is a virologist based in Germany. The article was first published on the Intellectual and translated by Liao Qiongyao.