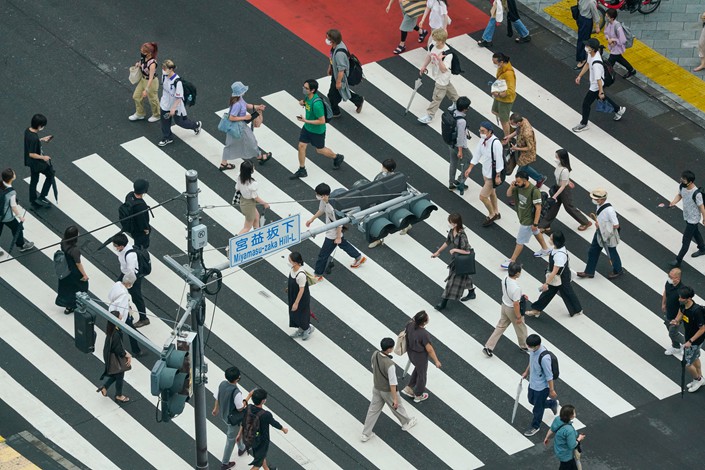 Cases of the BA.5 omicron subvariant of Covid-19 have emerged in the Chinese cities of Beijing, Shanghai and Xi’an. The subvariant, one of the dominant strains circulating worldwide, has also triggered recent outbreaks in other countries such as the U.S. Thus, people are naturally concerned whether the emergence of BA.5 in China will pose a new challenge to the country’s “zero-Covid” policy.

While Western countries are concerned about the ability of BA.5 to escape the antibody responses among people who have previously been infected with the omicron BA.1 and BA.2 variants, this is not such a worrying issue in China, which has seen relatively few cases of those strains. Almost all recorded infections of the BA.1 and BA.2 variants have been in Shanghai, which reported some 600,000 cases during its worst-ever Covid-19 outbreak earlier this year.

To evaluate the threat of BA.5 to China, we must first figure out the success of Covid vaccination in the country. Most people in China have received two or three doses of an inactivated vaccine, with some having had a booster of recombinant protein or adenovirus vector vaccine. There’s not much difference in the face of different omicron subvariants.

A recent study published in The New England Journal of Medicine compared the vaccine-induced immune responses against Covid-19 and its strains including omicron subvariants of BA.2, BA.2.12.1, BA.4 and BA.5. The study, led by Gao Fu, the director of the Chinese Center for Disease Control and Prevention, found that in all three types of participants — who had received three doses of one of two inactivated vaccines (CoronaVac and BBIBP-CorV), three doses of the protein-subunit vaccine ZF2001, or two doses of CoronaVac boosted by ZF2001 — the levels of neutralizing antibodies produced against the omicron subvariants were significantly lower than the levels against the original Covid-19 virus.

Notably, the antibody samples were collected from the test subjects a month after they had a third dose, considered to be a point at which antibody levels peak. This means the levels might continue to drop in the future. The subjects enrolled were also all below the age of 55, so it must be taken into account that the possibility that the immune response in older people may be comparatively much weaker.

Based on these findings, there is a high chance any omicron subvariant could escape immunity and pose a significant challenge for China. To combat the subvariants it is key to look at their commonalities, not at their differences.

Therefore, while BA.5 does pose a great challenge to China’s anti-Covid efforts, the challenge doesn’t come from the differences between the new omicron subvariant and previous ones. It’s entirely possible that a new subvariant will emerge in future — one that will very likely also be highly transmissible and able to escape the immunity built through infection of BA.5.

Ultimately, whether it’s BA.1, BA.5 or the future “BA.100,” the biggest challenge China faces is the threat that omicron will be long-lasting. So, the key to the country tackling the variants is to improve people’s immune status after vaccination.

A potential solution proposed by Gao’s research team is to increase the time between vaccinations, known as the interval. According to the above-mentioned study, for participants who had an interval of four to six months between their second and third dose of ZF2001 vaccine, their neutralizing antibody levels increased significantly against all omicron subvariants. But taking that much longer exposes people to the risk of catching Covid while waiting to complete the vaccination program.

Furthermore, extending the ZF2001 vaccination interval does not apply to most Chinese people. An urgent issue that needs to be addressed is that people who have had three doses of an inactivated vaccine, or two shots of an inactivated vaccine and one recombinant protein vaccine booster — both of which are more widely used in China — showed weak immune responses against omicron.

Authorities could consider giving people additional booster shots a few months after receiving their booster. As of May 7, more than 88% of the country’s population had received at least two vaccine jabs.

But fundamentally, for China to tackle omicron it needs to optimize herd immunity and without effective vaccines that will be impossible.

Zhou Yebin is a columnist at the Intellectual.