Editorial: China Has to Address Its Shrinking Population 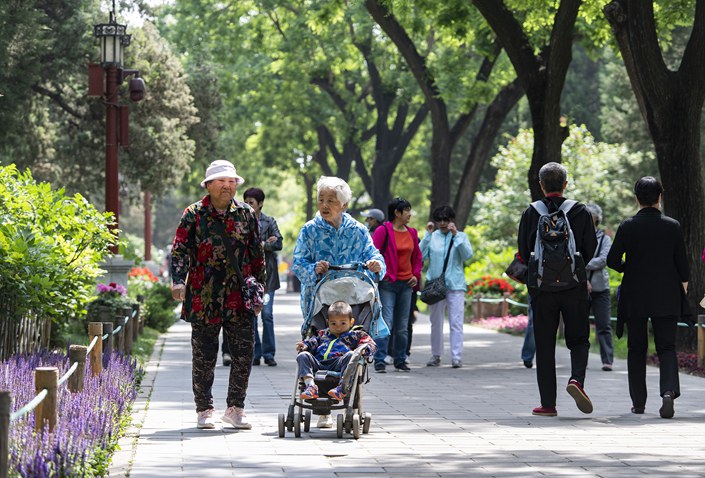 On May 11, seniors walk in Jingshan Park in Beijing. Photo: VCG

China will witness a falling population earlier and harder than expected. The country’s National Health Commission has disclosed that population growth has noticeably fallen during the 14th Five-Year Plan period. By next year, China’s population is likely to start shrinking, the United Nation’s World Population Prospects 2022 showed. China, following Japan, will become the second major power in the world with a falling population. This may be unsurprising, but it will be nonetheless a great shock to society.

Population decline will have an all-around impact on the economic and social development of a country such as China that has benefited significantly from the population dividend. That is how the law of population works, a fact we cannot change but can only adapt to. Regardless of the significance of the impact, the key is to identify how the impact should be best addressed. In the 14th Five-Year Plan, the central government required “the implementation of national strategies to tackle population aging.” Some local governments are looking to tackle the benign interaction between population growth and socio-economic development by optimizing the spatial layout of the population and its public resources. But few measures have been implemented and thus far they have had no obvious impact. With a chronic issue such as the population, long-term solutions are vital and necessary. But China’s response so far has been to push the issue backwards, making any future response more passive. What is needed is some urgency in tackling the population issue. And for this urgency to feed into systematic solutions.

China is dealing with both low fertility and a rapidly aging population. Registered births in 2017 amounted to 17.23 million, a figure that fell to 10.62 million in 2021. The sharp decline surpasses what was anticipated. And this was a result buoyed by the two-child and then three-child policy as well other stimulus measures to encourage childbirth. A low fertility rate is not a phenomenon unique to China, but a problem faced by many countries, especially in the developed world. It is closely related to the number of women of childbearing age and people’s notion of marriage and childbearing. The high costs related to childbearing, parenting, and education are also a major contributor. Still, China is in the emerging and transitional stage of development and is hampered by its developmental level and institutional barriers. Moreover, in past decades, the country has suffered from serious inertia in its population policy. China has many hurdles to jump over in building a childrearing-friendly society.

China’s population is aging fast. From 2010 to 2021, the cohort of the population aged 65 and over increased from 8.87% to 14.2%. If a society in which the 65-plus population accounts for 7% of the total is known as an aging society, one with 14% of the total aged over 65 is a seriously aging society, and one in which 20% are over 65 is a severely aging society. China is already a seriously aging country. Moreover, the distribution of aging in China is uneven. According to China’s seventh national population census, the proportion of 60- and 65-year-olds in the countryside are 23.81% and 17.72%, which are 7.99 and 6.61 percentage points higher than in the cities. Less developed areas, which are less able to cope, face a more dramatic aging problem. China, unlike developed countries, is getting old before it is getting rich, leaving the government with time pressure, and what’s worse, not enough resources or tools to tackle the problem.

Although the shrinking population and aging are irreversible, the problems they pose are not necessarily unsolvable, as they can be tamed by economic and social reform and the unleashing of social vitality. Some developed economies entered the aging phase with lower birth rates earlier than China. Under great pressure, they maintain strong international competitiveness and social vitality. This tells us that the aging population problem is not undefeatable and there are ways it can be handled effectively. The central government has put forward a national strategy to actively cope with population aging. “Actively” means we should not passively respond to problems after they emerge, but make targeted plans in advance, because missing the sweet spot will bring serious consequences. Problems cannot be left in suspense and challenges facing society as a whole require efforts from us all.

Reducing costs, not only economically, is the first imperative in response to the population problem. Taking childbirth as an example, economic conditions are indeed an important factor, as the cost of raising a child in China is particularly high. However, problems such as a shortage of childcare and unattended children are associated with the supply of public services. The work pressure on women after giving birth is connected to the labor security system. Widespread grievances conveyed by the slogan “I’m the last generation of my family” implies bitterness among young people. Social capital involved in the pension industry, but constrained by the existing regulatory system, fails to get the expected return, so investment is falling, resulting in a serious shortage and non-standard supply of pension institutions. Obviously, solving these problems calls for a more intensive supply of public services and the reform of the regulatory system. In addition, dealing with the population problem requires a focus on equality of rights and obligations. For example, in recent years, the extension of medical insurance and pension payment launched in various parts of China should take into account the coordination of all interests, especially intergenerational equity.

The development of an industrial system adapted to the population structure should also be accelerated. Certain labor-intensive industries have already been affected by changing demographics. Some provinces have advanced intelligent reform and the digital transformation of traditional industries. Shortcomings in service sectors such as housekeeping and products for the elderly should be made up as soon as possible, and non-standard business practices affecting the elderly should be strictly regulated. China has relatively complete industrial chains, which gives it space for maneuver. Adjusting the industrial structure in line with the changing demographics brings about rare opportunities to promote high-quality development.

Population issues affect China’s development. Some of the problems resulting from negative population growth can already be foreseen, but some will catch us off guard. In any case, we should take precautions as early as possible to alleviate any possible impact. We strongly expect that while benefits from the population are waning, China can benefit from efficiency and improved systems to boost its economic and social development.