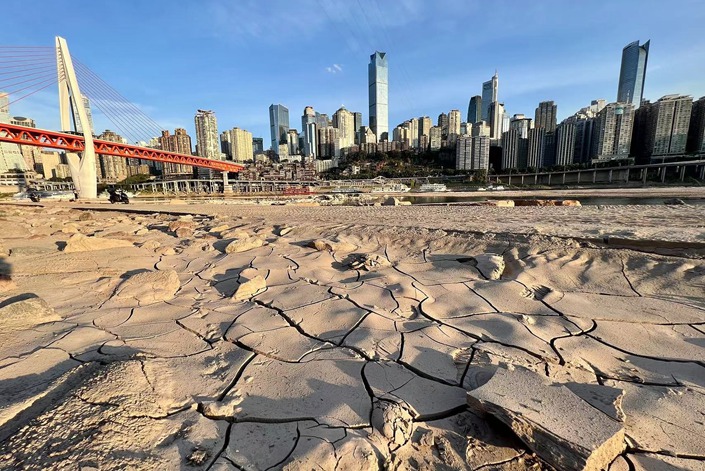 On Aug. 23, the bed of the Jialing River in Chongqing was exposed due to drought. Photo: VCG

The risks are escalating as severe weather continues to ravage China. The Yangtze River Basin, which should be undergoing the rainy season, is now, however, facing severe drought. With Sichuan suffering power shortages, Chongqing surrounded by wildfires and several rivers and lakes drying up, China’s inland southern provinces are facing severe challenges. The country reported an average temperature of 21.3 degrees Celsius in June, the highest record for the same period since 1961. The heatwaves have intensified over July and August. The deadly flooding that swept Henan province in July 2021 is a painful lesson. The cause of long-lasting extreme weather events is a complex topic, where global warming plays a vital part.

There is no doubt we are in a climate crisis, as evidenced by the surge in extreme weather disasters which have lasted longer and covered wider areas as well as caused greater destruction. Extremes are becoming the norm. Humankind is facing an unprecedented challenge in responding to climate change. While we cannot stop it overnight, there are two ways to mitigate the threat. In the short term, we can improve our ability to respond to disasters and minimize their impact and harm; in the long term, we can reduce emissions and scale up clean energy, thus slowing down global warming. However, neither of these approaches is easy. To this day, there is no clear understanding or consensus on climate-related risks. Climate change should be addressed in a systematic manner as it involves many interest groups, institutional barriers and “free-riders.”

China is not the only country that faces more frequent extreme weather. Driven by global warming, the frequency and intensity of extreme weather — heatwaves, heavy rains and floods and droughts — have increased, shown in the Sixth Assessment Report on Climate Change 2021 released by the Intergovernmental Panel on Climate Change, an intergovernmental body of the United Nations. A long-running, severe drought is sweeping the northern hemisphere. Europe is suffering its worst drought in 500 years. The heatwaves have killed thousands of people. Droughts could also lead to food crises. In China, extreme weather has affected all aspects of society, with shipping halted and the water supply shrinking. The water and power shortages in Sichuan have caused the province to limit power to homes and factories, and if the shortage persists, it could spill over to other provinces.

The climate crisis could hurt the economy and society if not handled properly. The United Nations Framework Convention on Climate Change introduced two approaches as early as in 1992. One is mitigation and the other is adaptation. The goal of mitigation is to reduce levels of greenhouse gas emissions, while the purpose of adaptation is to enhance risk management and thus reduce the loss and impact of climate disasters. Though emission reduction has attracted much attention in recent years, it is still lagging in adaptation efforts. While about three-quarters of nations have plans in place to adapt to climate change, many countries are still in the planning stage or lagging behind schedule. In 2013, China proposed the National Climate Change Adaptation Strategy. Recently, it released a new strategy, the National Climate Change Adaptation Strategy 2035.

Ensuring adaptation to climate change is a top priority. The first line of defense against climate risks is monitoring and early warning systems, but this is our weak point now. First, we need to ensure accurate monitoring. Then, after early warnings are issued, the capability to coordinate action across socio-economic sectors is vital. Prioritizing intervention to ensure access to safe drinking water and electricity could reduce losses, even if it cannot prevent disasters from happening. In the 2021 Henan flood, many people were killed in the flooded underground Line 5 of the Zhengzhou subway, a tragedy that could have been avoided if a sound emergency response plan had been in place. China is exploring ways to adapt to climate change, with the sponge city initiative — a flood management measure — being one of them. However, there is still a long way to go to turn words into effective practice. Learning from the past has never been more urgent.

Tackling climate change depends on how much we can reduce gas emissions. Ultimately, new technologies, such as using hydrogen as fuel, could be the key to curbing climate change. Reducing carbon emissions won’t be easy, but it is a national strategy that we must stick to. Given the recent energy crisis caused by the Russia-Ukraine conflict, how Europe will balance the energy crisis and its emission reduction goals is worth our attention. In China, ever since the goal of hitting peak emission before 2030 and achieving carbon neutrality by 2060 was announced in 2020, the central government has taken a series of strong measures, thus creating momentum in many regions. To meet strict emission targets, several cities once cut power directly. Compounded by the economic downturn and energy crisis, achieving carbon emission reduction targets becomes more difficult. How to balance achieving emission targets and sustaining economic growth without going to extremes is testing governments’ capability to govern.

Climate change is a threat to humanity and requires a global effort, which is critical to the future and destiny of the whole mankind, but this effort has been repeatedly hindered. Climate cooperation was seen as an “oasis” in U.S.-China relations, but China was compelled to halt climate talks with the U.S. due to Pelosi’s recent visit to Taiwan. However, the Chinese government has made it clear that it will keep its word and continue to promote international cooperation on global environmental governance issues, including climate change. We hope that all these unpleasant events will start to fade soon.

We only have one Earth. The current global heatwave and drought has sounded the alarm for society: a crisis is around the corner. In this climate crisis, everyone on earth is affected. Taking an opportunistic approach to climate change is short-sighted and sometimes fatal. People from all over the world should join hands and address both the symptoms and root causes of this crisis, implementing both long-term and short-term strategies — this is the best way to save the planet and ourselves.