How Your Work Commute Can Affect Your Mental Health

By Wang Xize and Liu Tao 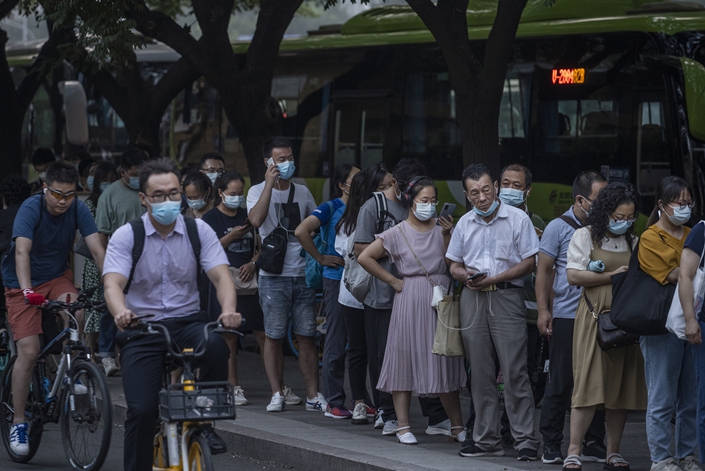 (ThinkChina) – A recent study on 1,528 Beijing residents finds that every ten more minutes spent travelling from home to the workplace leads to a 1.1% higher risk of depression. How would improving people’s journey-to-work experience help policymakers and employers?

In recent years, mental health has become an increasing concern across the world and in China. A nationwide survey in China reports a 6.8% lifetime prevalence rate of depressive disorders. Mental health problems lower the quality of life for individuals and raise medical expenditures for society. Considering the fact that mental health problems are often underdiagnosed, their prevalence and impact may be higher than reported.

Among China’s urban residents, the prevalence of mental health problems is generally higher in big cities than in small cities. Besides therapists and medicine, mental health can also be improved by the daily lifestyles of urban residents, namely their workplace, their home and the journey connecting the two.

In other words, the journey from home to work can impact mental health. Our recent study conducted in Beijing supports this argument. It shows that every additional ten minutes of door-to-door home-to-work travel time is associated with a 1.1% higher probability of depression.

These findings are becoming more relevant as commuting comes under scrutiny in Beijing. In July, the Beijing Transport Institute released the 2021 Beijing Commuting Characteristics Annual Report. People living in central urban Beijing spent 51 minutes on average on their work commute — longer than the common target of 45 minutes for global cities.

Behind the long commute lies increased risks of depression.

Our study is based on a survey conducted in 2018 and covers 1,528 Beijing residents who live in the urban core, central city, suburban and exurban areas. In this sample, 6.1% of the respondents are screened as “depressed.”

Respondents spend an average of 39 minutes travelling from home to the workplace. As expected, the time varies a lot among individuals: some work at home and spend zero time commuting, while some take more than 1.5 hours for a single trip.

The “depressing” effect of work commute is the largest for motorcyclists or those riding mopeds — they have a 1.9% higher depression risk for every ten more minutes on those vehicles. In contrast, there is no “depressing” effect for those who ride bicycles or walk to work. In addition, the effects are relatively larger for those aged 40 and above, and those working blue-collar jobs.

Theoretically, a trip from home to work can be regarded as an “impedance” — a term in psychology describing a person’s difficulty in completing the trip. As such, mental efforts are needed to overcome the “impedance.” It is easy to feel stressed by the commute, and that stress is a contributing factor to depression.

In Chinese cities, riding motorcycles or mopeds is believed to require the highest mental effort: there are no dedicated motorcycle lanes, so the riders must constantly cut through the vehicle and bicycle lanes — a very challenging task that bears crashing risks.

In contrast, the time spent on “active commuting modes,” i.e., walking and cycling, does not contribute to depression. Although a lengthy commute is an impedance, a longer time spent on physical activities has been proven to benefit one’s mental health. This cancels the depressing effect of the long commute.

Those aged 40 or older are relatively more “mentally vulnerable” towards longer commute times. Age causes people to be more prone to the mental fatigue of travelling. People of different generations may also have different expectations of the ideal journey-to-work time, and sometimes, these expectations fall short.

Another group that is more “mentally vulnerable” to longer commutes are the blue-collar workers. One explanation is that they are more likely to use tiring modes of transportation such as mopeds. Compared to white-collar workers, blue-collar workers may also be less likely to have the option of working remotely or following a flexible schedule. Thus, their commute experience is less of a choice.

But not all is lost. Our findings show that enhancing the journey-to-work experience by simply reducing the commute time can improve the mental well-being of China’s urban residents.

Beijing aims to shorten the commuting times for those who live in neighboring cities, and is trialing intercity express bus and railway services.

For local policymakers, initiatives that reduce traffic congestion would have the double benefits of improving transport network performance and mental health. The authorities should also improve the safety of moped riders and motorcyclists: having dedicated moped lanes may be a long shot, but they can at least start enforcing the wearing of helmets.

For employers, improving employees’ commute would also benefit the firms — employees with better mental health are more productive, more satisfied at work and have fewer absences. Companies can grant one or two remote working days per week; the employees can either work from home or at a nearby co-working space. Such measures can effectively reduce their weekly “journey-to-work impedance” and eventually improve their mental well-being.

Additionally, companies can encourage their employees to use more physically active modes of commuting. One strategy is providing vouchers to nudge the employees to ride shared bicycles to work. Cycling improves employees’ mental well-being and reduces carbon emissions, which is a win-win situation for the firms and society.