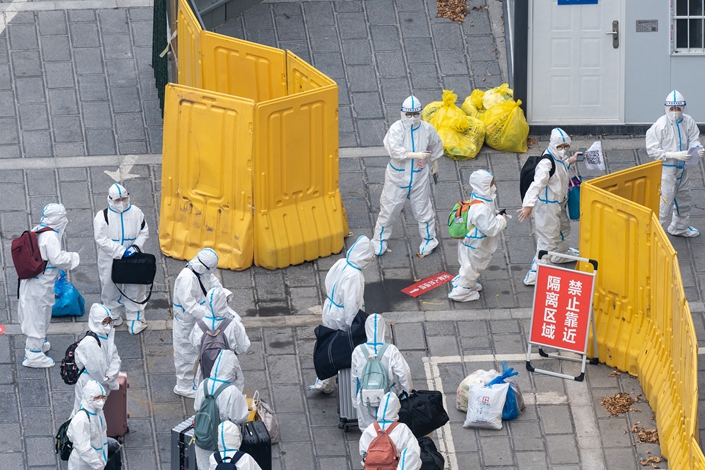 China ended its “circuit breaker” mechanism for inbound flights and shortened the quarantine period for overseas travelers in an effort to “optimize” the country’s Covid-19 response, health authorities announced Friday.

The same rules will also be applied to close contacts of the infected, according to the statement published on the National Health Commission’s website. Secondary close contacts will no longer be identified.

The circuit breaker mechanism was a system that penalized airlines for bringing virus cases into the country by suspending a flight route if a certain level of passengers on a flight tested positive for Covid-19 upon arrival.

Health authorities also reduced the PCR test requirement for inbound travelers to one test within 48 hours before departure, down from the two required previously, according to Friday’s statement.

The new announcement came after the country’s top leadership vowed to “unwaveringly” stick to the “zero-Covid” policy while underscoring the need to minimize the pandemic’s impact on the economy.

“We should pool efforts to eradicate the epidemic in key areas, take more resolute and decisive measures to contain its further spread, and restore the normal order of work and life as soon as possible,” the Politburo Standing Committee said at a meeting Thursday, according to a report by the Xinhua News Agency.

During the meeting which was chaired by President Xi Jinping, the members of the new Politburo Standing Committee, who were appointed after the 20th National Party Congress in October, also called for a targeted epidemic control approach and emphasized correcting excessive local disease prevention measures.

“(We need) to oppose not only irresponsible attitudes but also formalism and bureaucracy, and rectify superfluous policy steps and one-size-fits-all practices,” the committee said in a statement reported by Xinhua.

Covid case numbers continued to surge in China on Thursday, with more than 10,000 new cases reported for the day. The southern manufacturing hub Guangzhou locked down three of its 11 districts and suspended school in most parts as the city battles one of its worst outbreaks in recent months. Meanwhile, certain areas of the municipalities of Beijing and Chongqing also stepped up control measures to curb the spread of the virus.

As one of the 20 measures announced Friday, local governments will be banned from and held accountable for “arbitrarily” implementing control measures such as extending lockdowns, halting medical treatment, closing schools and suspending production.

The National Health Commission shamed several local governments last week for their “oversimplified” approach in dealing with the pandemic. Several localities have since pledged to change their ways.

Friday’s statement also emphasized that local governments should not expand the scope of PCR testing in areas that do not have outbreaks, adding that authorities ought to refine testing requirements and correct unscientific practices such as testing residents as many times as two or three times a day.