Opinion: The Yuan’s Status as a Reserve Currency Could Improve 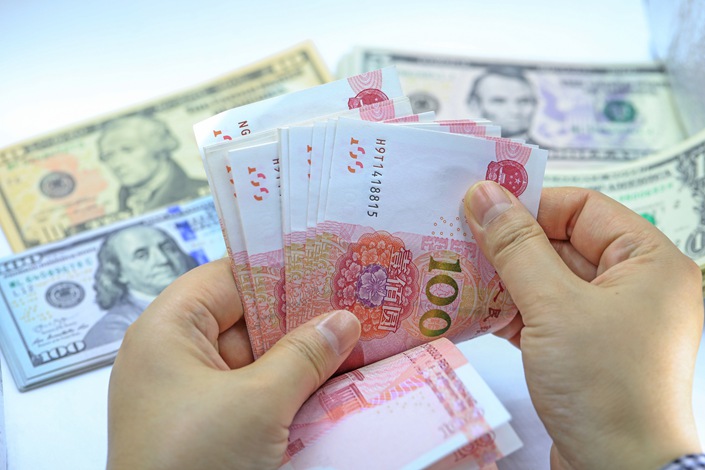 The status of the yuan as a reserve currency may improve in the face of large fluctuations in other reserve currencies such as the Japanese yen and British pound. Photo: The Paper

Soaring American interest rates have sparked a sharp appreciation of the U.S. dollar against other major currencies, and the yuan is no exception. The Chinese currency fell 12% this year against the greenback by the end of September, ranking in the middle among 14 major Asian economies. But the yuan, together with the Hong Kong dollar and the Vietnamese dong, is among the currencies that saw the least depreciation against the U.S. dollar since the end of 2019.

China’s capital account is under constraint, thus its central bank exerts strong control on the yuan’s exchange rate. Over the past few years, the yuan exchange rate has been adjusted against a basket of currencies of its main trading partners, as reflected in the CFETS RMB Index.

Despite the enormous influence of the Chinese government over the yuan’s exchange rate, it is unreasonable to accuse Beijing of manipulating its currency to gain an unfair advantage over other Asian economies. If we evaluate the performance of the Chinese currency since a key overhaul of China’s forex system in 1994, the yuan has performed the strongest when we consider its exchange rate against the U.S. dollar, as well as its nominal and real effective exchange rates. In particular, the yuan has risen 19% against the dollar, far outperforming its Asian peers and becoming one of the least volatile currencies in the region.

Under the current exchange rate regime, China’s average current account surplus (2.9% of its GDP) and inflation rate (3.5%) do not significantly deviate from other Asian economies. The only evidence for such accusations against China of manipulating its exchange rate is that China’s GDP growth rate once far outpaced those of other Asian economies. But that was in fact driven by multiple factors, including that its development was at a certain stage and that its economic reform significantly improved efficiency, and therefore cannot be simply attributed to its exchange rate.

One can perform regression analysis to see the influence of monetary factors on the overall competitiveness of a country. The first is the impact of exchange rates on exports. China’s export data can be best explained by the exchange rate of the yuan versus the dollar, GDP growth of member countries of the Organisation for Economic Co-operation and Development (OECD), which stands for global GDP growth, and the ratio of imports to GDP of OECD countries, which represents the degree of globalization. While the yuan’s weakening against the dollar is favorable for China’s exports, the global GDP growth and degree of globalization may be more important factors.

The second is the impact of monetary factors on GDP growth. China’s GDP growth can also be best explained by the yuan’s exchange rate against the dollar, GDP growth of OECD countries, and the ratio of new total social financing to GDP in China. Among the three variables, global GDP growth is the strongest explanation for how China’s economic growth is highly synchronized with that globally over the past decade. Meanwhile, we can draw a conclusion similar to the first regression analysis: There is a positive correlation between the yuan’s depreciation against the dollar and China’s GDP growth , but the exchange rate is only one of the factors.

If the discussion above holds true, it is natural for the Chinese government to pay more attention to maintaining exchange rate stability, meaning depreciating the yuan in a continuous and orderly manner when the dollar strengthens. The recent weakening of the yuan against the greenback has been much milder than other major currencies, especially those of emerging Asian economies, which are main competitors of China in terms of exports. Given the additional impact of Covid containment measures and a property slump on China’s economy, the likelihood of a further depreciation of the yuan against the dollar in the short term has increased.

Read more
Opinion: What Markets Are Getting Wrong About Yuan Depreciation

Assuming that avoiding sharp currency fluctuations is a top priority for China, the next question is whether the government can ensure stable exchange rate movements. According to the triennial central bank survey of foreign exchange published by the Bank for International Settlements in 2019, the yuan’s foreign exchange turnover remained much lower than that of other major currencies, with simpler transactions involved.

Such “simpler” forex transactions are mainly a result of China’s strict control over the types of trade that are allowed in the yuan and restrictions on its capital account. This means that it is relatively easy for the People’s Bank of China (PBOC) to manage the yuan’s volatility, unless there is a major shift in the currency’s regulation.

The first official offshore yuan market emerged outside of the Chinese mainland around 10 years ago. When the U.S. dollar appreciated from 2014 to 2016, the offshore yuan traded at a much weaker level than its onshore counterpart. But with the yuan’s exchange rate becoming more flexible, the gap between the offshore and onshore yuan has narrowed considerably. The offshore yuan has only been 0.05% weaker than the onshore yuan on average since May 2012, reflecting an improvement in the PBOC’s ability to manage currency stability.

If forex market participants believe that the yuan’s exchange rate can remain relatively stable during this cycle of dollar strengthening, the status of the yuan as a reserve currency may be improved in the face of large fluctuations in other reserve currencies such as the Japanese yen and British pound. Currently the dollar’s share of global currency reserves stands at the top with 60%, followed by the euro at about 20%. The yen and pound each account for around 5%. The yuan’s share is less than 3%, while China takes up 18% of the global economy. After the recent turmoil in forex markets blows over, central banks around the world will be likely to reduce their holdings of the yen, pound and even the euro, allocating more assets to the more stable yuan.