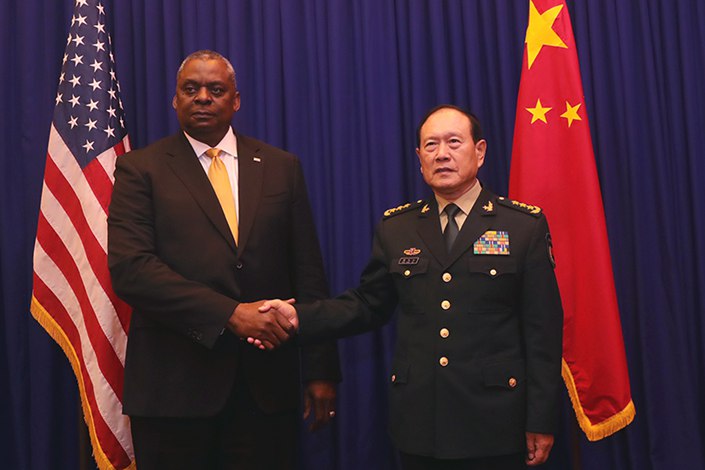 During the meeting, Wei said “the responsibility for the current situation in China-US relations lies with the US, not with China,” according to a statement released by the Chinese defense ministry. “China values the development of relations between the two countries and the two militaries, but the US must respect China’s core interests,” he said.

Wei stressed that the Taiwan question is “at the very core of China’s core interests” and is “the first red line that must not be crossed in China-US relations.”

He added that “the settlement of the Taiwan question is the Chinese people’s own affair, and no external force has the right to interfere.”

Washington maintains an unofficial relationship with Taiwan after switching formal diplomatic recognition from Taipei to Beijing in 1979. Recently, a wave of current American and former officials’ visit to the island, including U.S. House Speaker Nancy Pelosi, angered Beijing and fueled speculation of a conflict across the Taiwan Strait.

The Biden administration has repeatedly said that while engaging in vigorous competition with Beijing, Washington does not intend to seek conflict with China.

During the talks in Cambodia, the two ministers agreed that the two militaries should “maintain communication and contact, strengthen crisis management and control, and strive to maintain regional security and stability.”

Wei told Austin that China hopes that the U.S. will keep its word, honor its commitments, truly implement the consensus reached by the two heads of state, and adopt a rational and pragmatic China policy, so as to bring China-U.S. relations back on track.