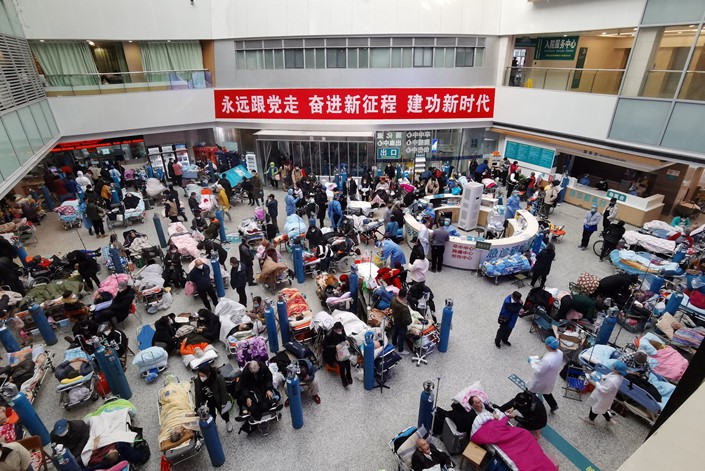 Patients get treated in an emergency room in Shanghai on Jan. 7. Photo: VCG

Although there has been some relief in Covid-19’s impact on Chinese society and the economy, experts predict there will be a resurgence in the virus. The government needs to be prepared, with priority given to building up the country’s health care system. With the change in China’s Covid policy, medical institutions have been under a great deal of stress, and health care professionals have suffered extreme hardship. Some have even given their lives. As the wave of Covid outbreaks eases, now is the time to improve the health care system’s ability to respond to future outbreaks. However, such an endeavor is inextricably linked to reform of the medical system.

Even after Covid emerged, medical reform didn’t get a lot of attention from the public, which was distracted by more urgent matters. The pandemic exposed deficiencies in the medical system, including a serious shortage of medical resources, especially at the community level. It also revealed flaws in the existing medical management mechanism. The past is past, but something can still be done about the future.

Medical reform should not be delayed any longer. Coordinated development and regulation of medical insurance, medical services and pharmaceuticals should be the tent poles of such reform. At the moment, the difficulties are in the medical system. The new medical reform started with the release of the Opinions of the Central Committee of the Communist Party of China and the State Council on Deepening the Reform of the Medical and Healthcare System in 2009. For more than a decade, tangible results have been made in centralized pharmaceutical procurement, medical insurance payment and construction of the medical system. However, some problems remain prevalent, such as less efficient reform of public hospitals, less workable incentives for medical staff and weaker community medical resources. China will further reform the health care systems and promote the coordinated development and regulation of medical insurance, medical services and pharmaceuticals — as clearly indicated in the Report to the 20th CPC National Congress. This signals the deepening of medical reform.

The key to medical reform is to respect the laws about medicine and health care, learn from the experience of other countries, cultivate a stronger sense of responsibility and mission, and continuously promote the reform. Hesitation and policy inconsistency not only damage the confidence of reformers, but also cause the effort to lose public support, potentially allowing this rare window for reform to close. Compared with the pandemic, which only brings short-term shocks, the deepening of China’s aging is a slow variable to promote the deepening of medical reform. The difficulty and expense involved in seeing a doctor has been a concern that haunts all Chinese people. Only by deepening medical reform can we fix this major problem concerning people’s livelihood, better implement Article 45 of the Constitution (“Citizens of the People’s Republic of China have the right to material assistance from the State and society when they are old, ill or disabled”), and allow citizens to live with dignity. China has about 80,000 clinical medical graduates every year, but fewer than half of them can act as doctors. Without the deepening of medical reform, this long-criticized situation will not change. Many people, out of serious misinterpretation or misunderstanding, intentionally or not, blame the high cost of medical care and increasing number of doctor-patient disputes to the reform effort.

The top priority of medical reform is to establish a modern hospital management system. For public hospitals, the absolute dominant force in the health care industry, reforming their operating mechanism is vital. The key lies in the transformation of government functions. It is a basic principle established in top-level design to separate administrative units and public institutions and to separate supervision and operations. Failing to separate supervision and operations will result in overlapping interests, potentially creating conflicts.

Once the interests of one side get damaged, it is very likely to deal with the problem with a conservative attitude and then the reform may be delayed or some regression may occur. As a contributor, the government also has the responsibility of supervision. How to coordinate this with the autonomy of public hospitals is undoubtedly a point of difficulty in institutional reform. In August 2022, Hainan province introduced the Implementation Plan for Promoting High-Quality Development of Public Hospitals. The document clarifies that efforts will be made to promote the de-administration reform of public hospitals, abolish the administrative levels of public hospitals, gradually carry out the professionalization of hospital directors and the appointment system, fully empower public hospitals with the autonomy of operations and management, and employ and manage hospital staff through contracts. Heads of administrative departments shall not be allowed to concurrently hold leadership positions in public hospitals. This measure puts de-administrative reform of public hospitals in the spotlight again, and it is expected to be implemented and advanced.

Perfecting the incentive mechanism for talent also matters. Doctors are subject to long-term education and a high barrier to entering the field. We should not be silent on their income. Notably, medical institutions at the community level offer low salaries that are unattractive to doctors. The income of medical institutions largely comes from medical service fees and financial investment. We should put an end to the practices of hospitals funding their operations with profits from overpriced drugs in addition to advancing the reform of medical service prices. Despite efforts to improve this situation, the practices still exist in many hidden forms. Some authorities have recently proposed that the fundamental solution is to reform the compensation mechanism of medical institutions. Therefore, we should invest a major effort into making the price of medical services more rational, encouraging doctors to run private clinics and offer services via freelance work and gradually turn hospitals into accepting inpatients. We strongly agree with the proposal. At the same time, it is necessary to reduce the institutional constraints on hospitals and strengthen their autonomy in terms of employment.

Whether the medical field needs market-oriented strength hinges on whether social medical needs are met. Amid Covid over the past three years, the contradiction between medical supply and demand, especially the recent overwhelming pressure on medical resources, has given an irrefutable answer.

As the old saying goes, much distress regenerates a nation. But it has a premise — the government and the people are capable of reflecting and acting. The pandemic has sounded the alarm for China’s health care system. Implementing the challenging medical reform may administer the best comfort for medical workers making great efforts and sacrifices. Only by advancing the reform steadily can China accumulate enough confidence to brace for the next public health crisis. This marks the most sincere pursuit of China’s concept of “people first.”