By Wang Jing and Zhang Ziyu 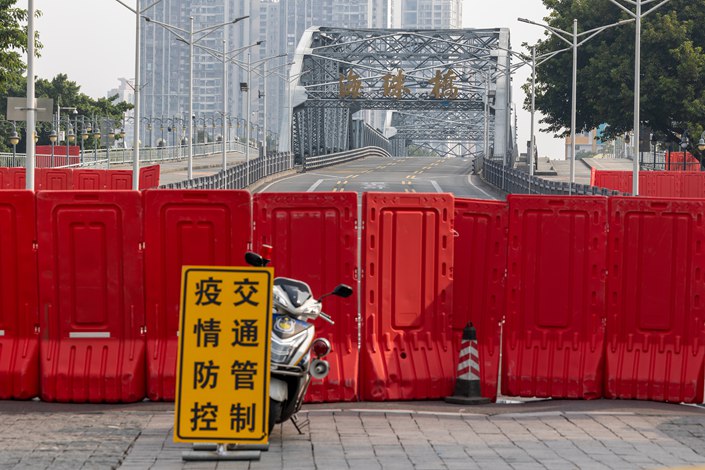 A barricade set up as a Covid control measure blocks traffic on Nov. 11 on the Haizhu Bridge in Guangzhou, South China’s Guangdong province. Photo: VCG

In 2020, governments of all levels in the South China province allocated 30.3 billion yuan to Covid-19 containment measures. That figure increased to 45.4 billion yuan in 2021 and 71.1 billion yuan last year, according to reports published by the provincial finance department.

In 2020, Guangdong used most of the capital for emergency supplies, scientific research, prevention of imported cases, emergency responses, improving testing capabilities, and building fever clinics. The finance department did not disclose detailed spending figures for 2021 or 2022.

Guangdong’s spending ultimately accounted for 2.34%, 3.22%, and 5.36% of its annual general public budget revenue over the past three years, the reports said.

Under China’s strict “zero-Covid” strategy, local governments had to fund hardline measures chiefly with their own fiscal resources.

As one of China’s major gateways to the rest of the world with a large population, Guangdong was faced with “the greatest pressure on pandemic control” among all provinces in the country last year, Governor Wang Weizhong said in the provincial government’s annual work report to lawmakers on Thursday. In particular, he mentioned the major outbreaks in the province’s two largest cities, tech hub Shenzhen and industrial powerhouse Guangzhou.

Guangdong is the most populous Chinese province, with a population of around 127 million as of the end of 2021, which accounted for 9% of the country’s 1.4 billion population.

Wang vowed to shift the focus from “zero Covid” to preventing severe symptoms and boosting vaccination rates going forward, as the case count in the province spiraled upward after “zero Covid” was suddenly dismantled last month.

The situation hit rural areas especially hard, as they have fewer medical resources than urban areas. The province will step up efforts to support the Covid response in rural areas in 2023, the finance department said.