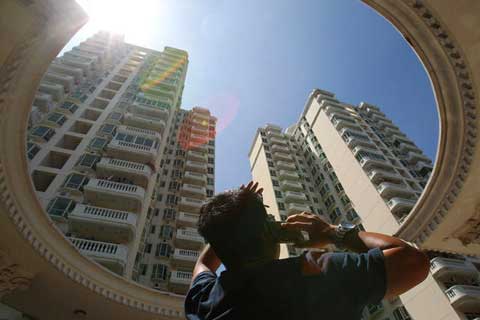 (Beijing) – It is a bad time to be a developer in China because financing is drying up, making even the big companies struggle with debt.

The report also says that the companies' average debt-to-equity ratio at the end of March was the highest level since 2007 – at 86 percent – and the ratio for the biggest 15 companies increased the fastest.

Evergrande Properties, one of the best known homebuilders in the country, has also shown signs of problems. Deutsche Bank, an investment bank, just downgraded its opinion on the company's outlook, advising investors to sell its shares because its debt-to-equity ratio, when classifying perpetual bonds as debt rather than equity, rose to 148 percent last year. That is far higher than the industrial average of 68 percent, the bank says.

Some of Evergrande's plans to raise capital through trust products have faltered, several managers of trust companies said. This is to a large extent because investors think the company is riskier than other big developers, they say, since more of its projects are in small cities where the mainstream view is that the housing bubble will collapse soon.

Banks and other financial institutions, especially trust companies, have shunned many of their former big clients. The banking regulator held a meeting recently requiring banks to be on high alert for risks stemming from the property sector.

Even before the regulator issued the warning, many joint-stock banks' attitudes toward developers shifted from welcoming to cautious, a bank executive said. The bank he works for has changed the directive for property loans from "mild expansion" to "keeping still," and every request for loan to developers in small cities needs to be approved by headquarters, he said.

The bank has also said it would scale back on housing projects in small cities where the supply of homes has apparently outstripped demand, he said. It has also required loan officials not to take on projects in big cities involving a "land king," a reference to a plot sold for a record-breaking price.

It has become harder to get bank loans, especially if the developer is small, said an executive at Sino-Ocean Land, a state-backed developer listed in Hong Kong.

Trust companies have also taken a hard look at property companies. The ratio of capital invested in the sector to the total amount raised by collective trust products nationwide has fallen to 27.7 percent as of April 30, data from Yongyi Trust, an information provider, shows. The figure peaked in July at 45 percent.

"This year, trust companies have really cut back on operations" raising money for property development projects, a manager at a trust company in the eastern province of Zhejiang said. Those that have remained on the client list are being screened more carefully based on their financial strength and the features of projects they plan to build.

He said the unwritten new rules go like this: developers that are not among the country's top 100 or not owned by a local government are turned down; villas are not an option; and projects that are not in major cities and provincial capitals are also ignored.

The trust company has refused many developers and proposed projects that fell short of standards, even when they offered a yield of up to 18 percent, he said. "In the past, a second-rank developer could do, but now even many first-rank developers have been turned down."

Ping An Trust has also narrowed its clients down to only big property companies, a risk manager at the company said.

Many trusts that helped developers borrow money have run into trouble and might have defaulted if the investors did not agree to postpone repayments or the trust company did not take over the debt, the manager at the Zhejiang trust company said.

The annual reports of several trust companies for last year show that more of their own investments have gone sour. Ping An Trust saw the ratio of bad loans in its proprietary business reach 1.73 percent, up from 0.21 percent when the year started. The ratio for Citic Trust was 7.93 percent, compared with the 7.77 percent at the beginning of 2013.

Normally, the ratio would not be so high – and climbing – because trust companies are prudent with their investments, an analyst familiar with the industry said. But if they purchased troubled products from investors to avoid a public default, the ratio would increase as the toxic assets become their own, he said.