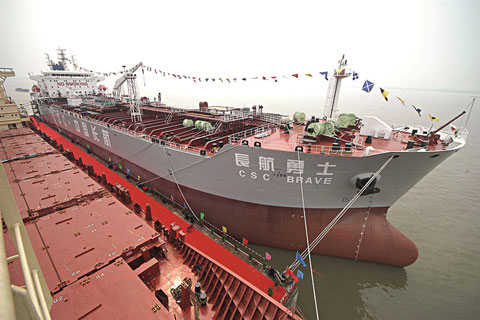 (Beijing) — The exposure of a massive amount of off-balance-sheet debts at Nanjing Tanker Corp., a state-backed crude carrier on the verge of delisting, has rung alarm bells for both regulators of state assets and investors.

A bank has also taken action, asking a court to freeze assets because the company has failed to repay nearly US$ 90 million.

Research jointly conducted by Caixin and the British shipping industry journal Lloyd's List found that from 2005 to 2008, Nanjing Tanker, a subsidiary of Sinotrans & CSC Holdings Co., secured US$ 1.28 billion in loans from 19 banks in 11 countries through off-balance-sheet financial arrangements to fund its fleet expansion during a shipping industry boom. Commitment to the borrowing, which financed 10 very large crude carriers (VLCCs) and 10 medium-range tankers, is one of the major reasons the company faces insolvency. However, this has never been properly disclosed by the company.

On May 28, the China Securities Regulatory Commission, said it received complaints from investors that the company violated listing rules by withholding information. The commission said an examination of its financial reports is underway. By the end of March, nearly 150,000 investors held Nanjing Tanker's shares, mainly individual shareholders.

Listed in Shanghai in 2007, the company's share price surged to a peak of 26.99 yuan in January 2008, but then experienced a continuous decline. On May 28, the stock closed at 0.75 yuan. According to listing rules, the last trading day for Nanjing Tanker will be June 4.

China Development Bank, one of Nanjing Tanker's major lenders, said it had to apply to a court in Beijing on May 26 to freeze some of the company's assets as it failed to repay US$ 83.97 million to the bank.

The aggressive expansion into maritime transport by Nanjing Tanker, previously a river carrier, started in 2006 when the opening of a China Petroleum & Chemical Corp. (Sinopec) pipeline threatened its crude transport business along the Yangtze River.

In the face of increasing reliance on oil imports and the dominance of foreign freight companies in maritime crude transport, the National Development and Reform Commission, the country's top economic planner, initiated a plan in 2006 to strengthen domestic crude shipping companies and increase their market share from 10 percent to 80 percent.

To seize the expanding demand, Nanjing Tanker aggressively expanded its fleet size. British shipping consultant Clarksons said that within five years Nanjing Tanker had the sixth-largest fleet in the world. Its VLCC capacity was eighth in the world and the largest in China. The company said it operates some 87 vessels totaling 8 million dead weight tons, including 19 VLCCs, 33 mid-range tankers, and chemical and asphalt tankers.

Then the market soured and shipping prices fell. Information from the Baltic Exchange shows VLCC profitability peaked in July 2008 at US$ 150,000 per day, but dropped to minus US$ 12,051 per day in October 2011.

The fixed rent under the long-term leasing contract put added pressure on Nanjing Tanker amid the market slowdown. The company reported a net loss in crude transport business in 2011 with gross profit margin of minus 6.1 percent. This grew to minus 11.5 percent in 2012, and the figure was minus 10.7 percent last year.

A source close to the company said Nanjing Tanker's trouble was triggered by an internal struggle at Sinotrans & CSC that can be traced back in 2009, when a government-guided merger started.

In the hope of getting a stronger position in merger talks, CSC launched a series of expansions, including encouraging its crude transport subsidiary Nanjing Tanker to head into the deep sea.

However, the marriage has produced unbalanced results and internal conflict has never been pacified. Companies on the Sinotrans side have outperformed those on the CSC side. In 2013, CSC reported a combined loss of 8.8 billion yuan, including 5.9 billion from Nanjing Tanker. The combined loss of Sinotrans & CSC was 79.9 million yuan. Many sources inside Sinotrans are concerned about the impact of CSC on its performance. An executive at Sinotrans & CSC said its debt-to-asset ratio is nearly 113.5 percent.

Executives at Sinotrans & CSC have also disagreed on how to deal with the trouble. Some want to give Nanjing Tanker high-quality assets to help it out, but others want to see market forces play out.

In June 2013, a management reshuffle enhanced the Sinotrans side of management's control over the group, led by chairman Zhao Huning, who supports using market approaches to solve the Nanjing Tanker problem.

Xu Jiandong, a spokesman for Sinotrans & CSC, said: "We will follow the market approach. We need to insulate the group and the listed company (Nanjing Tanker) to secure our assets. We will not allow the crisis to spread to the whole group."

"CSC has suffered since 2011, but many problems have been hidden," an executive at Sinotrans & CSC headquarters said. "Since the personnel reshuffle last year, more issues will be exposed."