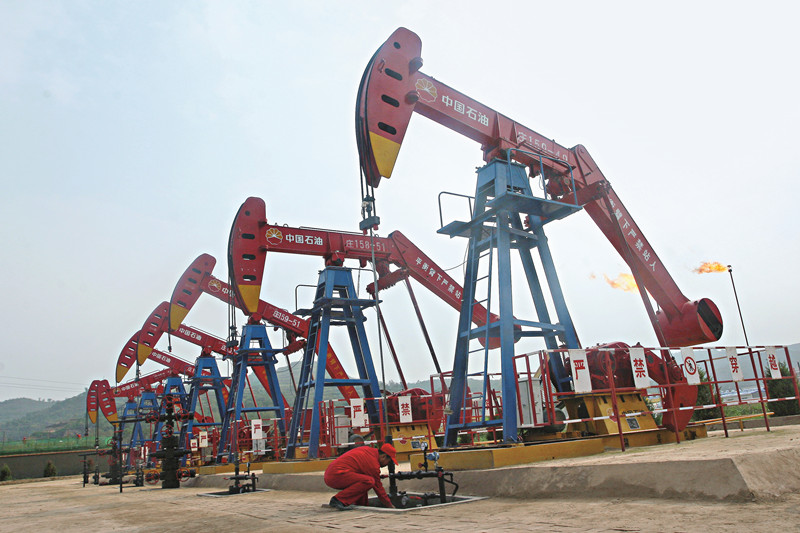 (Beijing) – Yang Guoxing was one of the earliest private entrepreneurs to provide drilling services to state-owned oil giant China National Petroleum Corp. (CNPC). His company has survived in the competitive market for more than 20 years, but 2014 will be the "hardest one yet," he says.

For private businesses like Yang's, oilfield exploration and development has always been a tough market to enter. CNPC's and China Petroleum & Chemical Corp.'s subsidiary service providers control 85 percent of the oil exploration services and equipment market, leaving about 2,000 private companies competing for the rest, a report from UBS Securities said.

CNPC's Changqing oilfield in northern China's Ordos Basin hires more private service providers than any other oilfield in the country. In 2008, Changqing began recruiting outside help from private businesses, mainly because internal service providers could not meet the production goal set by then general managers Ran Xinquan and Wang Daofu. But the model of development was questioned after both were removed from their posts for graft last year.

Since then, Changqing has vowed to shift its focus from quantity to quality and take efforts to clean up corruption in the bidding process. This means some 1,200 private oil service companies, which have become used to the old way of doing business, are among the first to pay the price of fighting corruption.

CNPC cut spending starting last year and plans to cut another 7 percent this year. The company's planned workload in exploration and drilling fell by 16 percent from the year before. At Changqing, which was known for large-scale production in the past few years, the drop in drilling-related work was nearly 70 percent.

Changqing has increased production of crude oil and natural gas, from 10 million tons in 2003 to 45 million tons in 2012, becoming the most productive oilfield in the country. Its two general managers in this period, Wang and Ran, were recognized by for CNPC chairman Jiang Jiemin for the boost in productivity, sources from the company said.

On August 27, the Communist Party's anti-corruption watchdog began probing the two. Jiang was removed from office in September.

Criticism of Changqing's blind pursuit of production volume became louder after the sackings that shook CNPC, which began to change its development model.

"The year 2013 is an important turning point of our company," Zhou Jiping, chairman of CNPC said at an annual meeting in March. "The decrease in capital spending is due to a shift from expansion to a development of better quality."

Yang said he felt the change directly. "Our construction team only has one-tenth of its usual workload, so many workers are on vacation and the equipment sits idle," he said.

The company's revenue last year was 200 million yuan while the expected revenue for this year is around half that, Yang said.

A total of 1,034 rigs were operated at Changqing in 2013. This year, the number has dropped to about 500. As of the first quarter, about 600 rigs are sitting idle, including those operated by state-owned companies, costing at least 150 million yuan per day.

Tighter credit is making things even worse, Yang said. Because CNPC usually pays contractors at the end of each year, private businesses usually operate on loans in between.

"In the past, we could use contracts as collateral, but this year the banks know work is slow, so it is almost impossible for private companies to get loans," Yang said.

Small private oil service companies may be driven out of business this year, he said.

Changqing once tasted the fruit of opening up to the private sector, but the process it used to incorporate private companies became a breeding ground for corruption over the years.

In 2008, Ran set an annual production goal of 50 million tons of oil. CNPC's internal providers could not meet the demand, so Changqing began asking private companies for help.

At one point, private firms accounted for 70 percent of all the oil service companies working at Changqing, CNPC said. Changqing added about 5 million tons of capacity each year and saved nearly 2 billion yuan by hiring private companies.

Oil service companies within CNPC are overstaffed, expensive and inefficient, Yang said. The entry of private companies benefits CNPC despite taking up a part of its market share in the oil service unit.

"In the past, Changqing rarely organized bidding that was truly open," an employee at Changqing who worked on bidding process said. "It invited certain companies to submit bids or decided which companies to give contracts to at internal meetings, which left a lot of room for shady deals."

The bidding office was just a formality, the source said, because departments had their own offices in charge of bidding.

In addition, to be qualified for bidding, companies had to obtain the approval of a sub-committee at CNPC, which also oversaw the company's subsidiary oil services providers.

The design is unreasonable, said the senior executive at the listed private oil services provider. A government agency or an industry association should be the ones giving out approvals.

"That's like having your competitors decide whether you can be part of the competition," he said. "They are both the athlete and the referee."

As a result, it has become an open secret that corruption was rampant in the bidding process. A common practice at Changqing is for private oil service companies to create third-party companies and pay "public relations fees" to the managers at oil companies, said a source at an oil service company in Xi'an, capital of the northern province of Shaanxi.

Multiple managers in charge of bidding or procurement at CNPC have been investigated or moved to other posts. Business at his company dropped a lot this year partly because of the need to build new connections at oil companies after the position changes, the source said.

Given the backdrop of the continuing corruption probe at CNPC and frequent rumors of managers falling from grace, at the beginning of the year Changqing launched open bidding for drilling projects. But most contracts went to CNPC's service companies. Many private companies that used to win contracts were left empty-handed.

Oil exploration developed at a fast pace in recent years, so private companies at all levels could all get contracts, but investment has slowed and workloads have fallen, so there must be a more open and fair way to determine who gets the job, the senior executive at a listed private oil service company said.

"The oil services market has finally begun to open to private companies in recent years and a few have even become able to compete with international oil giants," he said. "There is corruption in the bidding process, but you can't shut the door completely because corruption exists."

Private oil service companies must first rely on connections to get contracts, survive and then grow in such a concentrated industry, he said. After they become more competitive, these companies hope to establish a more open and fair competition mechanism, but if they stop paying "public relation fees," they will lose contracts to less competitive companies that pay it.

"This is the paradox created by monopoly," he said.