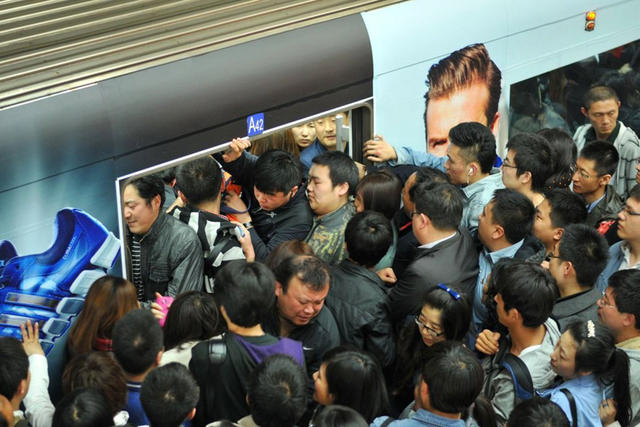 (Beijing) – The capital's economic planner has been mulling revamping the city's subway fare system, which has been criticized for causing overcrowding and requiring billions of yuan in government subsidies every year.

The city's development and reform office said it received feedback from more than 40,000 people and organizations from July 3 to 20 regarding a proposal to amend the system, and, according to its announcement, more than half of the respondents approved of higher fares.

The current ticket price for all passengers on Beijing's subways and light rail networks is 2 yuan regardless of the distance travelled. Shanghai charges up to 11 yuan per ride as the travel distance increases.

In Chengdu, capital of the southwestern province of Sichuan, a subway ticket is valid for only two hours. In Beijing, it can be used any time before midnight on the day it is issued.

The regulator has not decided how to change the fares, but there is no doubt that it will roll out a plan to increase them by the end of the year, a source who works with a subway construction firm said.

Experts say they support the move, although their reasons for more expensive fares vary. Some say it needs to be done for safety reasons.

The number of passengers on Beijing's railway network has exceeded 10 million every day on average, said Yang Xingkun, an associate professor of engineering at Beijing University of Civil Engineering and Architecture. That is almost half of the city's population of permanent residents.

A subway train's capacity is normally capped by regulations at six passengers per square meter, Yang said. That means Beijing needs at least 6,250 six-car trains or 4,760 eight-car trains to transport the 10 million passengers safely. That is much more that the city has, he said. He did not say how many trains Beijing's subway system has. No official data is available.

In rush hour, a train can pull into major stations roughly every minute, even though the designer says the spacing should be at least two and a half minutes, the source said.

Jia Shunping, a professor at Beijing Jiaotong University, said the regulator has vowed to solve the problem by raising fares. In a December announcement, the city government has said it would use a layered pricing system to spread out passengers and reduce crowding during rush hours.

The economic thinking behind the argument is that higher prices would encourage people to choose other means of transportation such as taking a bus or riding a bicycle. If ticket prices are higher during peak hours, people who are not particularly in a rush may hold off journey until later.

Raising fares is important because subsidizing the operators has proven to be an increasingly heavy burden on the city government. The money could have been spent better elsewhere, says Cheng Shidong, an urban transportation expert in a research institute under the National Development and Reform Commission, the country's top economic planner.

Data from the firms shows that the gap between their combined ticket revenue and operating cost has widened from 169 million yuan in 2007 to 3.46 billion yuan last year.

The cost of maintenance rose fast partly because the network is larger and there are more. During that period, 12 new lines opened in Beijing, expanding the length of subway and light rails in the city from 142 to 465 kilometers, the data shows.

The most costly items are electricity, equipment maintenance and salaries, a source familiar with the situation said. Electricity alone cost operators about 4 to 5 billion yuan a year, he said.

Other factors contributing to higher expenses include preparing emergency plans and installing air conditioners in trains and offices, the building source said.

The capital's government used subsidies not only to make up the difference but also to pay for Beijing Subway's renovation and system upgrades worth 13. 4 billion yuan, the data shows.

The companies did not reveal the details of their operating costs and how they used the subsidies.

"No one is sure about the accounting details because asset management in the subway system has been so fuzzy," the subway building source said. "Every year, (the operators) report a figure (for overall expenditure) to the city's finance department, and no one has dived into the detailed catalogues."

The city government has been mulling several proposals regarding a new fare system. At least two of them, as seen by Caixin, recommend linking fares to the distance traveled. One also proposes imposing a four-hour limit on the validity of a ticket. Its prices range from 3 to 5 yuan. The other proposal's most expensive ticket costs 10 yuan.

The current fare system was implemented in 2007 as part of a plan to encourage people to use public transportation, experts say. The price of a ticket was fixed at 2 yuan because "back then the subway network was not so long," said Jiang Yukun, former director of Beijing Subway Design and Research Institute.

It was also because the old ticket-checking machines and the operators' information systems were unable to handle differentiated pricing, he said.

But things have changed. Now the subway system is significantly larger and both the infrastructure at stations and the operators' computer systems are mature enough to deal with more complexity, he said.

"In principle, the new fares should at least cover subways' basic operating costs," an official with the Beijing Traffic Management Bureau said recently.

The goal might be achieved if every passenger pays 5 to 6 yuan on average for a ride, the subway building source said, adding however: "The real situation is very complicated, and it is still too early to tell."

Increasing fares is not the ultimate goal, he said. In the absence of a reform that makes the operating companies' financials more transparent and their work more efficient, whatever positive effect a new fare system can achieve will quickly fade, he said.

Compared with its Hong Kong-invested competitor, Beijing Subway has been criticized more often. The state-owned enterprise has lagged behind Beijing MTR in many areas, the subway building source said. Beijing MTR manages three subway and light-rail routes in the city.

"Following its Hong Kong investor's model, Beijing MTR has been able to keep down operating costs and use capital efficiently," the source said. This is to a large extent because every aspect of its spending must be approved by the budget and fall in line with the company's economic target, he said. In contrast, Beijing Subway's financial management is much less coordinated.

"It attends to every glitch promptly and the cost of repair is usually low," the subway building source said. "Beijing Subway, however, always waits until the problem gets serious and fixing it requires much more money."

Staff redundancy is another problem, the source said. As an SOE, Beijing Subway is required by the government to provide jobs. "Having three security guards at every checkpoint is an arrangement that speaks more to the government's employment target than efficiency," he said.

These are problems that can be solved only through competition between operators, said Cheng, the urban transportation expert. The government can start by getting a clear picture of the revenue and cost of subway operators, then determine subsidies to them based on their performance and efficiency using capital.

Cheng also urged improvements to the bus system, arguing that low cost of riding by train was not the only reason people choose subways.

Like many other urban transport experts, he criticized Beijing's bus network for being unreasonably designed, resulting in traffic jams and considerable delays.

Many bus stops are too far away from each other and many subway lines do not have an alternative on the road, said Jia, the professor at Beijing Jiaotong University. Raising subway fares cannot fix the city's transportation problem on its own, unless the bus network is improved so it appeals to commuters more.

Allowing commuters to customize routes and improving bus services, among other things, can help ease the pressure, he said. "Different people have different expectations for public transportation. There is no one-size-fit-all solution."