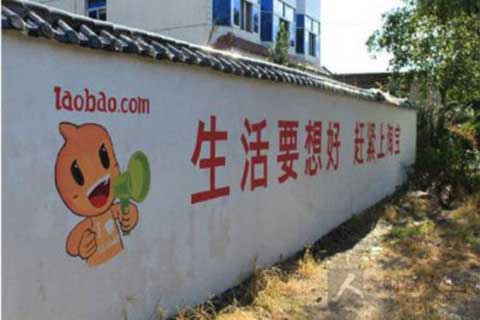 (Changsha) – China's major e-commerce giants and the government are following through on plans to turn the country's huge rural areas into new markets. The efforts are linking hundreds of millions of villagers to e-sales websites, while also creating sales channels to urbanites for everything from farm produce to tickets for lesser-known tourist spots.

E-commerce giants like Alibaba Group Holdings Ltd. and JD.com Inc. see China's large number of rural counties as a new possibility for growth after getting city dwellers hooked on buying goods from websites. Meanwhile, the government hopes the new business activity can lift some desperately poor areas out of poverty.

Alibaba and JD.com, an e-retailer, launched large campaigns last year to reach out to rural areas, where nearly half of China's 1.3 billion people lives. As a result of those campaigns, banners with large characters promoting e-commerce have started appearing on walls in villages around the country.

In July, Alibaba hosted a conference bringing together more than 170 officials from counties in 26 provinces and regions around the country to discuss e-commerce. The meeting near Alibaba's headquarters in Hangzhou, the capital of the eastern province of Zhejiang, allowed company representatives to meet some of the country's lower-level leaders, who expressed a desire to bring their areas' agricultural goods and tourism resources to the attention of the increasingly powerful urban consumers.

Zhang Yong, Alibaba's COO, said in October that the firm will spend 10 billion yuan over five years to set up 1,000 offices in counties and 100,000 more in villages to facilitate the new business. The hope is these offices will ease the flow of goods between urban and rural areas, and help residents of rural areas get used to online shopping, he said.

The same month Alibaba signed an agreement with commerce officials in Zhejiang to start work on building logistics and training facilities in the counties and villages of the province. The facilities are intended to help farmers make online purchases that at least initially will have to be settled in cash because most villagers do not know how to make payments through the Internet.

Alibaba employees are also going to help farmers take photographs of agricultural products such as radishes, cabbages and chestnuts that are put online, hopefully whetting the appetite of city dwellers.

There's some evidence that this effort is working. On November 11, a major promotional day for Alibaba, its e-sales websites took nearly 1,300 orders involving 210,000 yuan worth of goods from a rural county in Zhejiang named Tonglu.

JD.com started working to connect with villagers earlier than Alibaba. In May, the company cooperated with the Ministry of Agriculture to launch a campaign that invited villagers to shop on its website.

The next month JD.com sent a team of employees on a six-month tour of more than 100 counties around the country. At each stop, locals were invited to events where they learned how to shop on the site for goods such as clothing, books and groceries, items China's urbanites buy with ease.

To get the goods out to the new shoppers, the company has started building a distribution system to cover more than 1,000 counties, opening more than 500 distribution centers and training thousands of deliverymen.

Liu Qiangdong, JD.com's founder, said in February that his company's distribution centers also handed the installation of home appliances and other necessary services for more than 60,000 villages. To get these washing machines, refrigerators and televisions out, JD.com hired more than 2,000 deliverymen devoted to the home appliance business.

JD.com launched a pilot of its program in Zhaoxian County, in the northern province of Hebei. The company convinced Jin Xinlong, the owner of a small service shop for home appliances, to become JD.com's first distribution center in the county. Jin said this required him to follow stricter standards to run his business.

In July, the ministries of finance and commerce chose 55 poor counties to receive 20 million yuan each to develop their e-commerce industry in a bid to reduce poverty. One of these counties was Tongshan, in the central province of Hubei, which had per capita GDP of 4,000 yuan in 2014, compared to the national average about 46,000 yuan.

Tongshan has opened a Taobao shop to sell tickets for its main tourist attraction, the Jiulong Mountain scenic area. In the past, the area sold about 1,000 tickets a month, Hu said, but the online store has pushed that figure up to 10,000. Then local hotels got into the act, launching promotions on tourism websites such as Ctrip.com and Lvmama.com.

Tongshan then went a step further, setting up a service center led by Jiang that e-commerce companies in the county could turn to for help. The center helps the firms manage their presences on JD.com, Tmall and Yhd.com, another e-commerce site.

The county then trained the owners of Internet cafes to help villagers buy and sell products online, Hu said. In the past, the Internet cafes had made money by illegally allowing children to play video games, she said, but the new source of profits gave them a reason to turn the youngsters away.