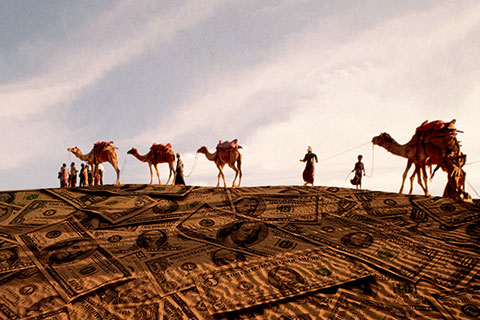 In late March, on a small island in southern China, the liberal world order, the basis of global economic prosperity since the end of World War II, was tested. At the annual Boao Forum for Asia, China was asserting its case to lead a new development bank, the Asian Infrastructure Investment Bank, which will rival the U.S.-led World Bank and Japanese-led Asian Development Bank (ADB). Speaking to the delegates, Xi Jinping explicitly announced China's political motivation "to build a new regional order."

The United States refuses to join and has asked its allies to put policy first and insist that a new bank enunciate its commitment to the explicit principles of good governance before soliciting membership. Nevertheless, the U.S. resolve to maintain institutional cohesion around shared principles is going unheeded. Eyeing potential commercial opportunities, the United Kingdom, France, Germany and Italy are among the many allies that have joined the Chinese initiative.

The advantages of adding infrastructural capacity, more railways, ports, roads, telcos, is irrefutable. Throughout developing Asia access to transportation, water, electricity and other utilities is inequitable and of poor quality. The developing regions of East Asia need more infrastructure, lots of it and more than any current configuration of financial institutions can supply.

Yet, infrastructural investment has had limited direct effect on poverty and increasing its supply does not guarantee that poor people can use it. Infrastructure can boost GDP growth, but autocratic countries, even those with above average income levels, perform poorly on social indicators. While important for economic growth, the benefits to the poor from more infrastructure have been less than expected and are frequently undermined by weak governance, poor institutions, distorted public investment choices and inadequate maintenance.

Recognizing that the key to reducing poverty resides in the linkages between infrastructure and governance, the mature multilateral organizations such as the United Nations Development Programme, the World Bank and the ADB combine their infrastructure projects with efforts to strengthen governance and institutional frameworks. Concern about its impact on poverty reduction is why the investments in infrastructure by multilateral organizations as a percentage of their total investment portfolio diminished during the 1990s. The shift in allocation reflected a consensus that capital shortage was not the main inadequacy in developing countries and that institutions to improve governance and to reduce corruption were necessary before capital investments could be productively employed.

Chinese infrastructure investments follow a contrary logic, one that exalts the philosophy of noninterference in the recipient's sovereignty. It will leave all these thorny questions about governance unattended.

But the Chinese premise – that not encroaching on the internal governance regimes of borrowers will render infrastructure investment "apolitical" – is naive. Infrastructural activities are gigantic opportunities for political incumbents and contractors to rake off surplus revenues and to make distribution decisions that consolidate political loyalties that extend their grip on power.

Seventy years of hard-won development experience stand behind this realization that institutions for accountability within countries are necessary for the successful implementation of infrastructure programs to ensure that the poor benefit. Weak legal frameworks, rule enforcement and competition in procurement are the underlying reasons the expected social benefits do not accrue to the most vulnerable segments of the population. For infrastructure to help reduce global poverty, it must be combined with better governance and stronger institutions – those that separate the private and public interests of leaders.

China might have chosen another path toward shouldering more responsibility for world development by supporting the poverty-reducing mission of the World Bank community and by contributing to infrastructure within the framework of existing donor institutions. Adding to the capital base of those institutions will make its case for a more institutional voice far more compelling, leaving the United States with no reason to be coy about expanded Chinese influence in those institutions.

But by breaking ranks with the very difficult work already underway of building accountable governance in the countries where it is so badly needed, China offers the world's poor an alternative that does not promise to be any brighter than what they now enjoy.

The goal of international lending should be strengthening the linkages between good governance and infrastructure: When these linkages break down, it is usually the world's poor that are the victims. Aligning politics and commerce with policy is the best way to fight global poverty.