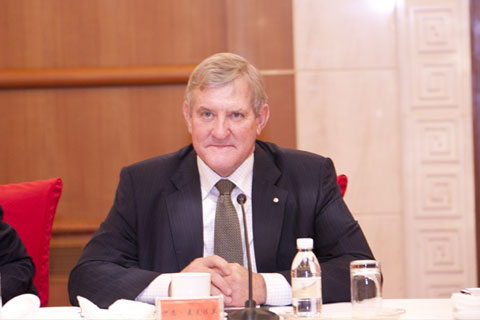 (Beijing) – Australia recently signed a free-trade agreement with China after completing similar deals with Japan and South Korea. When Australia's minister of industry and science, Ian Macfarlane, visited Beijing on July 1 and 2, he discussed these FTAs with Caixin, saying the focus was on market access and investment opportunities.

Macfarlane admitted Canberra does not have the details of its trade policy for China fully fleshed out, "but we do want to make sure to eliminate barriers to investment between our two countries, and the FTA will definitely address that."

Macfarlane also touched on other issues, such as possibly getting Chinese consumers interested in kangaroo meat and worries that some Australians have expressed about property prices being pushed up by Chinese home buyers.

Caixin: Australia has signed bilateral free-trade agreements with Japan, South Korea and China. Will this cause those three counties to compete for the Australian market?

Ian Macfarlane: Australia has strong trade relationships with each of those three countries, but each relationship was changed in unique ways by each FTA. Competition has always been there, and the free-trade agreements haven't changed that. The relationships with Japan, China and South Korea rely on different elements. Each of them has areas that we would like to strengthen, and each agreement also has areas that have already been developed in full. For instance, the China free-trade agreement is a very, very comprehensive and broad free-trade agreement. Free-trade agreements aren't about taking away competition. They are about providing market access and investment opportunities in both directions, in addition to the necessary technology and science that goes into education and research. The world economy is tough, and the increased access provided by the FTA will benefit all of us, while maintaining the competition between countries.

Which Chinese companies and/or government departments would you like to meet or have met?

Primarily, we want to meet with the ministers of government departments. For instance, I met with the minister for land and resources (Jiang Daming) this morning. That was my third meeting with him in two years, so we have developed quite a relationship. I met with the head of CNPC (Zhou Jiping) and the head of the Bank of China, and I'm meeting with the minister for science and technology (Wan Gang) this afternoon. I met him last year when I was up here. I'm especially keen on furthering that discussion because we are very interested in using science to improve our manufacturing and processing techniques, so that we can in turn improve our products, both in Australia and in China.

I also met with people who might help Australia to export kangaroo meat to China, which is definitely a new thing for this country. It's not a new thing for Australia or the rest of the world, in fact. But since it's new here, the focus of my meeting with the delegation was first to emphasize that kangaroos are not endangered. There's twice as many kangaroos in Australia as there are people, so that's a lot of kangaroos. And second, to explain that the processing of kangaroo meat is very hygienic and safe.

Globally, free-trade agreements are recognized as great opportunities. What's your specific plan for this FTA with China?

We don't have many of the specifics for our trade policy with China figured out yet, but we do want to make sure to eliminate barriers to investment between our two countries, and the FTA will definitely address that. In the future, we hope to encourage greater Chinese investment in Australia. Australia is an export-dependent country. We don't have a big domestic population – 23 million people – so it's quite small in terms of population. So, when we think about China's population of 1.3 billion people, we automatically see great market opportunity. Therefore, unhindered access to Chinese markets is very important to us, as is cooperation between our two countries.

The Australian government has a plan to further develop its Northern Territory. What role do you think China can play in this process?

Well obviously, China is already involved in the Northern Territory in Australia, in the mining and gas industries, in addition to several others. The Northern Territory involves the oil industry, and the Chinese want to build plants there. The Chinese are involved in agriculture, as well. They've invested in the sugar cane industry, and have expressed interest about investing elsewhere. There are definitely a lot of good opportunities for China in northern Australia.

How does the Australian government plan to promote Australian resource and energy companies in China?

We have not worked out specifics for such promotion, but Australia is one of the few countries in the world that is actually a net exporter of energy, so we consider ourselves an energy superpower.

China's investment in energy projects in Australia has been very successful. They've also invested in networks, like the electricity grid, and that's been successful as well. In the future, there will be many opportunities for privatization in New South Wales. So in terms of how your government looks to those companies and supports them, that's not so much an issue for us. We are happy to see their investment in Australia as long as it is for both our countries' benefit. Any investment has to pass through the Foreign Investment Review Board, but the board's primary concern is simply whether or not investments will benefit Australia. China has presented hundreds of propositions, and not one has been denied. All have been successful, so we're naturally very happy with that.

Some Australians have complained that Chinese investors have caused house prices in Australia to rise. What are your thoughts on this?

People are entitled to their views, but I don't think that you can attribute rising house prices to Chinese investors specifically. We established a set of rules, as well as an application process, for purchasing property in Australia. In terms of my experience, particularly in agriculture, investment from China has been very good for Australia. Had the Chinese not bought Cubbie Station (a large cotton-growing operation in Queensland), then that property would have been broken up, its irrigation ability would have been destroyed, and the cotton plants on it would have disappeared. People sometimes don't have all the information when they make comments like that. There are a lot of issues that contribute to housing prices.