Racing toward a Population Cliff 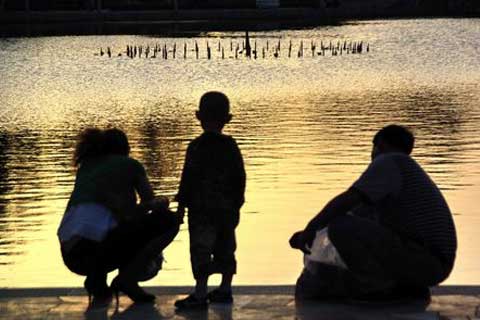 This makes the worries among Chinese researchers and the public that the population will collapse absent drastic corrective measures seem unfounded. However, a closer look at the historical data from the UN shows it has always overestimated the growth of China's population.

From 2000 to 2015, data from the National Bureau of Statistics (NBS) indicate the population rose by no more than 109 million people. The median estimate made in 2000 by the UNPD for the same period, however, said the growth would be 135 million. It also predicted that China would have 1.46 billion people by the end of 2050. Over the years it had to lower the figure repeatedly to reflect the actual changes. In 2010, the estimate was reduced to less than 1.3 billion.

In 2010, the UNDP revised its estimation for China's fertility rates from 2010 to 2015 to 1.31, 1.56 and 1.81 in three scenarios. But even the lowest figure was still higher than NBS' highest number. That means the real fertility rate of the population from 2010 to 2013 could be lower than the most conservative estimate by the UNPD. Despite this, the organization's most recent estimate of China's population by the end of the century (1.04 billion) was actually higher than its estimate of 941 million five years ago.

This seems odd considering that UNPD's estimates about the populations of many other countries often seemed conservative. Why does it overestimate China's population? The reason probably has to do with family planning authorities.

The 2000 NBS census suggested that China's fertility rate was only 1.22. But the final result was changed to 1.8 because the then Population and Family Planning Commission – which has been folded into the National Health and Family Planning Commission – insisted that many people did not truthfully report how many children they had. This revision had been widely questioned by critics.

Ten years later, data from the 2010 census suggested that a more accurate fertility rate back then was about 1.34. From 2010 to 2013, NBS surveys showed fertility rates ranging from 1.04 to 1.26. Officials from the family planning commission, however, still claimed that the rates were between 1.5 and 1.6. Not surprisingly, the UNPD's forecasts about China's population from 2010 to 2015 were based on a fertility rate, which the officials would agree, of 1.55.

Ironically, the family planning authorities have been fond of citing research from the UNPD to support their views about the country's population in advertising to the public and advocating policies to the central government.

The divergence between UNPD's estimation and reality will only widen over time. Currently, less than 17 million people are born in China every year. Within a generation, the number will probably shrink to only 6 million at a fertility rate of 1.4 and based on the assumption that there will be 44 percent fewer women aged from 23 to 28.

The decline will continue. We expect that the population by the end of the century will fall under 600 million, lower than the lowest estimate by the UNPD.

Even this could be too optimistic because we assumed a more favorable policy environment than what we are seeing. More importantly, the established social institutions and public opinions on child-bearing, which discourage birth, will continue to affect the population for generations to come even if the government reverses its stance on family planning overnight. The shrinking of China's population will not stop by the end of this century; it may become worse after that.

This paints a very different picture about China's population than the one by the UNPD. In fact, despite all sorts of evidence suggesting that the country is neck deep in a population crisis, family planning authorities and the UNPD have continued to spread misleading information that blinds people to the cliff we're racing toward. This is also why we have not been able to relax the one-child policy even more. In fact, lifting all restrictions on child birth is not enough now. The government must start encouraging birth like all other countries with low fertility rates.

Huang Wenzheng is a biostatistics expert at Johns Hopkins University. Liang Jianzhang is a co-founder and chairman of Ctrip.com International Ltd. This is a translated excerpt of a commentary they published on Caixin's Chinese website