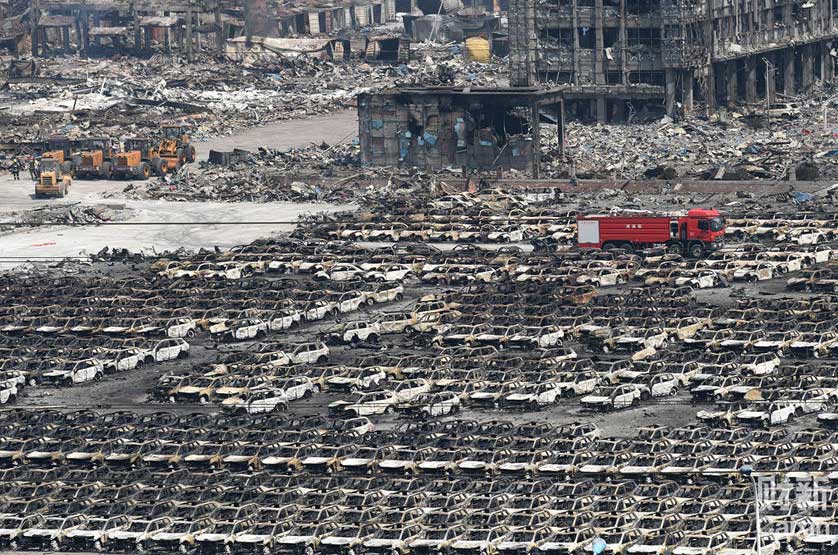 (Beijing) – At least three residential buildings stood within one kilometer from the site of the deadly explosions in the port city of Tianjin, despite a national standard requiring protective zoning for the storage of hazardous materials.

The death toll from the massive explosions at the chemicals warehouse facility in Tianjin's Binhai New Area on August 12 rose to 56, including 21 firefighters, as investigators continue to search for the cause of the fiery blasts.

The explosions occurred in a district of the city that is home to 2.5 million people. Tianjin has a population of 15 million.

The official Xinhua News Agency said over 700 people were hospitalized, with 25 in critical condition, by 9 p.m. on August 13.

Tianjin Port (Group) Co., Ltd., which administers the port area of the warehouse, said dozens of its workers remain unaccounted for.

The intensity of damage from the massive blasts prompted many to ask why the warehouse was built so close to residential buildings.

A 2011 State Council regulation on the handling of dangerous chemicals did not specify a minimum distance separating a hazardous goods warehouse from other facilities.

According to a 2001 national standard issued by the General Administration of Quality Supervision, Inspection and Quarantine, medium- and large-sized facilities storing hazardous chemicals must be at least one kilometer from public buildings, major public transportation lines including roads and rail lines, as well as manufacturing centers and mines.

A warehouse is classified as large if its size exceeds 9,000 square meters. The warehouse leveled in the blast was roughly five times the size of a large warehouse.

A local resident who was injured in the blasts told Caixin that his residential complex was located, at most, some 700 meters away from the blast site.

He said several other residential buildings near his home were all badly damaged.

A 50-year-old woman who sought refuge in a clearing at a local primary school with her son at the time of the blasts said they were too scared to stay inside.

She said that her home was wrecked by the explosion and her family is unsure whether it is safe to return.

Officials have not released any information on the exact types of chemicals and other hazardous goods stored in the warehouse.

Multiple environmental NGOs said that rain forecast to fall in Tianjin on the night of August 14 could wash toxic pollutants into the waterways.

Citing unnamed officials overseeing firefighting efforts in Tianjin, Beijing News said that sewage water samples had tested positive for the highly toxic chemical sodium cyanide. According to the U.S. Centers for Disease Control and Prevention, inhalation exposure to sodium cyanide can be fatal.

The newspaper said that some 700 tons of sodium cyanide, a chemical often used to extract gold in mining, was stored in wooden boxes and metal barrels in the warehouse.

Wen Wurui, director of the Tianjin Environmental Protection Bureau said that his agency mobilized 200 workers to monitor air quality. The teams registered 3.7 milligrams of methylbenzene per cubic meter of air at 4 a.m. on August 13.

Levels above 2.4 milligrams of methylbenzene of per cubic meter of air are considered unsafe according to national standards.

During a news conference late in the afternoon on August 13, Zhang Yong, director of Binhai New Area, said that authorities have turned 10 local schools into makeshift shelters for some 3,500 local residents.

More than 1,000 medical staff, including several severe burn specialists from 10 local hospitals had been mobilized to treat the injured and 200 government workers are on hand to counsel families, according to Zhang.

No information on the deceased has been released.