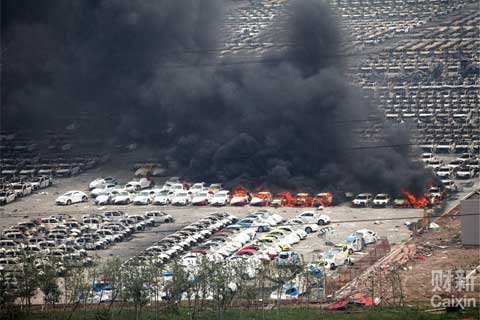 (Tianjin) – While victims of the Tianjin explosions are still waiting to be told why their loved ones died or, how safe it is to go outside, officials remained evasive in the sixth press conference regarding the disaster.

In response to a question from a Caixin reporter, Gong Jiansheng, deputy head of the Publicity Department of Tianjin's party committee said he would do his best to find out who was in charge of leading search and rescue operations, at a press conference on August 16.

By August 17, the death toll from the deadly explosion which broke out at a chemical warehouse facility in Tianjin's Binhai New Area, rose to 114 people, 54 of whom have been identified.

Another 70 people remain missing, including 56 contract firefighters from the city's port authority, according to Gong.

He said 698 people have been hospitalized, with 37 in critical condition.

Among the 54 confirmed deaths are 23 contract firefighters from the Tianjin port authority, he said.

Authorities had for days not acknowledged the participation of the contract firefighters in disaster efforts as some media outlets and online commentators raised questions over their training.

Safety education for contract firefighters might not be as stringent as that of training for firefighters in brigades under the Ministry of Public Security, said people commenting online.

Citing relatives of the firefighters, Beijing Youth Daily said that most of the contract firefighters were actually migrant workers from Yuxian County in the neighboring Hebei Province who earn less than 2,000 yuan a month.

Caixin reported earlier that the three units of contract firefighters all hired by Tianjin Port Authority, with about 25 firefighters in each unit, were among the first to rush to the site of the explosions, with some of them as young as 18-years-old on their first mission.

During a news conference on August 15, Tianjin fire chief Zhou Tian, told reporters he did not have information on casualties among the contract firefighters because he was not in charge of their operations.

Calls by some reporters to have officials from the city's port authority participate in ensuing news conferences have been ignored.

Since the first news conference on the explosion convened August 13, only a trickle of information on the disaster has been offered by authorities with scant disclosure on the exact types of chemicals housed or detected at the site.

The four officials presiding over the fifth press conference on August 15 remained silent when quizzed by reporters on why a warehouse storing hazardous chemicals could be situated so close to residential buildings.

At least three residential developments were built within one kilometer from the site of the explosions despite government regulations on protective zoning for the storage of hazardous materials.

He Shushan, a vice Tianjin mayor in charge of industrial safety and fire prevention, triggered media outrage in his absence at press conferences until his attendance at one on August 17.

Reporters and some observers were also angered by state-owned broadcaster China Central Television and local Tianjin TV when each live broadcast was cut off for each of the press conference as soon as the session moved to the questions and answers format.

"In an age of information technology and social media, such actions fail to contain discussion and instead, fuel public distrust," wrote Wei Yaoben, an analyst with a media watch unit of People's Daily.

In the first visit by a top-ranking official to the site, Premier Li Keqiang warned official media outlets on August 16 that inaccurate reporting would give rise to rumors.

Tianjin vice mayor He Shushan said most of the highly toxic chemical sodium cyanide is located in an area of some 100,000 square meters, or roughly 13 soccer pitches.

As rain is forecast to fall in Tianjin in the next three days, environmental protection authorities are rushing to erect barriers to contain the toxic chemicals, though it remains unclear how much has leaked.

Shi Luze, chief of staff of the Beijing Military Area Command on August 16 confirmed media reports that hundreds of tons of sodium cyanide were stored in the warehouse along with many dangerous chemicals and materials.

He said rescuers were using hydrogen peroxide to neutralize the toxins.