How a Beijing Traffic Cop Lined His Pockets 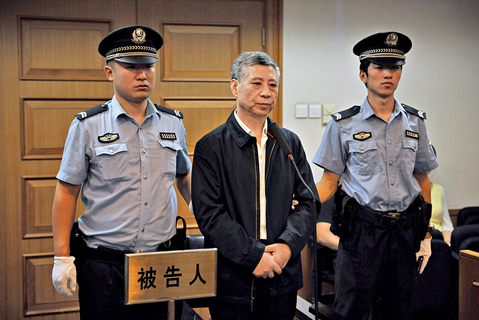 (Beijing) – Manipulating car licensing rules and brokering shady art deals were among the charges leveled against a former traffic director for the Beijing police department who's now serving life in prison.

The Beijing No. 1 Intermediate Court convicted and sentenced Song Jianguo, a 61-year-old veteran of the capital's police force, in November on numerous counts including accepting nearly 24 million yuan in bribes. Song has appealed.

In a related case, the court in November sentenced Song's son, Song Zhe, to 20 years in prison for taking bribes worth 12 million yuan in connection with his father's illegal activities. The son has also appealed.

The elder Song started as a bottom-rung police officer and worked his way up the career ladder. In 1995, he was appointed director of the Tongzhou District Public Security Bureau, in eastern Beijing. He rose another notch in 2006 with a promotion to head the police department's Traffic Management Bureau, which supervises Beijing's motor vehicle traffic and public transportation systems.

Reports that Song may have used his position for personal profit emerged in December 2012, when a state-backed news journal reported that Communist Party investigators were looking into whether he had manipulated Beijing's vehicle license lottery system. The system is designed to control the number of cars on roads by distributing license plates only to winners of a special lottery.

Police officials responded to the report by denying that investigators were targeting Song. But a few weeks later, Song was removed from his traffic management post.

Yet something was amiss. The party's anti-graft watchdog opened an investigation into Song's activities in May 2014. And he was formally named as an investigation target by the police force's corruption buster on May 27

In an October 2014 letter to police investigators, Song admitted coming "face to face with temptations" that led him to accept bribes and "make the wrong kinds of friends."

Song's letter may have vastly understated the depth of his illegal activities. In its conviction statement, the court said that Song had accepted payoffs from taxi services, art dealers, a property developer and other favor-seekers for at least eight years.

Between the day Song pocketed his first bribe in 2004 and June 2012, the court said, individuals and companies slipped him a combined 8.6 million yuan.

Song used his position at the Traffic Management Bureau, which oversees the license plate issuance, to secure special "Jing A" plates to individuals and companies. These plates are intended for certain high-level government and party-owned vehicles, and give their owners special driving privileges such as for parking in no-parking zones.

For a price, investigators said, Song helped Jing A license applicants get what they wanted without working through the formal application process. Some months, they said, Song helped dozens of drivers get the plates.

A traffic bureau employee who asked not to be named said Song was frequently asked to help individuals and companies who wanted Jing A plates. Those who received them included the controversial property tycoon Guo Wengui, founder of Beijing Pangu Investment Co. and Beijing Zenith Holdings Co. Media reports have linked Guo, who is living in Hong Kong, to several corruption scandals.

The court said Song helped Guo and his companies get several Jiang A plates for their cars. He also helped Guo win an approval from urban planning officials for huge outdoor advertising LED screens at Pangu Plaza, a luxury hotel on Beijing's north side built for the 2008 Summer Olympics.

In 2008, urban planning authorities ordered Pangu officials to remove the screens, arguing they distracted drivers on nearby highways and had been installed by the developer without necessary permits. But that decision was later overturned by Song's traffic bureau, and today the screens are still in use.

A traffic bureau official testified in court that Song had intervened on Guo's behalf, paving the way for the Pangu screens. And in written testimony, Guo told the court that Song was a frequent guest at Pangu Plaza restaurants. He also said that he and Song held at least 15 meetings between 2008 and 2011.

Song told investigators that he and the Liu brothers had been close associates since 2003. "I see them as little buddies," he said.

In 2007, though, the relationship changed. That was the year that the older brother started giving gold bars and cash gifts to Song, according to Liu Changjiang's testimony at Song's trial. For a few years, the gifts totaled around 100,000 yuan annually. But the pocket-lining jumped to 200,000 a year in 2011 and 2012.

The bribery doubled in part because Song helped United Crescent win a business permit allowing it to open a driving school in 2011. Moreover, according to court documents, United Crescent received two Jing A car license plates through Song.

In pursuit of personal gain, Song sometimes ventured beyond the world of traffic management. The court said Song earned more than 15 million yuan by introducing businessmen who wanted to buy fine art to an art dealer named Sun Shiping.

Sun owns Beijing Rongde Gallery and is a major dealer in paintings by the artist Huang Yongyu.

Zhao, the lawyer, said Sun paid Song commission fees for helping cut deals between 2009 and April 2014, adding that his client's interest in helping to sell paintings had nothing to do with bribery.

But testimony at Song's trial painted a different picture. Sun testified Song was an art fan who frequently visited his gallery starting in the 1990s. The two became friends, and in 2006 Song helped Sun and Sun's friends obtain nine car license plates.

In April 2009, Song offered to help Sun find businessmen who were interested in owning or investing in paintings. Some of these businessmen happened to be people who owed Song favors.

Court documents say that United Crescent's Liu Changqing bought more than 100 paintings from Sun between 2009 and April 2014. Liu paid a combined 90 million yuan for the paintings, the court said. And Sun paid Song 11.5 million yuan for facilitating the transactions.

Song had recommended Liu buy the paintings, the taxi executive testified. Liu said he "was hesitant to refuse" the recommendations, because he knew that if he bought the paintings "Song would be happy."

Sun testified that, over the years, he had offered a total 15.3 million yuan to Song for painting deals. Sun held the earnings in one of his bank accounts, which Song was then allowed to use for personal spending.

A Sun bank account held 7 million yuan of Song's money as of 2014, when the traffic official was detained, said to the court.

In April 2014, Sun testified that he was asked by Song to keep all art sales records out of investigators' hands. He also gave Sun two safes containing "all of his wealth." Sun later gave the safes to investigators.

Song was also charged with accepting a payoff in the form of two apartments from Zhai Yutang, a property developer. And he was gifted a luxury watch by Tan Feng, a cigarette dealer.

"Song helped my family get residency registration documents and car license plates without any questions," said Tan. "I gave him the watch to repay" the favor.