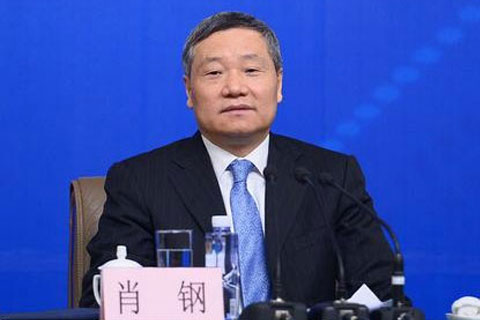 (Beijing) – The securities regulator says a report about its chairman resigning is wrong and it has demanded the media outlet correct it.

The China Securities Regulatory Commission (CSRC) said on January 18 on its social media account that a "Reuters report about our chairman, Xiao Gang, tendering his resignation does not accord with the facts."

"We have contacted Reuters and demanded they make a correction," the regulator said on Weibo, China's version of Twitter.

It posted the message shortly after the news outlet reported that Xiao had offered to resign. Reuters cited an unnamed source with ties to the leadership as saying that Communist Party decision-makers are "extremely unhappy" with Xiao. The article also cited another unnamed source in the financial industry.

The report said Xiao, 57, submitted his resignation last week after a "circuit breaker" mechanism he advocated to control stock market fluctuations was scrapped four days after its introduction amid criticism it exacerbated sharp sell-offs.

A person close to the regulator said the chairman was unlikely to resign now because a team from the party's graft watchdog that started examining CSRC officials last year as part of a campaign to fight corruption has not completed it work.

"The timing is inappropriate for the CSRC chairman to resign even if he offered to," he said.

The resignation of any ministry-level official such as Xiao must be approved by the Organization Department, the party's human resources department.

CCTVs 7 p.m. news program on January 18 included a video of Xiao at a seminar for high-level cadres that was apparently taken the same day.