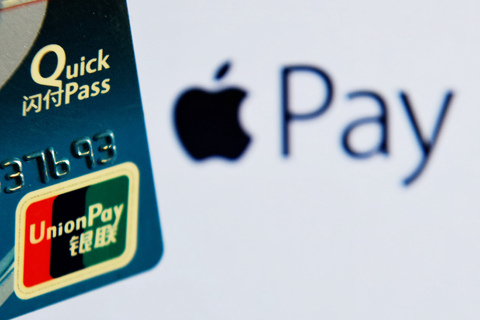 (Beijing) – Smartphone users trying to sign up for Apple Inc. mobile payment service ran into problems on the first day it was available in China.

However, many users had trouble getting started.

"It kept telling me the phone 'cannot connect to Apple Pay' or the verification for the card is not available when I was linking a bankcard," said Duan Ge, a 31-year-old employee of a film production company.

Duan said he managed to link his debit card after about 30 minutes of trying, but later when he tried to register another credit card, he "could not even open the app."

Apple Pay entered the country through a partnership with UnionPay, Apple said in December, in a bid to challenge the dominance of Alibaba Group Holding Ltd. and Tencent Holdings Ltd.

Some mobile payment experts argue that Apple Pay is a safer payment option than an Internet-based system because it uses near-field communication (NFC), a short-range wireless technology that lets Apple devices and banks exchange data. It is more difficult for hackers to abuse NFC technology, the experts say.

Only about 60 percent of POS terminals have near-field communication technology, Dong Junfeng, a vice manager of Bank of China's Internet finance department, wrote in a commentary published by Caixin.

"Not every business has the incentive to use Apple Pay, unless it can win support from businesses by subsidizing them, like Alipay does," he said.

Apple Pay is limited to users who have the iPhone 6 or 6s.

Nteen major banks, including the nation's biggest lender, Industrial and Commercial Bank of China, have agreed to let customers link their bankcards to Apple Pay, the company said.