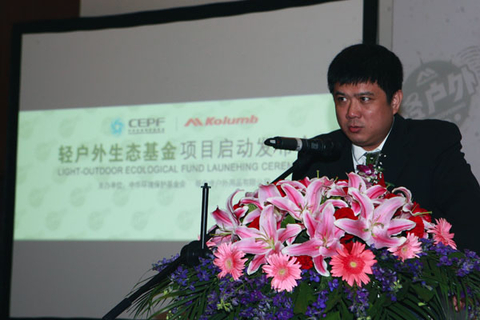 (Beijing) – Police confiscated company seals of a debt-riddled sports apparel maker that had failed to pay its employees for over three months, the company said.

Kolumb Outdoor Equipment Co. Ltd. in Fuzhou, in the eastern province of Fujian, said in a statement on May 23 that police took the chops that belong to the company and its subsidiary that are necessary to authorize all business dealings.

A dozen workers gathered outside the company's factory on the same day demanding withheld salaries, the National Business Daily, a news outlet in Shanghai, reported.

A notice on the factory gate posted by the local government said the company owed three months of back pay, the paper said.

"The company only paid once this year," an employee told the newspaper. "It hasn't given a penny since the Spring Festival." Production stopped for the popular holiday, also known as the Chinese New Year, and workers have not received their wages once manufacturing resumed.

There were other signs of trouble at the company listed in the New Third Board, a national market for the exchange of shares in non-publicly traded companies. Wei Qinghua, chairman and general manager of Kolumb, who owns nearly 43 percent of the company's shares, resigned citing health reasons earlier this month, the firm said on May 17. But he continued to serve in the board of directors.

Wei had used all his shares as collateral to borrow money from a private asset management firm in February, the company's filings to the stock exchange on February 19 said.

Guotai Junan Securities Co. Ltd., the company's broker, said the money was for "personal use," and if he fails to pay back the interest and the capital by August 26, "there is a risk that Kolumb's controlling shareholders might change."

Kolumb, which was listed in December, suspended the trading of its shares on May 5 after it missed a deadline to release its annual report, the company said. The exchange will remove the stock from its board if the report is not submitted by June 30, the broker said.

Following Wei's resignation, Guotai Junan issued a warning notice to investors on May 19. The broker said it had tried to contact Wei, "but failed to get hold of him to confirm" his decision to step down.

Several employees of Kolumb told the Shanghai newspaper that "Wei is missing and the company has stopped production."

In recent months, there were several incidents where top executives of companies were untraceable for days. The country's largest private sector conglomerate, Fosun Group, said it was unable to contact its chairman, Guo Guangchang, on December 10. Guo reappeared in public four days later, and the company said he had been assisting prosecutors in Shanghai with a corruption inquiry.

The apparel chain Shanghai Metersbonwe Fashion & Accessories Co. Ltd. said it did not know the whereabouts of its chairman, Zhou Chengjian, for a week in January. His company did not give any explanation for this absence.