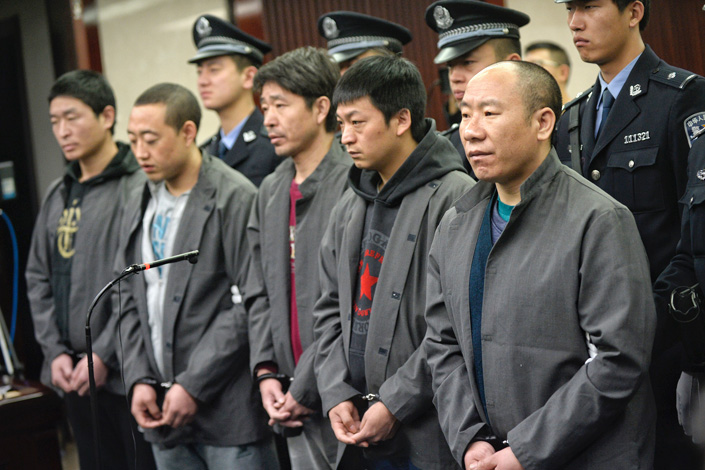 The trial began Monday in the Beijing Third Intermediate Court of five suspects accused of killing a construction co-worker and subsequently trying to get compensation from the victim's employer. Photo: Visual China

(Beijing) — Five men on trial in Beijing are accused of killing a co-worker at a construction site in a scheme to extort compensation from the victim's employer.

The men, whom the court identified only by their surnames, were charged with intentional homicide of a 32-year-old man named Chen Yuanping in 2014. The trial, which began Monday in the capital's Third Intermediate Court, was set to continue Tuesday.

Chen and two of the suspects, Ma and Ji, had been working on the 13th floor of a high-rise building in August 2014 when Ma and Ji allegedly attacked Chen with a metal pipe and then threw him off the building onto a platform on the second floor, killing him instantly. Ma then allegedly called their employer to say that a relative of Ji, who was an undocumented person with no hukou, had died in an accident.

An investigation later revealed that a group that included Ma and Ji had allegedly plotted to use Chen's corpse to stage Ji's relative's death, after which accomplices pretending to be the dead man's family would have claimed compensation.

Similar cases of murder are frequent in illicit coal mines across China, where organized groups have killed fellow workers and used the corpses to claim mine accidents had occurred. The groups would then extort large sums in compensation from mine owners by posing as the victims' relatives.

Ma and Ji, as well as two out of the other three accused men, are from the same village in southwest China's Sichuan province. Chen was a native of neighboring Shaanxi province who had left his hometown in his 20s and had worked odd jobs for years before his death.

Days after the incident, a group claiming to be the deceased man's family in Sichuan, including a woman who said she was the victim's wife, approached the construction company and asked for 1.6 million yuan ($231,500) in compensation. The company was willing to pay only 550,000 yuan. After nearly a week of haggling, the "family" lowered its price to 600,000 yuan, raising suspicions among company representatives.

Their behavior was also at odds with a grieving family. "When the man's alleged 'family' saw his body, their expressions were indifferent, and his 'wife' didn't even cry," a site safety manager, a trial witness, told The Beijing News. "It felt different from other compensation cases that I had handled before." The fake family also insisted that the corpse be cremated as soon as possible.

All these factors increased the initial doubts of company officials, who halted negotiations and alerted police. The five suspects were subsequently arrested.

The construction company that had hired Chen was quick to contact law enforcement officials. But criminals involved in other murder-for-compensation plots in the past have often taken advantage of companies without government licenses that would rather pay large compensation sums than risk police involvement.

In June, police in Inner Mongolia arrested 74 suspects linked to the deaths of at least 17 workers at unlicensed coal mines in the region. The miners had been killed by an organized gang who then demanded compensation from their employers while pretending to be relatives of the dead miners and threatening to report the unlicensed mines to authorities.

In 2010, the Beijing First Intermediate Court heard a similar case involving a woman who married a man only to kill him at an illegal coal mine near the city. The woman had been persuaded by a local crime ring to commit the crime, mask it as an accident, and then blackmail the illegal mine operator into paying compensation.

The ringleader, a textile factory owner named Huang Yucai, was later found to have masterminded two other murder-for-compensation plots.

Lack of government oversight on the coal mining industry has bred an entire underworld of unlicensed pits across China, where crimes like Huang's could easily happen, a defense lawyer involved in the 2010 case said.

NB. The original version of this story misstated the identity of the man whose death was faked by Ma and Ji.