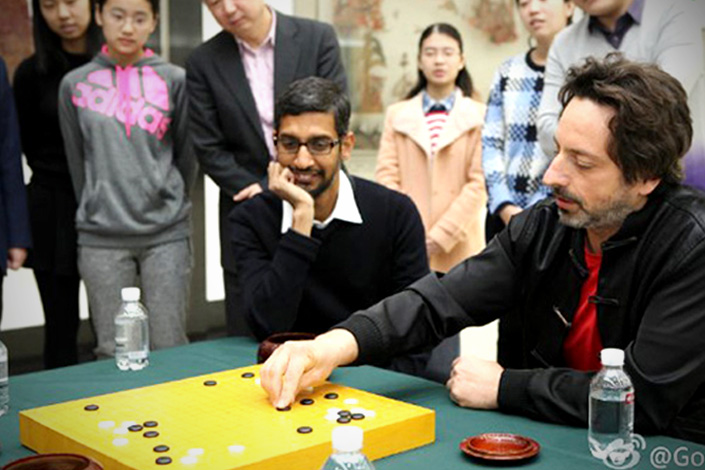 (Beijing) — Google CEO Sundar Pichai made his second visit to China in 2016 this week, extending a flurry of activity as he seeks to reset the internet giant's relationship with Beijing after a stormy falling-out more than six years ago.

Pichai and Google co-founder Sergey Brin visited a school famous for training players in the ancient board game of Go. Born in Russia in what was then part of the Soviet Union, Brin has been a critic of China in the past for its censorship policies that require internet companies to police themselves and remove content on politically sensitive topics.

Such sensitivities led to Google's decision to close its Chinese mainland-based search engine in 2010, four years after entering the market, following a face-off with Beijing over the censorship issue. Google has maintained a China-based page at Google.cn since then, which directs users to its main Chinese-language search page in Hong Kong, where media laws are less restrictive.

Google began raising its profile in China earlier this year when its AlphaGo computer defeated South Korean champion Lee Sedol 4-1 in a five-game match of the ancient game. Much of China was mesmerized by the event, with heavy coverage in state-controlled domestic media.

Shortly after that match, Pichai made his inaugural trip to China as Google's CEO in April, less than a year after being named the company's chief executive. Shortly after Pichai's appointment, outgoing CEO and Google co-founder Larry Page, who was a major decision maker during the 2010 standoff, said he was handing over the China issue to Pichai.

Pichai's latest visit came just a week after Google held a developer forum in Beijing, resuming the meeting after a five-year absence. At the event, Google unveiled a new China-based page for local application developers, marking one of its first launches of a new web page in the country since 2010.

Google held another event in July in the southern city of Shenzhen to launch an experience center, and in April held another event for entrepreneurs. The company has also registered a company in China's free trade zone in Shanghai.

China still maintains the same self-censorship policies that existed on the internet in 2010 when Google left. But a big change since then has been the rapid rise of the mobile internet and smartphones, the large majority of which use Google's Android operating system.

Most Chinese smartphone brands like Huawei and Xiaomi, as well as global giants like Samsung, produce phones primarily using Android and offer apps over their own online stores. But Google's own smartphones are absent in China, and its Google Play app store is blocked.

Google hasn't commented on its China intentions in the market, but notes that it never left and has maintained a presence there through offices that offer its services based outside the country.