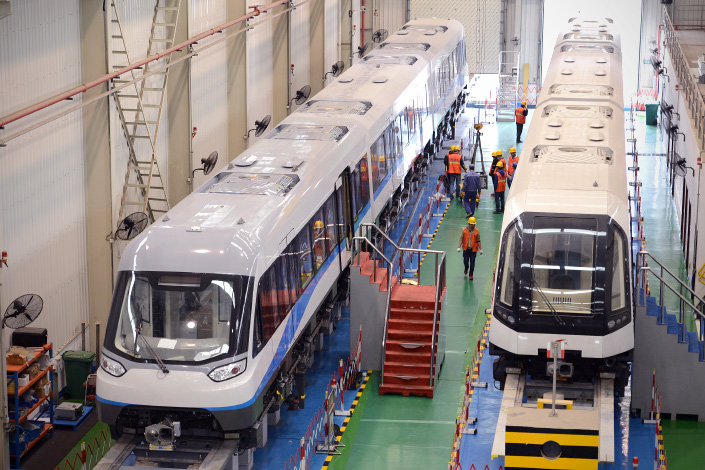 (Beijing) — China’s top train maker has punished a subsidiary for creating disorder in the international marketplace through practices such as bidding for projects at money-losing prices and breaking promises.

In a recent internal memo, CRRC Co. Ltd. said the offending unit, CRRC Zhuzhou Locomotive Co. Ltd., engaged in bidding behavior that led to losses and damaged the group’s reputation. It pointed to five past cases since 2015 involving inappropriate behavior by the affiliate.

The Zhuzhou firm is China’s largest electric-motor train manufacturer, producing 60% of the country’s carriages. It has expanded aggressively overseas, recently scoring its first deal in the European Union, as Beijing pushes the sector to export its technology after building a huge national high-speed network over the last decade.

One of the five cases of misconduct involved a deal to supply 135 subway trains to the Pakistani city of Lahore, when Zhuzhou set the bidding price lower than CRRC’s standard, a company source told Caixin, speaking on condition of anonymity.

In another instance of misconduct, the Zhuzhou affiliate was part of a consortium collectively bidding to build a coach factory in Kanchrapara, India, but then approached local companies by itself, the parent company found. That resulted in a lawsuit filed by local companies, another source at CRRC told Caixin.

CRRC also found another case of misconduct where Zhuzhou bid for a deal to supply 69 metro trains in the Indian city of Nagpur by promising to establish factories and create jobs. But then the company broke its promise when the local government offered to sign a preliminary deal, resulting in “discontentment from the local authority,” the source said.

The punishments were relatively lenient and should have been stronger to have a bigger deterrent effect, said Zhao Jian, a professor at the School of Economics and Management at Beijing Jiaotong University.

The disorderly market behavior is a legacy of a period of intense competition when China had two main train manufacturers, which were merged only in June 2015. Even after the merger, such behavior still frequently occurs among the current company’s affiliates, a person close to CRRC told Caixin.