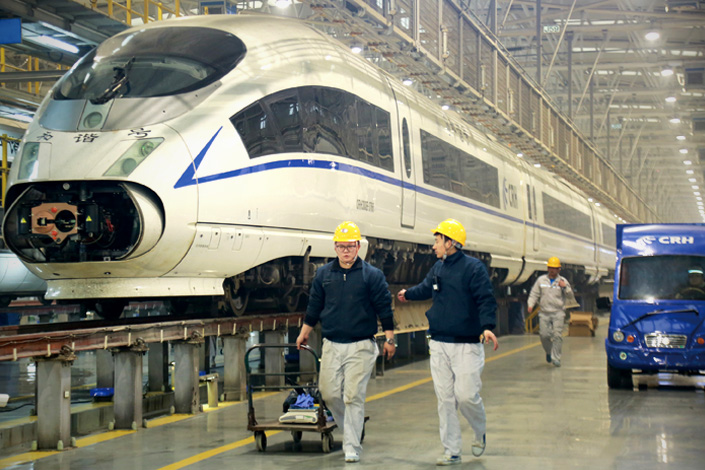 Engineers work on a bullet train in a railway maintenance and repair factory at the Xi'an Railway Administration on Tuesday. Photo: IC

(Beijing) — China has sold three high-speed rail trains to the Czech Republic, Beijing's first such deal with a European Union member as it tries to export the technology after a multibillion-dollar building spree at home.

A subsidiary of China's top train maker, CRRC Corp. Ltd., agreed on Monday to supply three trains to Czech rail operator Leo Express in transactions totaling more than 20 million euros ($20.8 million). The deal could be expanded to up to 30 trains in three years, said Liao Hongtao, vice general manager of the CRRC affiliate.

The trains can operate at a speed of 160 kph and will be compatible with railways in the Czech Republic, Slovakia and Poland, Liao told the state-owned Xinhua News Agency.

The deal marks a milestone as China tries to export a technology in which it is rapidly becoming a world leader. After a decade of development, the country now boasts a 20,000-km high-speed rail network built with 800 billion yuan ($115 billion) in annual spending over the past few years.

But foreign countries have been slow to try out the technology although China often offers financial assistance for countries willing to buy.

A Chinese group won contracts a year ago to construct and revamp the 350-km rail link between Serbia and EU member Hungary, marking the country's first step in the European bloc.

American railway developer XpressWest partnered with a Chinese group to build a 298-km, $12.5 billion high-speed line linking Los Angeles and Las Vegas in the western U.S., but that deal collapsed in June after the Chinese consortium failed to get the necessary government approvals.

Mexico also hired a Chinese group for a similar high-speed rail project in 2014, but that deal was also derailed after rivals complained of discrepancies in the bidding process.

In one of the industry's few overseas successes, China beat Japan last year in bidding to build a high-speed railway between the Indonesian capital of Jakarta and the country's third-largest city, Bandung.