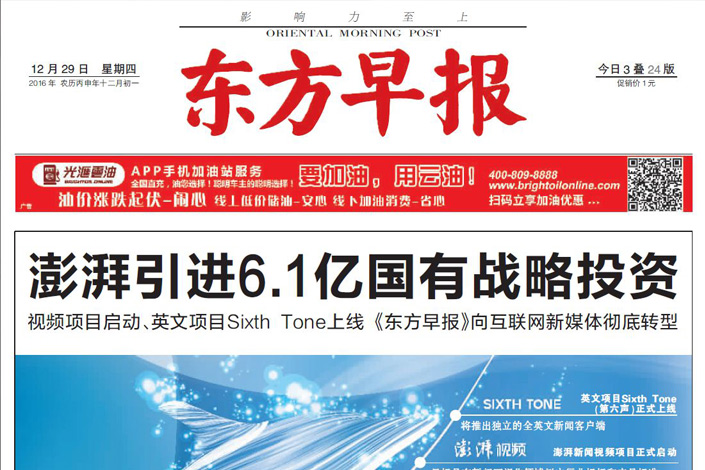 The front page of Thursday's Oriental Morning Post trumpets the news that the Shanghai-based newspaper will be transformed into internet-based "new media." Photo: Caixin

(Beijing) — One of Shanghai’s top newspapers will cease publication at the end of the year, joining a wave of state-owned traditional Chinese media trying to transform themselves into web-based news providers to compete with a growing field of private-sector rivals.

As part of its transformation, the parent of Oriental Morning Post announced on Wednesday it has also raised 610 million yuan ($87.7 million) from six new investors, who will get 17.8% of a company whose main asset is now its 2-year-old new-media platform The Paper, or Pengpai.

Traditional media in China, including newspapers, TV and radio stations, once were all state-owned and considered propaganda tools for promoting the central government’s agenda. But beginning in the 1990s, most were ordered to become more commercial and earn their own way while still reserving space for the government’s agenda.

The Oriental Morning Post was one of a new generation of more-commercially focused newspapers, founded in 2003 by one of Shanghai’s oldest newspaper groups. It was once one of Shanghai’s most popular newspapers, but has suffered rapidly declining readership and advertising revenue due to intense competition from newer, privately owned online rivals like news portal Sina.com.

In a nod to that decline, the newspaper’s owner has been channeling many of its resources into The Paper over the past two years, moving over many staff from the older Oriental Morning Post.

All six new investors in the parent company are state-owned, Shanghai-based entities, including a traditional retailer, a hotel operator and a trading company. The addition of such investors is relatively uncommon for traditional Chinese media, which were usually owned by local propaganda ministries and other government agencies.

At the same time, Shanghai has been quite careful in its selection of the six new investors, only allowing premier, financially strong names with the correct political backgrounds, said Dou Fengchang, a journalism professor at the Fudan University School of Journalism in Shanghai.

“Since The Paper is government owned and charged with protecting mainstream ideology, it can only accept ‘safe’ outside money,” Dou said. “In this instance, the Shanghai city government has chosen six companies with ‘red roots with upright shoots’ to invest, which is an obvious reflection of this ideological mission.”