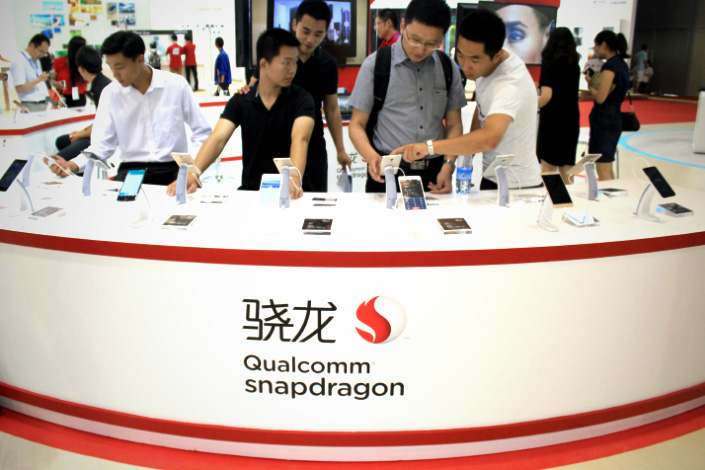 Visitors try out smartphones equipped with Qualcomm Snapdragon CPUs during an exhibition in Nanjing, Jiangsu province on July 3, 2015. Photo:IC

(Beijing) — Leading telecom chip maker Qualcomm Inc. said it has settled its patent infringement case against Chinese smartphone maker Meizu Technology Co. Ltd., bringing an end to a difficult period in China for the American global giant after it was slapped with a record fine for anti-competitive behavior.

One of China’s anti-trust regulators, the National Development and Reform Commission, ordered Qualcomm two years ago to pay a 6 billion yuan penalty, equivalent to $975 million at that time, after finding the world’s biggest smartphone chip maker engaged in aggressive and restrictive practices for users of its technology. Those included slipping in expired patents into its licensing package so it could charge extra fees, and inserting rigid terms into contracts to prevent competition. As part of a settlement in that case, Qualcomm was forced to sign new licensing deals with the dozens of companies that use its chips in China.

While it has signed deals with most of those, one major holdout was Meizu, which is backed by e-commerce giant Alibaba Group Holding Ltd. The clash led Qualcomm to sue Meizu for patent infringement last year in several countries, including the U.S. and also in Meizu’s home China market.

Announcement of the new settlement just before New Year’s Day comes half a year after Qualcomm first sued Meizu. Under their new agreement, Meizu will get worldwide rights to sell products with Qualcomm chips and other 3G and 4G technology, the two sides said in their joint statement.

“Today, we are focusing on our vision with better clarity, and striving to become the top designer brand for high-tech products,” Meizu President Bai Yongxiang said in a statement. “For this goal, we are determined to remove all obstacles, focus on products and focus on the future.”

Meizu is one of China’s leading smartphone makers, but like many of its peers it has been looking to expand abroad to escape cutthroat competition at home. The company now sells its smartphones in about 10 export markets, from India and Vietnam in Asia to Italy and Spain in Europe. But exports are still relatively small, accounting for about 10% of Meizu’s total sales.

Patent holders like Qualcomm have seized on this overseas migration to file infringement lawsuits, especially in more-mature and lucrative Western markets. That effectively forces the Chinese brands to either sign licensing agreements or withdraw from those markets.

Since settling its antitrust case with Beijing, Qualcomm has also come under investigation for similar anti-competitive practices in a number of other markets, including South Korea, the U.S., Europe and Taiwan.