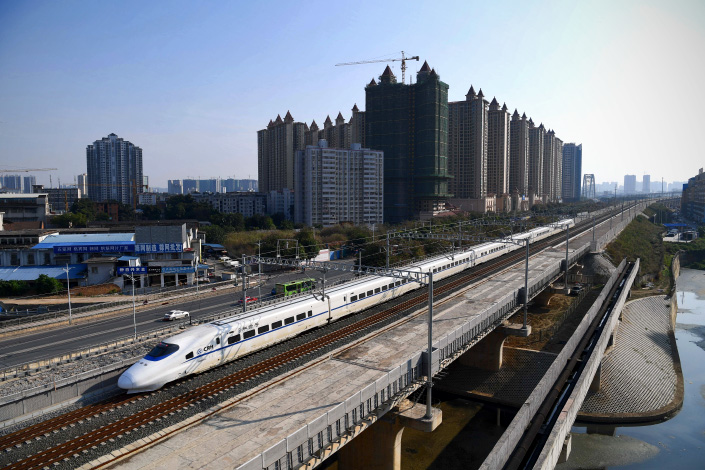 (Beijing) — China’s railway operator may have put the brakes on its railway investment last year, but the country still plans to invest at least 800 billion yuan ($115 billion) in the sector in 2017 to boost economic growth, the head of the operator said Tuesday.

After years of breakneck growth, China’s railway investment reached a record high in 2010 of 840 billion yuan, but dropped in the next few years following the arrest of several high-level corrupt officials and a train collision in Wenzhou, Zhejiang province, that killed 40 people. As the country turned to infrastructure investments to bolster economic growth, the annual railway investment started to climb back to the 800 billion yuan benchmark in 2014 and has stayed there ever since.

While investment shrunk slightly last year to 801.5 billion yuan in 2016, the company plans to spend about 800 billion yuan in 2017, the same goal it has had for the past three years, said Lu Dongfu, general manager of the China Railway Corp. (CRC).

The CRC’s railway investment consists of building railway infrastructure and purchasing trains and equipment. The decline in railway investment last year was mainly caused by a reduction in the purchase and upkeep of trains, said a person close to the CRC, without elaborating on what prompted the cuts.

Yang Yudong, vice minister of transportation, said in December that China planned to spend 3.5 trillion yuan in the railway sector as part of the country’s 13th Five-Year Plan, which charts development goals for 2016-20. Under the plan, the government will build 30,000 km of new track over the five years, which will expand the country’s railway network to a total of 150,000 km.

However, the ambitious plan has run into criticism.

Zhao Jian, a professor at the School of Economics and Management at Beijing Jiaotong University, earlier faulted the plan to build a 247 billion yuan intercity railway network linking Beijing, Tianjin and the municipalities’ surrounding Hebei province by 2020. He said it would be a waste of money as the rail network density in the region has already surpassed those in the Yangtze River and the Pearl River Deltas.

Other experts also expressed concern that the country’s 22,000-km high-speed railway system is a burden for the government. The high-speed rail linking Beijing and Shanghai became the only profitable line in 2015, four years after it began operating, thanks to enormous passenger volume. But most of China's bullet trains running through less-populated regions — especially those in western China — are still losing money.

In a response to those doubts, Yang said that building rail links is not about making profits.

“Whether it is high-speed rail or normal trains, these are all-important infrastructure projects,” which means they will require a long payback period, Yang said. He added that he is confident that the high-speed rail projects in the country’s hinterland will eventually turn a profit.