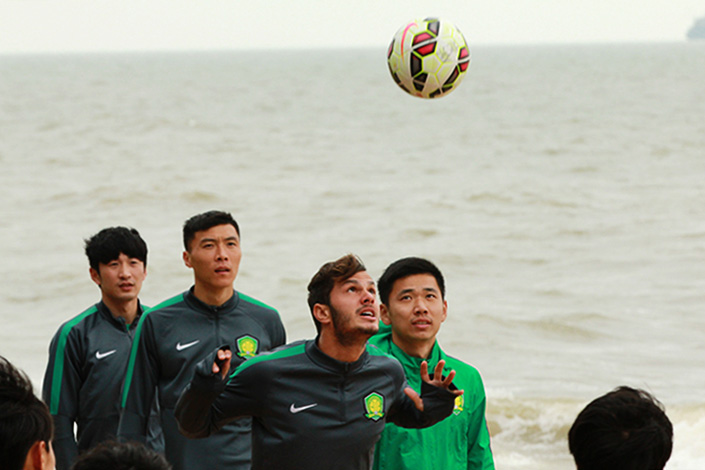 Brazilian soccer player Kleber Laube Pinheiro,who plays for Beijing Guo'an Club, practices on a beach in Haikou, Hainan province on Jan. 12, 2016. The General Sports Administration said recently that the spending on bringing global sports talent to China has become “irrational,” and the practice needs to be controlled. Photo: IC

The call by the General Administration of Sport of China, appearing in an interview format and published on its website Thursday, followed a string of high-profile and progressively pricey overseas deals over the past two years.

It also came in the wake of a recent report in People’s Daily, the official newspaper of the Communist Party, that said sports investing was in a “bubble” mode.

Most of China’s sports investors have focused on overseas and domestic soccer.

In the interview, an unnamed sport administration spokesman responded to a reporter’s question by declaring that “on the whole, the face of soccer in China looks good.”

“But in the face of a steady rise and rapid development," the spokesman continued, "some problems have also emerged attracting the attention of society. These include major foreign acquisitions, and clubs burning through money to buy foreign players with big salaries.”

The administration's official view comes in the wake of a major buying binge of foreign soccer clubs by Chinese investors, as well as the recent signing of expensive foreign players by Chinese teams.

Chinese individuals and companies have invested about $2 billion in 15 European soccer clubs over the past two years. Targets have included West Bromwich Albion, which recently became the first English Premier League soccer club to be purchased by a Chinese buyer, as well as stakes in Italy's Inter Milan, Spain’s Atletico de Madrid, and Britain’s Aston Villa and Manchester City clubs.

The administration’s remarks also come a week after media outlets reported that Argentine soccer star Carlos Tevez would move to the mainland to play for the Chinese Super League’s Shanghai Shenhua. Unnamed sources were quoted as saying that the player's two-year contract was worth $40 million.

“As part of the adjustment, high-cost signings must be controlled," according to the administration. "And excessively high salaries should be limited in a reasonable way.”