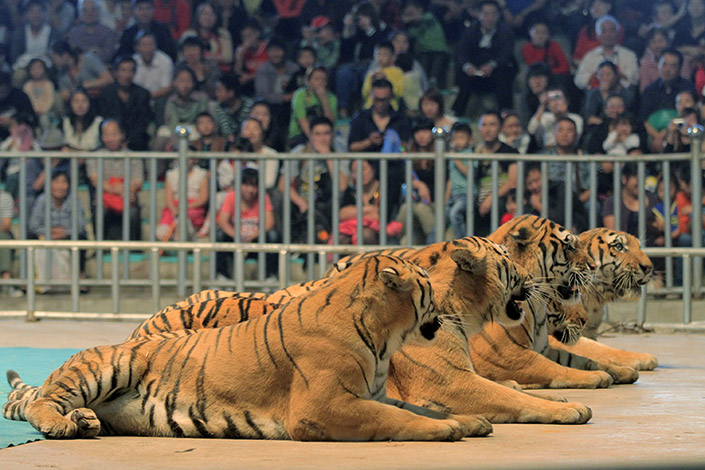 Trained tigers perform on World Animal Day in the Nanjing Pearl Spring Wildlife Park in October 2012. Two owners of a circus troupe were each sentenced in Shenyang to 10 years in prison recently for transporting endangered species. Photo: Visual China

(Beijing) — Two circus-troupe owners have been imprisoned by a Shenyang court for up to 10 years for illegally transporting several animals considered “protected species” — a ruling that critics say is too harsh because the court has handed down the same punishment to poachers.

Li Rongqing and his cousin Li Ruisheng, who owned the troupe based in the northern city of Cangzhou, were sentenced to eight years and 10 years respectively for ferrying animals for performances in Hebei and Liaoning provinces from May to July without a transport license.

They had borrowed three lions from another two groups, but lacked the transportation permits since the animals are considered endangered as China is a signatory to the Convention on International Trade in Endangered Species of Wild Fauna and Flora (CITES).

They had also transported a tiger, classified as a “Class One Protected Species” in the national List of Wildlife Under Special State Protection, court documents showed.

One black bear and one macaque, classified as “Class Two Protected Species” under the national list, were also taken for performances without proper documents, according to the Huinan District People's Court in Shenyang.

A license from the provincial or regional level forestry authorities is required to transport animals classified as Class One or Class Two under Chinese law, according to Song Yang, the defendants' lawyer.

But circus troupe owners often flout such rules as applications are too time-consuming and troupes need to frequently ferry performing animals from one location to another, Song told the Beijing News.

His clients had obtained a transportation license in 2015, but it had expired late last year, according to the lawyer.

Song argued that the pair had violated the law, but they should be punished under the civil code, not the criminal law.

The criminal code is meant to protect endangered species from illicit trading or poaching, but the circus troupe had only transported the animals for performances.

The troupe has a business license, and the two troupes that had loaned the animals to the pair have licenses to own, breed and train the animals, he said.

The sentencing is too harsh because the court failed to differentiate between circus troupe owners that violate transportation license requirements and poachers without licenses who move endangered species in order to sell them illegally, said professor Xu Lanting from the Chinese University of Political Science and Law.