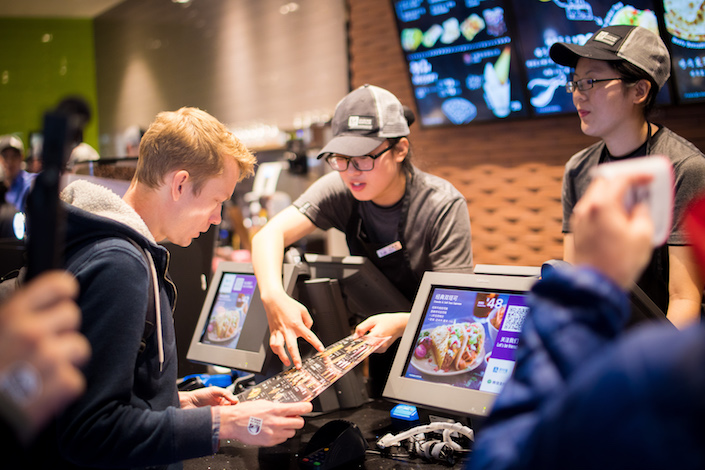 (Beijing) — Fast-food operator Yum Brands is ringing in the New Year with the rollout of its Taco Bell Mexican fast-food chain in China — the first major move by Yum’s newly independent Chinese unit trying to revive its fortunes with more local flavors.

Yum China, whose other brands include KFC and Pizza Hut, formally launched its Taco Bell in Shanghai’s main financial district on Monday as part of a major global expansion of the U.S. chain. It is planning to expand to other Chinese cities in the future in line with demand, a spokesman said.

The chain had been testing out a number of items tailored for Chinese tastes during a soft-opening period over the last few weeks. Yum won kudos for such an approach back in the 1980s and 1990s, when it was one of the first major global chains to develop special items for Chinese diners at its local KFC and Pizza Hut restaurants.

“Leveraging our deep insights into Chinese consumer preferences, developed from close to 30 years operating in this market, we thoroughly researched and fine-tuned the Taco Bell menu for China, and the initial response from customers is very encouraging,” said Yum China CEO Micky Pant.

Items specific to Taco Bell’s China menu include a shrimp and avocado burrito. Customers can also order a range of larger shared-style plates, catering to a local preference for buying larger platters that groups of people can eat together.

The Shanghai opening marks Yum’s second attempt to build a China following for Taco Bell. The company previously opened several Taco Bell restaurants in Shanghai, featuring a table-service format that was different from the traditional fast-food counter service in its core U.S. market. But those stores failed to generate much buzz, and Yum quietly shuttered them in 2008.

By comparison, the new stores are flashier and have more high-tech features, including order kiosks and an open-style kitchen that lets customers watch food being made through glass windows. The trend is part of a larger movement by Yum and U.S. rival McDonald’s Corp., which are trying to update their stores with such features to revive their stagnating China fortunes.

The two were once considering cutting edge on the Chinese dining scene when Yum opened its first KFC in Beijing in 1987, and McDonald’s followed several years later. But competition from other global brands and local players has heated up at that end of the market, posing a challenge for both. Several food safety scandals in recent years, and a preference for more upscale options by increasingly affluent Chinese diners, have also taken a toll on the two companies.

As part of its efforts to reverse its China fortunes, Yum spun off its Chinese unit into a separate company late last year to give it more flexibility and introduce local partners to help it navigate the market. McDonald's made a similar move with an announcement, also on Monday, that it was selling 52% of its China and Hong Kong stores to the local Citic financial services conglomerate.

The Taco Bell China opening is part of a broader global expansion for the brand, which is currently confined mostly to the United States. Taco Bell now has more than 7,000 stores worldwide, but only 300 of those are outside the U.S. It has said it aims to more than triple the international total to 1,000 restaurants by 2022.

“The opening of this Taco Bell restaurant in China is an exciting milestone for the brand as this market holds tremendous growth potential,” said Taco Bell Corp. CEO Brian Niccol. “We look forward to supporting Yum China as it builds Taco Bell’s presence in the country.”