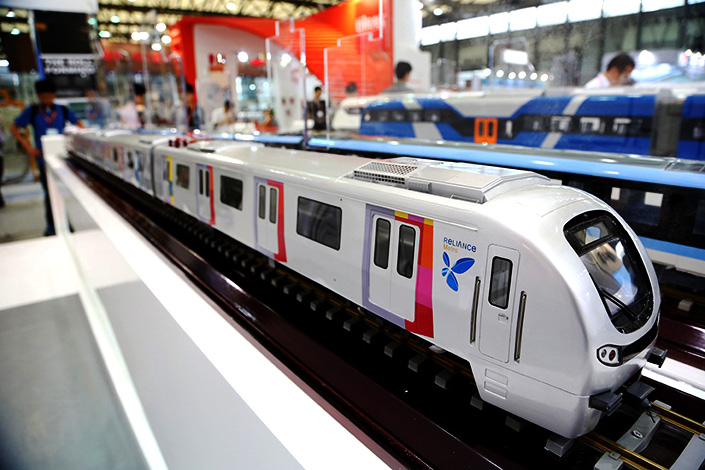 A model of a Mumbai Metro No.1 train is displayed at the China International Rail and Metro Exhibition on June 12, 2015, in Shanghai. CRRC Corp Ltd. has reached an agreement to sell 120 subway cars to the Massachusetts Bay Transportation Authority. Photo: IC

(Beijing) — Globally minded Chinese train maker CRRC Corp. Ltd. has scored an order from Boston’s subway authority to sell $277 million worth of subway cars, marking CRRC’s third such deal in the U.S. as it tries to export its technology.

The Massachusetts Bay Transportation Authority (MBTA) has decided to order an additional 120 subway cars from CRRC under a new contract signed in December, a source close to CRRC told Caixin.

The deal follows a 2014 agreement for the MBTA to buy 284 subway cars. Only the Chinese manufacturer was qualified to meet the authority’s requirements for the latest sale, negating the need for open bidding, the source told Caixin.

All of the 404 carriages in the two orders will be produced at a plant in the Massachusetts city of Springfield. That facility is still under construction and will be completed this year, the source said.

CRRC is undergoing a worldwide expansion, following a decade of development of its cutting-edge rail technology gained through China’s construction of a massive high-speed rail network and numerous local subway systems. In March, CRRC secured a $1.3 billion deal to supply 846 underground trains to Chicago.

The company has set up a U.S. affiliate in Boston to handle business and expansion in North America.

The train maker’s overseas footprint also includes its recent sale of three high-speed trains to the Czech Republic, its first such deal with a European Union member.

To build its image as an exporter, CRRC recently punished one of its subsidiaries for misconduct that undermined its reputation during bidding processes in countries that included India and Pakistan.

CRRC’s overseas deals last year had a contract value of $5.8 billion, while its overseas revenue grew 67% for the year to $26.5 billion.