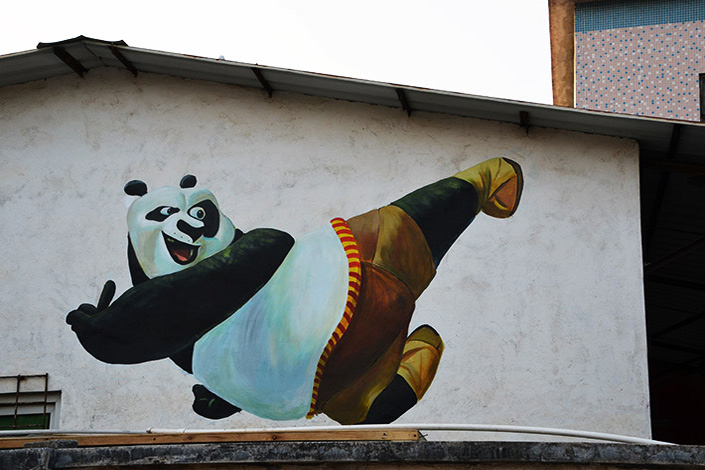 A painting of Po from DreamWorks Animation's "Kung Fu Panda" franchise is seen in a village in Dongguan, Guangdong province, on Dec.18. The Supreme People's Court has released an interpretation of the country's copyright law that offers better legal protection for the owners of "famous" creative works. Photo: Visual China

(Beijing) — In its first-ever interpretation of the country's trademark law, China’s highest court said celebrity names or titles and characters in “famous” creative works belong to those who can prove they were the first to use them and not those who registered them first.

Producers of creative works — including dramas, films and television programs — hold the “first-to-use” rights to the Chinese titles of their work and names of well-known fictional characters, the Supreme People’s Court said in a document released Wednesday.

The rule also applies to celebrities’ names, according to the new interpretation.

China’s new stance on trademark ownership is similar to that in the U.S., where actual use of a designation or a symbol creates rights. Now the rule in both countries is that ownership of a mark goes to the first to use, not the first to file.

But the Chinese interpretation includes a warning. It says “first-to-use” protection should be limited to titles and characters of “famous works” and names of people with “a proven commercial value,” said Song Xiaoming, the Supreme People’s Court judge heading a unit overseeing civil cases. But the top court failed to clarify who or what qualifies as a “famous individual or work.”

Titles of artistic works and names of characters weren’t protected under Chinese law, and judges were left to rule on trademark violations on a case-by-case basis.

The new interpretation will help develop unified criteria that can be adopted by courts across China, according to legal experts.

The Supreme People’s Court also decided to clarify the trademark ownership law to address the rising numbers of trademark disputes in recent years where, Song said.

The Supreme People's Court ruled earlier last month that the company's brand name, which shares the same two Chinese characters as the Chinese translation of the basketball legend’s surname, violated Jordan's rights to his name.

The court also ordered the Trademark Review and Adjudication Board, an arbitration body affiliated with the State Administration Industry and Commerce which backed the Chinese company, to review its decision.

The new interpretation will come into effect on March 1.