By Liao Yuanxin and April Ma 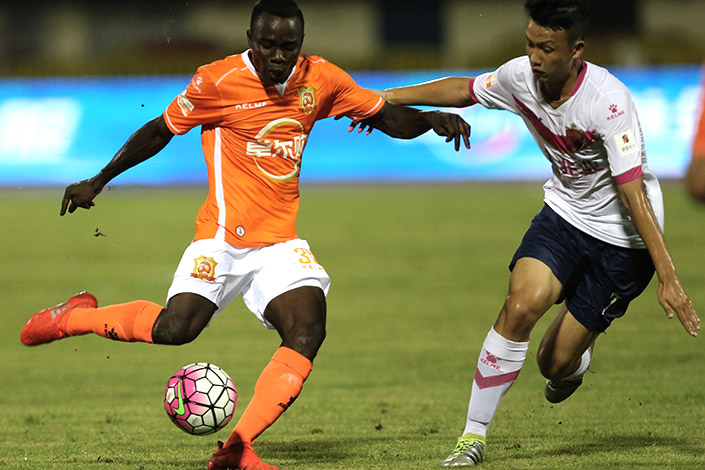 Two soccer players compete in a Division A league match of the Chinese Football Association on July 23 in Wuhan, Hubei province. The CFA has announced measures to control excessive spending on expensive foreign players. Photo:Visual China

(Beijing) — China’s official soccer association for the first time revealed its annual revenue goals and spending budgets, part of a drive to increase transparency and improve the reputation of a game known in the country for corruption and other crooked behavior.

The association is the sole body governing Chinese soccer, overseeing championships from junior league games to the Chinese Super League and the national team. It generates revenue mostly through taking a cut in sponsorships.

“Not a lot of associations have the confidence to publish goals and expectations. This is definitely a step up for the soccer association,” said Xiao Liangzhi, a sports commentator and columnist. “This shows that the body has thought out a clear battle plan that will make these goals attainable,” he added.

This year the association plans to spend chiefly on the national team, junior league training programs, women’s soccer, organizing championships, and promotion and popularization of the sport.

Analysts said that though the move to disclose fiscal goals is an encouraging one, showing a determination to launch professional and market-oriented reforms, the figures themselves cannot really say much about what to expect this year.

“The figures look pretty big, but at this stage, without further detail about how the funds will be allocated on different levels, they are devoid of actual meaning,” said Wu Celi, a commentator and author of Behind the Scenes of Chinese Soccer.

The supervisory body is one of the chief flag-bearers of the nation’s top-down soccer reform, spearheaded by President Xi Jinping, a devout fan of the sport. The association rolled out game-changing policies at a separate meeting on Sunday that will reduce from five to three the number of foreign players that a team can use in a game. The new rules follow a government call to curb excessive spending on foreign soccer stars, which Chinese Super League clubs have poached with astronomical contracts.

Government authorities have also been critical of a recent global shopping spree that has seen Chinese investors pay about a combined $2 billion for 15 European soccer clubs in the past two years. The People’s Daily, the official newspaper of the Communist Party, wrote last month that the investment binge may represent a “bubble.”

At the Sunday meeting, the association explicitly disapproved of such irrational investment and extravagant salaries, prompting some to guess that additional rules on those matters might be coming soon.

“Many of the policies and spending plans seem arbitrary,” conceded Xiao. “But China’s soccer has been become quite warped following the past years of frenzy, and only administrative measures will help put it back on track.”