By Song Shiqing and Liu Jiaying 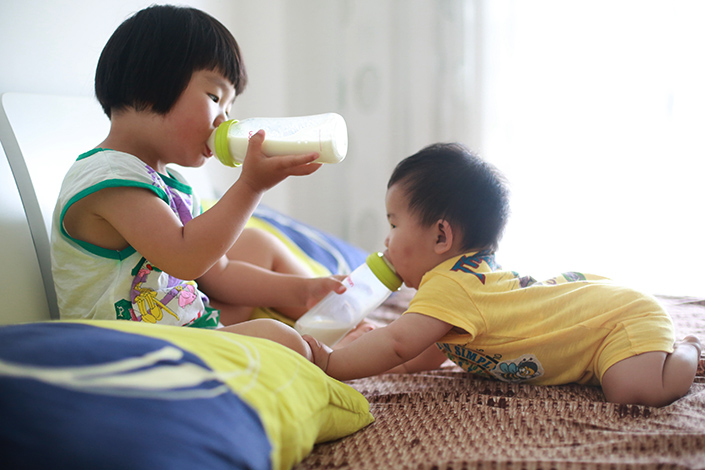 A girl feeds her little sister and herself at the same time in Taizhou, Zhejiang province, in May 2013. Families in Zhejiang receiving court orders to pay overdue fine for the second child before 2014 are saying they shouldn't have to pay as the one-child policy was abolished at the end of 2015. Photo: Visual China

On the first day of China’s 2017 Lunar New Year, a shop owner in Zhejiang province said he found an enforcement notice posted on his front door that ordered his family, whose monthly income is less than 10,000 yuan ($1,450), to pay an overdue fine of 170,000 yuan for having a second child.

The fine, dubbed a “social maintenance fee,” is in effect a punishment for violating China’s now-defunct one-child policy. The shop owner’s second child was born in July 2014, well before Beijing scrapped its three-decade-old one-child rule in October 2015, allowing all couples in China to have a second child. The new law took effect the following Jan. 1.

If the shop owner — who sells car-seat cushions — doesn’t pay, the local court will block the family bank accounts, and authorities will limit the couple’s ability to buy railway tickets and to stay in hotels. According to a notice issued by the Tiantai County People’s Court, their names will be put on the government’s “List of People with Bad Credit,” an online publishing blacklist created to punish violators that is shared with major commercial and state-owned banks.

For the 35-year-old vendor, the punishment would be disastrous to his small Tiantai business, which support his whole family.

“I must pay the kindergarten (preschool) 2,000 yuan each month for my first child. I can save less than 20,000 yuan in a year,” he said. “I can hardly support my two kids. I don’t understand why they want me to pay the fine.”

He says he doesn’t even understand why the fine still exists, since Beijing has already recognized the problem of the country’s aging population and dwindling workforce by adopting a universal two-child policy.

China’s average annual total fertility rate (TFR) from 2010 to 2014 was only 1.2 babies per woman. The TFR dipped further to just 1.05 for 2015 — the world’s lowest fertility rate compared with the 2014 figure of all countries, according to data published in the China Statistical Yearbook 2016.

“What could be wrong about having a second child in this aging society?” the Zhejiang shop owner said.

Give power to the local government

His experience is not an isolated case. A total of 109 families in Zhejiang received a similar notice in January about fines for a second child. Their “social maintenance fees” ranged from 3,000 yuan to 190,000 yuan, according to judgment documents released in a Zhejiang government website set up to publicize court information.

In October 2015, the Communist Party of China’s 18th Central Committee decided to abolish the country’s longstanding one-child policy and roll out a universal two-child policy, which officially took effect on Jan. 1, 2016.

As for second children born one or two years earlier, the central government has told local governments to judge “for themselves” whether to levy fines and if so, how much they should be.

“In a case where the government has already made the decision to fine, then it should collect the fine. But if the decision hasn’t been made yet, the local government can judge by itself,” said Yang Wenzhuang, a deputy director of the National Health and Family Planning Commission.

Under such a general guideline and without any uniform standards, provincial-level governments have dealt with the issue in different ways. While the Zhejiang government is taking a tough line, other provinces like Shaanxi have adopted a relatively relaxed policy on second children.

Han Manli, a mother from central Shaanxi, said she has never paid a fine nor received any government notice after her second child was born in April 2015.

But for most provinces, having a second child in 2014 or 2015 seems to be an offense that can be punished, but is negotiated on a case-by-case basis.

In eastern Fujian province, one two-child parent told Caixin that last March, the local government urged him to pay the social maintenance fee. He didn’t pay and hasn’t been contacted since. Now he’s worried because he has learned that many parents who didn’t pay the fine have been quietly put on the government’s “List of People with Bad Credit.”

Another father, surnamed Lin, from Zhangzhou, said that after he gave some “gifts” to local family planning officials, they agreed to let him pay less. He was fined 20,000 yuan last year. He had been levied a fine of 60,000 yuan in October for his second baby, who was born in 2014.

The city and county government set the amount of the fine according to the violator’s social position and financial condition, as you can’t find any specific legal provisions on the standards to set the fine amount, said Zhejiang, the shop owner.

Who benefits from the fine?

An article published in December 2013 on the website of the Tiantai county government complained about the county-level government’s excessive freedom to judge the amount of family planning fines, and disclosed how the funds were spent.

“In some towns and villages in Tiantai, 80% of the social maintenance fees are used for government receptions, as well as being given to civil servants as salaries and bonuses,” the article said.

In four townships, the family planning bureaus, which normally collect the fines, were found to have seized more than 5.3 billion yuan in social maintenance fees instead of handing the money over to the local treasury department as required by Chinese law. In a few cases, that enabled them to use the money to earn a profit by making home loans, according to the article.

Twenty-four provinces across China collected a combined 20 billion yuan in 2012, according to a Zhejiang lawyer named Wu Youshui. He sent letters to the 31 mainland provincial-level governments in 2013 asking officials to disclose how much they have collected in family planning fines and how they used the money. Only 24 replied, but none disclosed how the money was spent.