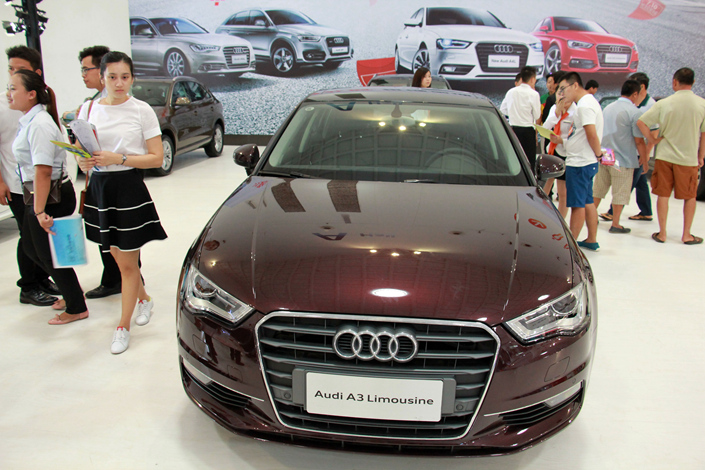 Visitors at an automobile exhibition check out an Audi A3 limousinein Haikou, Hainan province, in July 2015. The German luxury-auto brand is the latest carmaker to show plunging China sales in January. Photo: IC

(Beijing) — Luxury carmaker Audi AG said its China sales plunged 35.3% in January as it faced lingering fallout from a clash with its dealer network and growing competition from German rivals Mercedes-Benz and BMW AG in the world’s largest auto market.

Audi, a division of Volkswagen AG and the largest luxury-car seller in China, said the steep decline brought its China sales to 35,181 vehicles for January. It blamed the drop on “restrained” activity by its China dealers as it focused on developing a “long-term, strategic growth plan for the coming decade” with FAW Group Corp., its main Chinese partner, according to a statement released on Tuesday.

Audi surprised FAW last autumn when the former announced plans for a second production base in China with Shanghai’s SAIC Motor Corp., Volkswagen’s main China joint venture partner. That deal also upset Audi’s current China network of dealers, many of whom feared they would lose business to a new rival network that would sell cars produced by the Audi-SAIC tie-up.

Audi’s 431 China dealers protested in November by threatening to stop increasing their stock of cars unless the German company responded to their concerns. As a result, Audi ended talks with SAIC on such a network and agreed that it would resume talks later only if it could ensure long-term stable profitability for existing dealers.

Audi’s January sales plunge came as its top two German rivals, BMW and Mercedes-Benz, reported strong growth for the month. BMW reported earlier this month that its China sales grew 18.2% to 51,345 units, while Mercedes-Benz’s sales jump 39.3% to 58,799. Both companies said January marked the first month ever for them to pass the 50,000 vehicle mark in China for a single month.

The weak Audi figures, combined with the strong numbers from its rivals, marked the first time ever that Audi’s monthly sales in China slumped behind both BMW’s and Mercedes-Benz’s.

But leading U.S. carmakers Ford Motor Inc. and General Motors Co. also saw large drops of 32% and 24% in January respectively, as both were hit by reductions in a tax rebate plan that was part of a program by Beijing to encourage purchases of lower-polluting cars. Analysts said the decline could also be due partly to seasonal factors, since the weeklong Chinese New Year holiday began in January this year and not in February as in 2016.

China is the world’s largest automobile market, with sales rising 13.7% last year to more than 28 million vehicles on the back of strong demand from the nation’s growing middle class. But growth is expected to slow sharply this year with the lower government incentives and as the broader economy slows, with the China Association of Automobile Manufacturers predicting just 5% expansion for 2017.