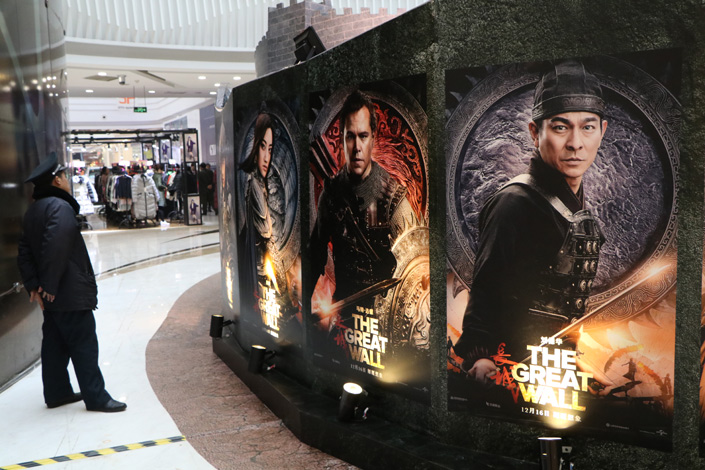 (Beijing) — Hopes that the extravagant China-Hollywood joint production The Great Wall will be a blockbuster have taken a hit following its less-than-stellar debut in North America.

Directed by Zhang Yimou, often called “China’s Steven Spielberg,” the $150 million production took in $18 million at the box office during its premier weekend in the U.S. and Canada, according to statistics from consultancy Comscore.

The figure looks lackluster next to the $450 million goal the film needs to break even, based on the general rule in Chinese film circles that allots one-third of ticketing revenue to production companies.

The film, starring Matt Damon, has already brought in $262 million worldwide, but it is still $188 million, or more than a third of the way, from this benchmark. Screenings in China, its target market, have brought in earnings of $170 million.

On average, films that earn $15 million to $20 million in the debut weekend in North America eventually bring in total box office earnings of about $65 million, according to calculations from Box Office Mojo.

The receipts may indicate that the China-Hollywood model is anything but a surefire combination to win hearts from both sides of the globe.

In China, its performance has hardly been outstanding compared with the comedy Kung Fu Yoga and fantasy Journey to the West: Demons Strike Back, with both productions each spending less than $60 million and taking in $244 million each in earnings.

This is hardly surprising, as The Great Wall — a historical fantasy about Western mercenaries joining forces with Song Dynasty troops to slay bloodthirsty saurian beasts — has been blasted by critics both at home and abroad.

“What a bummer that all Chinese master Zhang Yimou and Hollywood star Matt Damon come up with is a B-level creature feature with delusions of grandeur,” remarked Rolling Stone critic Peter Travers. Other reviews sprinkled comments like “a video game on a big screen,” “bland” and “numbly repetitive.”

“Zhang Yimou Is Dead,” concluded critic Xiedu Film after the Chinese premier in December, lamenting the slide of China’s best-known director, who created classics such as Raise the Red Lantern and Red Sorghum.

Initially, The Great Wall’s producers were confident the film would win acclaim across continents. Peter Loehr, CEO of Legendary Pictures affiliate Legendary East, confidently affirmed before it reached theaters last year that it was “intended to appeal to a global audience from the start,” and “only happened to have Chinese themes.”

However, Nick Carpou, president of co-production company Universal Pictures, has revised that line, downplaying the importance of the world’s largest film market upon a discouraging release.

“The U.S. is not the driving market and just one part of an overall strategy,” he said. “It just opened No. 1 in Russia.”