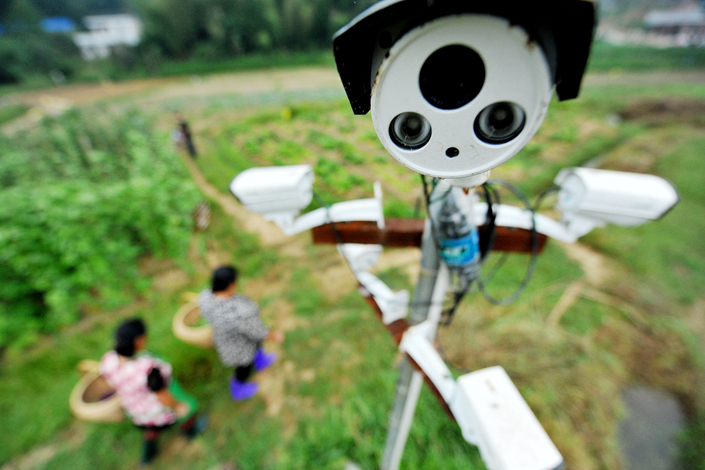 A 24-hour online monitoring camera is stationed in an agriculture cooperative in Dexing, Jiangxi province, in September 2015. Chinese farmers are increasingly relying on big-data analytics instead of personal experience to manage their farms. Photo: IC

When Lin, an asparagus farmer in Guangdong province, wants to check on his crops, he pulls out his smartphone. An app called Nongyan (Mandarin for “farming eye”) sends him readings from sensors in his fields.

If he notices the soil temperature climbing higher than 28 degrees Celsius, Lin, a former engineer, responds by misting his plants to make sure their roots stay moist.

“Asparagus is a thirsty crop,” he explains.

Lin is one of many Chinese farmers who now depend on big-data analytics to manage their farms.

These decisions, thanks to a growing interest in big data, are increasingly being based on algorithms rather than human experience.

This change is driven by a combination of top-down reforms, increasingly well-educated young farmers, and agriculture companies sensing a gap in the market.

Zhulianwang’s mobile app can give farmers real time updates on sows’ fertility status, predict when pigs will be fully grown and ready for slaughter, and tell when a litter is due to be delivered, or weaned. If pigs fall ill, farmers can send queries via Zhulianwang to online veterinarians.

Zhulianwang uses location data from individual queries to form a map of regional disease trends, and when the volume of queries from a particular location reaches a certain level, the platform issues epidemic warnings.

At the moment, about 60% of the data Zhulianwang collects comes from users manually submitting information. But data collection is becoming increasingly automated. For example, Nongxin Hulian recently introduced an ultrasound scanner that seamlessly collects data whenever farmers use it.

A major aim of Zhulianwang is to help farmers raise as many pigs as possible.

“We found that pigs were being bred very inefficiently, and the fundamental reason was that farmers lacked information,” Nongxin Hulian President Xue Suwen said.

Farmers traditionally decide when to wean and breed pigs based on their personal knowledge of pig physiology, but that’s no match for the precise algorithms services like Zhulianwang uses. According to the company, farms using Zhulianwang produced two more “growers” (the industry term for weaned pigs) for every sow in 2016, compared to the previous year.

It’s not just farm management practices that are being transformed. Zhulianwang also offers financial services to farms, traders, and slaughterhouses. Being able to access vast quantities of data on livestock means lenders can assign more accurate credit ratings to businesses in the pork industry, Xue said.

An executive at agricultural data startup Hua Nong Tian Shi Technology Co. Ltd. told Caixin that many of the customers she encounters are second-generation farmers who have returned to their home provinces to work in agriculture after graduating from college, and who are willing to invest more in efficiency-raising technology.

Another factor is the increasing circulation of agricultural land in China. Farmland in China is owned by the state, and those who have the right to work the land cannot always transfer this right at will. But the central government has in recent years relaxed restrictions on rural families leasing out their land use rights, which means it’s now easier for large-scale farms to consolidate land and expand operations.

“After the right to cultivate the land has changed hands, the new users of the land aim to maximize profit, and cut costs, so they need precision,” said Yi Binghong, CEO of AirAG.

For companies providing big-data services, the motivation is often simply to grow their main businesses.

Wen Han Qiuzi quit a research position at a Canadian government agency in 2014 to found Hua Nong Tian Shi in Beijing. At the time, most of the provincial authorities and farmers she spoke to thought that big data was a nice idea, but an abstract one far removed from the reality of their own lives. But the central government’s 13th Five-Year Plan, released in 2015, brought big data to the forefront as a real, practical way to reform the country’s agriculture sector, Wen said.

In late January, China’s Ministry of Agriculture announced its intention in 2017 to encourage the integration of big data analytics into four main areas: planting, protected horticulture, livestock breeding, and agriculture.

Consumers are also a major reason for the move toward big data in agriculture. Chinese consumers today are increasingly concerned about nutrition and food safety, Yi said. Allowing consumers to access data collected about crops in the field can “help them quickly judge the pros and cons of each product.”

Zhu, another Guangdong farmer, has an orchard with over 1,000 pomelo trees. His main reason for using Nongyan is so that “consumers can understand how exactly our pomelos are grown, and know that our fruits are safe to eat,” said Zhu.

Growers using Nongyan can tag their produce with QR Codes, which consumers can then scan using smartphones to access information on where and how each item was grown.

Expectations are high for how big-data analytics can change China’s agriculture sector. But the technology, and the companies that offer it, are still in their infancy.

“At least 70% of companies offering big data services in agriculture don’t actually have enough data at the moment. It’ll take them another two or three years to collect all the data they need,” Xue said.

Additionally, big data service providers face an uphill task convincing more traditionally minded farmers to abandon their existing methods. It doesn’t help that the quality of farm management apps available today is inconsistent. Farmers have complained that some apps are impractical to use, or “don’t help very much” to raise farm productivity.

Asparagus farmer Lin looks forward to the day when agriculture apps can provide even more detailed, dynamic monitoring of crop conditions, including factors like soil pH and salinity.

The real key to improving crop quality is a “deeper understanding of soil,” Lin said.

Other industry insiders say Chinese companies need to provide one-stop comprehensive platforms in order to be of real use to farmers. The agricultural model of the future will integrate information on numerous factors as diverse as environmental conditions, warehousing and logistics, and provide links to third-party services like agricultural loans, insurance, and futures trading, former Monsanto China executive Liu Shi said.

“U.S. companies like Monsanto and Cargill are already aware of this, and are racing to perfect this system,” Liu said.