By Yang Ge and Shen Yuyun 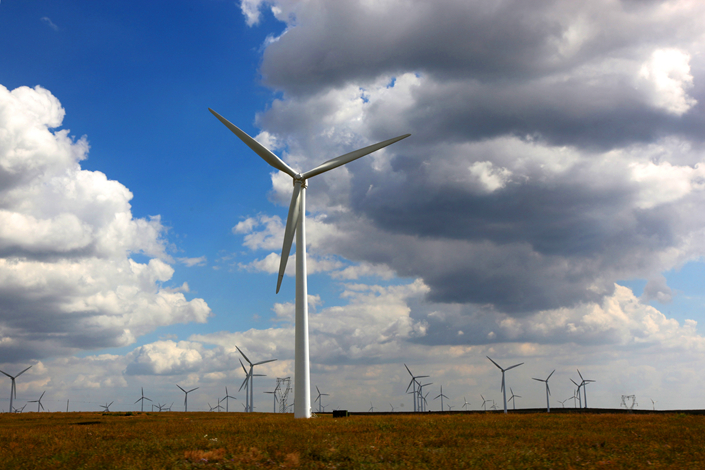 Windmills for generating electricity are seen in the Inner Mongolia autonomous region in August 2015. China's National Energy Administration has suspended any new wind-power projects in six provincial-level governments, saying they had too many wind farms unconnected to the national grid. Photo: Visual China

(Beijing) — Shares of wind-power equipment makers sagged on Friday after Beijing said it will suspend all approval for new projects in six provincial-level regions due to poor planning of previous wind farms there.

The weak performance came after the National Energy Administration issued a directive giving “red” warning labels to Heilongjiang, Jilin and Gansu provinces and the Inner Mongolia, Ningxia and Xinjiang autonomous regions. That means no new wind-energy projects will be approved for those areas this year.

The agency issued the prohibition after finding the six governments had unacceptably high levels of wind farms that remained unconnected to the national grid, meaning any power they generated was wasted. Gansu was the worst among the six, with a wasted capacity rate of 43%, followed by Xinjiang and Jilin at 38% and 30% respectively.

Gansu and Xinjiang had posted much-lower wasted capacity rates of 4% and 6% respectively in 2015.

Generating activity within the six regions was also below the national average of 1,742 hours. Within that category, Gansu was also the least efficient, averaging just 1,088 hours, followed by Xinjiang at 1,290 hours.

The NEA set up its warning system last year, consisting of “red”, “orange” and “green” ratings, after the rate of wasted projects started to rise sharply in some areas.

China has embarked on an ambitious program to promote renewable energy, including incentives for companies to build solar and wind farms. But many of those projects have been poorly planned, resulting in the jump in wasted capacity, often because projects can’t be connected to the national grid.