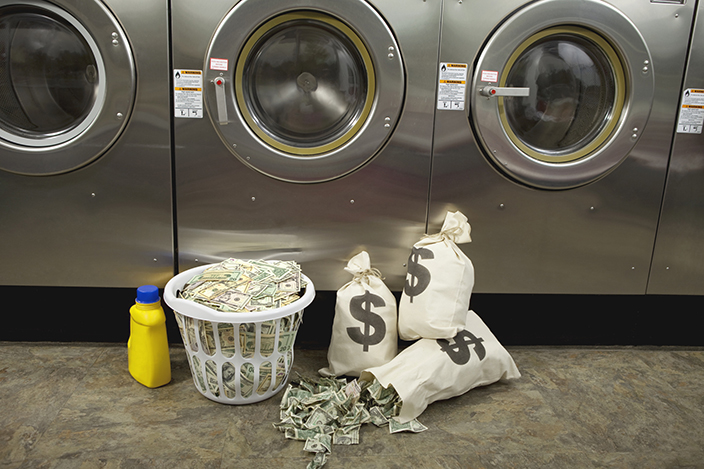 (Beijing) — At their annual meeting in February, People’s Bank of China officials pledged a tougher fight against money laundering.

A few days later, the China Banking Regulatory Commission complemented that pledge by urging Chinese banks with overseas operations to intensify the battle against money laundering and terrorism financing.

Behind this clarion call by Beijing’s bank supervisors was an unnerving realization that some of the nation’s biggest banks had left themselves vulnerable to anti-money-laundering sweeps by regulators abroad.

This vulnerability stems from ambitious overseas expansions in recent years by the Bank of China (BOC), the Industrial and Commercial Bank of China (ICBC) and other powerful, state-owned lenders. As of June, according to official data, China's biggest bank, the ICBC, was operating 412 branches in 42 countries, while the BOC had 564 branches in 46 countries. China Construction Bank (CCB) counted 140 overseas branches, and Agricultural Bank of China (ABC) had 17.

At home, according to banking experts who spoke with Caixin, Chinese banks have been operating in a regulatory environment that’s generally soft on money laundering rules for financial institutions. Some of these banks have thus learned the hard way that many regulators outside China not only diligently enforce rules designed to prevent dirty transactions, but are also eager to slap violators with heavy fines and even imprisonment.

The BOC, the nation’s fourth-largest lender, reportedly agreed on Feb. 17 to pay 600,000 euros ($634,000) to settle a money laundering case involving its branch in Milan, Italy. The branch had been targeted by Italian investigators since June 2015 who had looked into whether BOC helped clients transfer to China about 2 million euros linked to criminal activity.

In addition, a judge in the Italian city of Florence on the same day handed four BOC-Milan branch employees two-year suspended prison sentences after they were convicted of breaking Italy’s anti-money-laundering laws.

A Hong Kong-based expert on money laundering who declined to be named said while the fine against BOC-Milan was comparatively “moderate,” the criminal convictions were “surprising.”

The decisions in Italy followed a November decision in the United States by New York state’s Department of Financial Services, which fined a local ABC branch $215 million for illicit money transfers.

The case took a toll on ABC officials in China. Caixin learned from sources close to the matter that the Communist Party expelled a former ABC-New York general manager, Yu Ming, in connection with the scandal.

Yu also lost his job after the New York decision and is now being investigated by Chinese regulators, the sources said. In addition, the source said, two other senior branch executives have been punished.

In a separate case, CCB was targeted in 2015 by U.S. officials fighting money laundering. And in 2016, officials in Spain took aim at the ICBC.

In an interview with Caixin, a central bank official who declined to be named said that unless Chinese bankers learn from these mistakes, others from among their ranks could be targeted by overseas anti-money-laundering probes in the future.

ABC’s case stands apart from the rest as the first in which a Chinese bank was fined by overseas regulators for directly violating laws aimed at preventing money laundering.

Taft first approached Federal Reserve Bank of New York officials in 2014 about concerns over money laundering risks tied to ABC’s international trade financing transactions. She claimed to have repeatedly warned bank managers about money-transfer problems, such as flaws in customer-identity tracking operations, but was ignored.

Taft claimed that after she became a whistleblower, ABC officials retaliated by forcing her to quit.

Sources close to ABC’s New York branch said the rift between Taft and management was tied to a business strategy that stressed rapid expansion and had been pushed forward by the then-general manager of ABC-New York, Yu Ming.

After the branch opened in August 2012, Yu worked to boost the ABC’s interbank-transaction business through trade financing and other services. His goal was to quickly expand assets at the branch, which was ABC’s only operation in the United States.

But Yu’s strategy apparently exposed the branch to compliance risks, as his favorite businesses involved transactions executed on behalf of other banks’ customers. And ABC had limited access to information about those customers.

Yu maintained his strategic focus despite a 2014 warning by the central bank pointing to risks associated with overseas banking services.

But that same year, Taft’s allegations landed on investigator desks at the New York Fed, triggering a probe that led to a Fed order in September: ABC was given 60 days to deliver a plan for fixing risk management flaws and enhancing money controls at the New York branch.

Sources close to the matter said an original fine of $500 million was eventually cut by more than half following negotiations between regulators and ABC-New York. The branch also agreed to hire an independent, regulator-approved monitor to assess its business.

“After the incident, ABC (headquarters in China) held several meetings emphasizing managing overseas branches and subsidiaries,” said a source at the bank.

Nevertheless, the bank’s reputation had taken a major hit. In November, for example, the credit rating agency Moody’s said the regulatory penalty had highlighted oversight failures at ABC and would have a negative effect on the bank’s credit rating.

Chinese banks are generally less stringent than those in developed countries in terms of customer due diligence and managing large-scale money transfers, said Yu Wenqian, a partner in the fraud investigation and dispute-services division at the accounting firm EY (Ernst & Young). As a result, he said, Chinese banks are more prone than others to money laundering risks.

Chinese regulators haven’t been sitting on their hands, though. A regulatory framework designed to rein in money laundering started taking shape in 2003. Rules have been written and government agencies assigned to combat the problem.

But China’s efforts trailed by several years the efforts of U.S. and European regulators, who were determined to undermine the underground financing of terrorist activity.

According to EY’s Yu, the global anti-money-laundering effort grew significantly in 2012 when various government agencies expanded their efforts to rein in internet-based transaction platforms.

In fact, to date the penalties imposed worldwide on Chinese banks pale when compared to those levied against several other financial institutions. For example, U.S. authorities in 2014 fined the French bank BNP Paribas a record $8.9 billion in connection with money-laundering charges. That same year, the U.S. bank JPMorgan Chase was fined $2.6 billion at home in connection with suspicious money transfers.

Under the law, a financial institution found guilty can be fined up to 5 million yuan ($727,000), while a guilty individual can be forced to pay up to 500,000 yuan. These are “the harshest penalties” meted out in China for violators of any law or regulation, said an anti-money laundering official at the central bank.

The law also gives the central bank the power to suspend or revoke a business license of any institution found guilty of breaking money-laundering rules.

But the central bank has never exercised this power.

Chinese “regulators have advocated for anti-money laundering activity for years, but there has been little, real action,” said an executive at a commercial bank who declined to be named.

The Chinese regulatory approach has generated criticism among financial market analysts, particularly in connection with the ABC-New York case. Critics argue that domestic investors who hold ABC stock, which trades on the Shanghai Stock Exchange, have yet to receive any information from the bank about the U.S. investigation.

Because regulators are soft, according to banking industry experts who spoke with Caixin, China’s financial institutions have had a generally lukewarm enthusiasm in the fight against money laundering.

“There are no consequences if nothing is done” by a bank in China that chooses not to combat money laundering, one expert said.