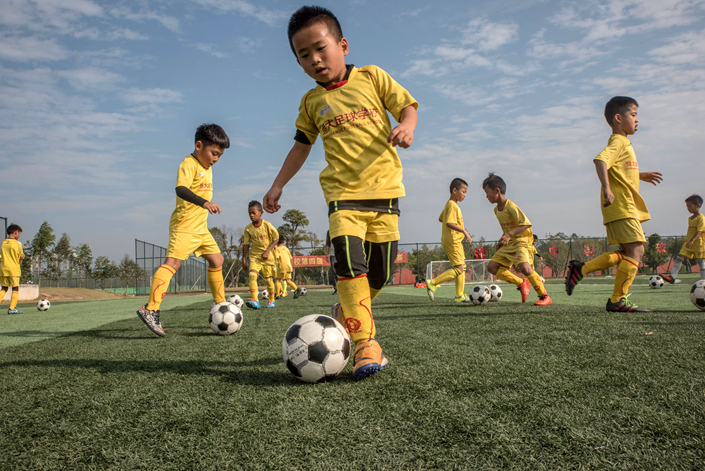 (Beijing) — FC Barcelona, one of the world’s top soccer clubs, has teamed up with a Chinese private resort developer to launch a joint-venture school in the southern island of Hainan to tap into demand for soccer training in the country.

The new school, which will open in Haikou in Hainan province in September, is Futbol Club Barcelona’s 25th overseas soccer school, but the first to be managed by the Spanish club, which is currently ranked second in Spain’s premier league.

“We’re honored to be able contribute to the development of the sport in China and to help the country fulfill its goal of becoming a soccer powerhouse,” FC Barcelona’s president Josep Maria Bartomeu told the official Hainan Daily.

News of the joint venture comes after China’s Ministry of Education announced plans last week to develop 50,000 schools specializing in soccer training by 2025, with two-fifths of them to be completed by the end of this year.

The plan is part of China’s ambitious goal of becoming a world-class soccer power by 2050, according to a central government blueprint released in April last year.

FC Barcelona and Mission Hills Group, a Hong Kong-based resort developer, will each spend four million euros ($4.23 million) to build the school in Hainan with seven pitches, which will enable it to accommodate 1,000 students aged between 6 and 18, according to a teacher at a different FC Barcelona school in the eastern port city of Qingdao.

Unlike the school in Qingdao, an FC Barcelona franchise, the Spanish club will be involved in the management of daily operations at the Haikou school, according to the teacher who was briefed about the new school.

FC Barcelona and its Chinese partner have not revealed how much they will charge students, but the teacher estimated fees as being 700 yuan a month for a two-month training session.

The school in Haikou will be modeled on La Masia, a Barcelona youth academy known for training such superstars as FC Barcelona striker Lionel Messi.

According to the Hainan Daily, soccer superstar and former FIFA World Player of the Year Ronaldinho will come to Hainan to teach at the Haikou school.

The country’s leaders, particularly President Xi Jinping, have made no secret of their love for the beautiful game.

Aspirations for China to boost the country’s standing in world soccer has prompted many Chinese soccer clubs to spend big on foreign recruits coming to play in China’s Super League, which authorities hope will boost the skill levels of Chinese players.

Shanghai Shenhua signed a two-year contract for a reported $764,000 per week with Carlos Tevez in December 2016, making him the highest-paid footballer in the world.