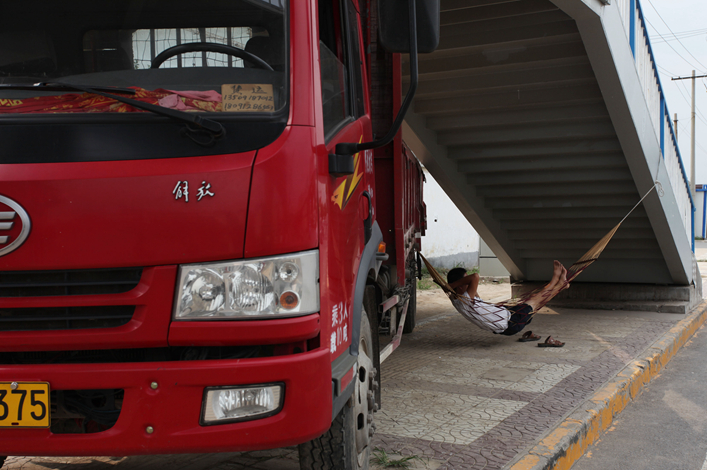 A truck driver relaxes in the shade of a bridge while waiting for freight business outside a wholesale market in Xi'an province in July 2013. Smartphone apps are revolutionizing China's trucking industry, as technology supplants a system that had depended on chalkboards. Photo: Visual China

(Beijing) — Back in the day, truckers in the world’s second-largest economy never left a logistics park without checking cargo-delivery notices scrawled on dispatcher chalkboards.

Truckers typically crowded around chalkboards hanging from “trading floor” walls, shouting out bids for road freight deliveries before loading up and hitting the road.

Fan Sheng, a former dispatcher and freight forwarder in Chengdu who spent years scratching out notices and taking bids from drivers eager for loads, remembers reporting for work at 7:30 a.m. and matching truckers and available cargo within half an hour.

“It was so hectic,” recalls Fan, whose office arranged loads of cabbages, bolts of fabric, glass panes, livestock and much more for up to 8,000 drivers every day. “Those were the days.”

But those days are fading quickly now that online apps for dispatching road freight are replacing the old chalkboard-and-shout system. Truckers with smartphones and internet access are finding freight without middlemen, picking up loads wherever cargo originates and making deliveries without having to stop at logistics parks.

Apps like Yunmanman and Huochebang, two dispatch platforms that are adding a layer of transparency to the business and attracting a great deal of investor attention, enable drivers to see in real time the vehicle specifications — such as refrigerator trucks or flatbeds — and destinations for each batch of cargo. If any of the requests look good, they can call the cargo owners for more details before hitting the road.

They have been credited with boosting road-freight efficiency while helping truck drivers save fuel, time and money.

The apps have thus disrupted logistics industry traditions, such as the use of chalkboards and dispatchers. Indeed, a number of cargo dispatchers, including Fan, have been driven out of business by apps over the past two years.

Winds of change are also blowing through logistics parks, which in recent years have been growing in number nationwide in step with a government directive to streamline the road freight business. Trucks carry an estimated 75% of the nation’s commercial cargo.

China has been trying to ramp up efficiency in logistics, spent billions of yuan building what’s now a state-of-the-art highway network over the past two decades.

But the nation’s estimated 5 million truck drivers are the engine powering the logistics system. And the vast majority — nearly 9 out of 10 — are independent contractors.

The nation has realized that dispatch platforms, a model commonly referred to as “internet+logistics,” can bring out the potential of the underperforming industry.

The model has long been touted by Premier Li Keqiang as both a new economy and a way to breathe new life into an old tale. “Integrating the internet, cloud computing and big data with logistics is the essences of the industry’s supply side reform,” he said in July.

Apps have given independent drivers an added layer of independence by freeing them from their longtime dependency on dispatchers, freight forwarders and logistics parks.

Cargo owners traditionally entrusted their delivery orders to forwarders and other middlemen. The system sometimes allowed for several tiers of agents working between the cargo owners and truck drivers. In exchange for processing paperwork, each agent took a cut from the amount that cargo owners pay for road transportation.

It was a lucrative arrangement for the middlemen. Fan said he “could get as much as a 50% markup on a batch of cargo.”

But the system often left truckers with the short end of the stick. According to a report from Industrial Securities, traditionally more than 40% of trucks in China run empty on one leg of every delivery trip. And a single truck traveled an average of only 300 km a day, compared with about 1,000 km daily in the United States and Germany.

Cargo shipping is thus expensive in China. According to Industrial Securities, logistics costs in China are higher than in many wealthy nations, accounting for more than 16% of domestic gross domestic product (GDP).

Drivers typically traveled more than 100 km between dispatch centers and cargo origination points, such as factories and industrial parks. And after delivering freight, drivers in empty trucks journeyed back to a center in hopes of finding another customer.

“Drivers aren’t able to take a load on the way back (after a delivery) because they’re reluctant to deviate from familiar routines,” Miao said. “They do not know how to manage their time and routes.”

Yunmanman and a rival app called Huochebang were designed to give the trucking industry a makeover.

Originally described as “Ubers for freight cargo,” these companies’ services are considered more technically adept than those offered by ride-hailing apps. Their complex algorithms can guide a driver to multiple destinations and help get the most out of each trip.

In the process, road freight apps have turned investor heads. Industry leaders Yunmanman and Huochebang, for example, have yet to turn a profit, but both are valued at more than $1 billion. They could be worth much more in the near future.

“There is value in what we do,” said Huochebang co-founder Liu Xianfu, who used to be a freight forwarder. “It’s more about creating added value than simply eliminating information asymmetry.”

Logistics app investor Peng Zhijian said there’s a big difference between ride-hailing and trucker apps. “Road freight is much more complicated than urban passenger travel,” Peng said. “Navigating an 18-wheeler from one end of the country to another requires more experience and expertise than cruising through town in a sedan.

“Precisely because the sector is so much more complex (than ride-hailing), and the value chain longer, there are more monetizing opportunities.”

Guo Shanshan, a partner at Sequoia Capital, a firm that has invested in road freight apps, calls each these services “an information network for road transportation” that is far more than “a platform matching delivery requests.”

Huochebang has tried to add value by distributing to drivers about 1 million cards that track mileage and toll payments. The data can help a driver build a credit history and qualify for loans.

Meanwhile, Yunmanman is using driver data as a springboard for targeted advertising for companies selling fuel, tires and used vehicles to truckers.

Among the experts fully convinced that these apps are the future of road freight logistics is Zhang Yuansheng, who used to be an investment projects director at Merrill Lynch Asia Pacific. He now works for Huochebang.

“This is a trillion-dollar market,” Zhang said.