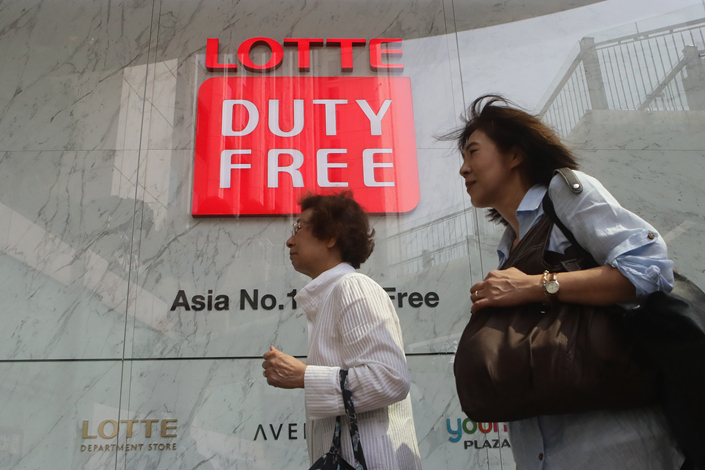 Lotte Co. Ltd.'s official China website has suddenly gone offline, as the South Korean company faces a backlash in China from its decision to sell its nation's government a Lotte golf course to use for a U.S. anti-missile defense system. Photo: Visual China

(Beijing) — South Korean retail giant Lotte Group’s decision this week to allow a golf course it owns to be the site of an anti-missile defense system strongly opposed by Beijing has sparked some backlash in China — and possibly a hack of its website.

Meanwhile, Lotte’s stores in China felt some sting over the controversy. Luohe Pingping Food Co. Ltd. announced on Wednesday that it will recall its popular hot-strips snacks from all Lotte stores in China.

A number of Chinese companies voiced support for Luohe Pingping’s move on the social media platform Sina Weibo, including smartphone makers Xiaomi Inc. and Meizu Technology Co. Ltd., and home-appliance manufacturers Haier Group Corp., Skyworth, and Joyoung Co. Ltd. Some Chinese citizens in Jiangsu and Jilin provinces took to the streets on Thursday, waving banners, including one that said, “Lotte, get out of China immediately.”

The U.S. military wants to build the anti-missile system in Seoul to protect South Korea from a possible attack by North Korea, which has launched a series of weapons tests widely condemned by the international community. Beijing worries that the system — the Terminal High Altitude Area Defense (THAAD) — could be used for spying on China.

On Monday, Lotte made the final decision to go ahead with a deal in which it will swap the golf course for other land.

Lotte said it had no comment about any fallout in China over the missile system.

This week’s dust-up in China wasn’t the first one.

Spokespeople for the Ministry of Foreign Affairs have said several times that they haven’t heard of any clampdown on South Korean companies while reiterating Beijing’s strong opposition to the THAAD deployment.

However, the official Xinhua News Agency warned in a commentary in late February that “the consequences could be severe” for Lotte if it made its golf course available for the defense system. Views of Xinhua are generally seen as a reflection of the central government’s position.